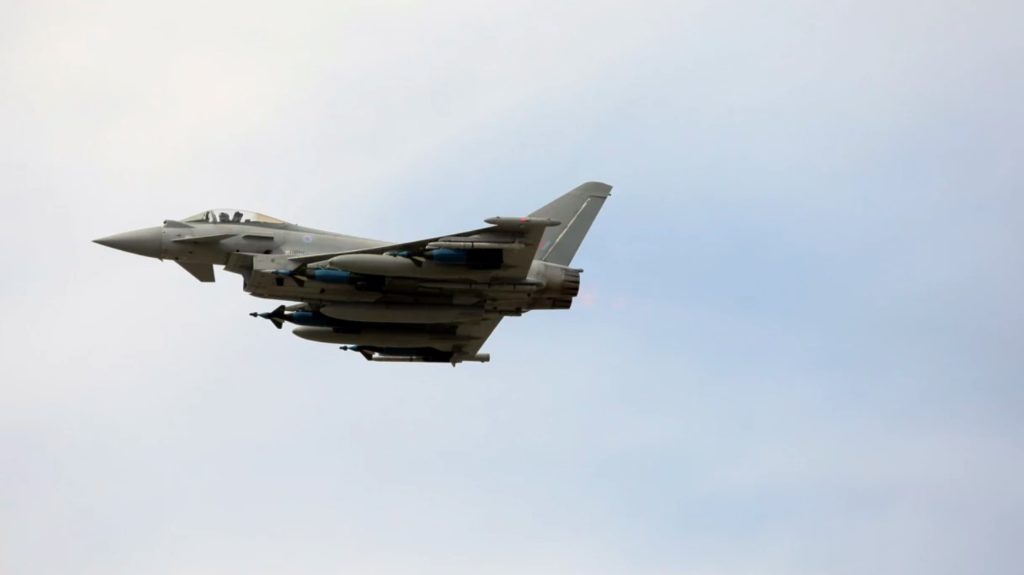 The Btirish Air Force directly targeted Syrian govrnment forces near the border with Iraq and Jordan last month, the Sunday Times reported citing a spokesman for the British Defence Ministry.

According to the report, a British Typhoon fighter jet dropped a 500lb Paveway IV bomb on pro-government forces during a firefight near a British and US Special Forces base in the desert near al-Tanf in the border area.

“As an act of collective self-defence, RAF Typhoons dropped a single Paveway IV on the position, which successfully removed the threat to our coalition partners,” the spokesman said.

This was the first time when the British military bombed Syrian forces since it took part in a series of the US-led strikes on Syrian government forces in April.

The area of At Tanf, located at the Damascus-Baghdad highway, is occupied by the US-led coalition and its proxies. The coalition claims that this is a “de-escalation zone” and it has to keep its military presence there because of the war on ISIS.

Meanwhile, the key area where ISIS terrorists operate in southeastern Syria is the area of At Tanf from which they carry out operations against Syrian government targets. It looks the coalition’s war on ISIS is not very successful there.

Brits go home – and take the yankees with you

Why the news reporter so “gentle” as always .. using ” It looks the coalition’s war on ISIS is not very successful there.” .. Just say it plain and simple .. they are there for excuse for coalition to be there .. and PROTECTED by UK forces.

Make it worldwide news… then these coalition forces will find another excuse. So far , even Assad is not that vocal.

I’m sure Assad isn’t raising a stink about this because those Syrian forces shouldn’t of been there in the first place let alone attacking coalition forces. The SAA does have problems with some local militias which have joined them. There was a similar incident over a year ago when the SAA was advancing from the west to trap ISIS by the phosphate mines. One bunch broke away from the main body and began motoring down towards al-Tanf. Coalition observers watched them for awhile then called Russia to see if they knew anything about those nitwits. For all they knew those guys might of been lost since their groups consisted of three transports hauling a bulldozer and two front-end loaders plus a few assorted trucks filled with soldiers. Russia said they’ll contact Damascus then never did get back with the coalition commander. The coalition sent a few jets in after the group was well past the set boundry line. They buzzed the group a few times then again while shooting cannon rounds over their heads. The group never stopped so the jets wiped out the transports and a few trucks. The jets used their cannons first which gave the soldiers the opportunity to haul ass into the desert before any bombs were used. They piled into the remaining trucks and fled back north once the jets broke off their attack and were circling overhead. Assad didn’t have much to say about either.

What a Bunch of Western MSM Bullshit!!! The United States, the UK & all their other fucking Allies were Protecting ISIS…LIKE THEY HAVE DONE ALL THE TIME & ARE STILL DOING… KICK THESE MOTHERF*CKERS OUT OF THE MIDDLE EAST FOR GOOD!!! NO CONCESSIONS!

Any syrian in entitled to attack any international ilegal invasion force like USA, UK, France, Italy, Israel, these countries are ilegally invading Syria, so any syrian militia has the right to attack them, they don’t need to ask autorization for Putin, or even Assad.

If some armed criminal breaks into my house is my right to explode his head iwth 12ga shotgun, it is the same principle, western invaders are no different from common criminals in this matter.

They aren’t Common Criminals! They Are Psychopathic Evil Massmurdering WAR Criminals of the Worst Kind..! Perhaps shooting them in the Stomach is better…. Gives them some time to think about their Evil Deeds…before meeting Lucifer

And if you catch them alive take them to the crowd for the lynching.

Joe, you still don’t get it. The US is illegally in Syria by any reasonable standard of international law. There is no doubt that the US funded and equipped ISIS during the Obama administration. Don’t you find it funny that everytime ISIS is faced with a major slaughter, the US steps in negotiates a cease fire, and transports the remaining ISIS forces out to areas controlled by the US Coalition? My God I watched 470 buses and 200 trucks paid for by the US DOD transport 2,000 ISIS fighters out of Mosul last year. They were taken to al Tanf. I served many tours in Iraq, Afghanistan and the rest of the Middle East with the US Army from 1987 to 2016. The US and its Allies have no business there.

From the earliest reports it was 3 Stryker vehicles and some technicals in the advance group pushing through a SAA Observation post outside the Al Tanf exclusion area. The point was first hard targeted as early attack by the technicals was rebuffed and SAA fired on their positions in retaliatory fire warning them off. The Typhoon fighter was already on station before the USSOF/SAS and Thawra group launched their attack , funny how they didn’t realize SAA set up a Hardpoint there,lol.

Apparently they weren’t supposed to or allowed to do that in their own country.

He knows but is simply trolling. He’s a juice. So don’t feed him.

I blocked the idiot, long ago.

You seem to know alot of detail. How? How do you know the version of events you have come across is the truth and not a fabrication?

they pay him and tell him, what the truth is.

I hope not! I look forward to his explanation.

That’s even better than mine.

RAF murder SAA forces fighting ISIS. This is another WAR CRIME for which you will be held to account.

Now Assad, Putin and Russian defense minister thinking that elimination of US and Israel from Middle East is necessary to stop bloodshed. Because on 25 June, 2018 the US backed terrorists Israel have targeted Syrian Damascus airport from Palestine by two DIY home made rockets.

Every week the child butcher Netanyahu use chlorine gas barrel bombs and snipers on children in Palestine, due to which many children die on the spot. Now Trump will say in war and in love everything is legal.

stop thinking hollywood and well wish, as a fan does. And those you mention have a very different thinking patent than yours, not based on well wishing, but what practically can be done.

Hey UK! Fuck off out of Syria…You weren’t Protecting the U.S….. You Both were Protecting Headchoppers…. You COCKROACHES!!! MAY All you Evil Psychopaths in Your Government be Judged & Hanged… BLAIR WILL BE THERE…!!!

Per capita, the UK has as many scumbags as we do…

Holland Too…We always Cooperated with The US & the UK, Big interests in Both Countries… Queen Elizabeth & Our Royals are Family…. Says Enough..Brothers in arms…We Looted the East together with the English…

With Israel moving weapons systems to the border with the terrorists in the Golan, the terrorist supporters constantly bombing the Syrian troops in support of head-choppers, it sure would be nice if Russia informed Israel, US, UK, France that any more attacks on Syrian troops for any reason, including false flags, would not see the Syrians getting S-300s, but getting S-400s instead. It’s long overdue for Russia to stop allowing the ‘west’ to create a Viet Nam style environment in Syria, as they have previously expressed a desire to do. It’s time to stomp out the head-choppers once and for all!!!

S-400?! Not good enough, Russia needs to deploy enough tactical nuclear missiles in Syria to whipe out israeli nuclear capabilities in a matter of seconds, that’s something they will respect.

It doesn’t matter how much an air defense is developed, it can be always saturated and will be susceptible to human failure and so many other blind spots.

Offense is the better defense.

True enough, however, Russia doesn’t need to place nukes close to where it’s working to be effective and all the aggressive countries realize this…. the old MAD principle, still true today as it was in the old days.

It seems that murdering thieving countries like Israel, get concerned about even the appearance of S-300s in the hands of Syrian troops capable of stopping their attacks in support of terrorism. Israel isn’t dumb enough to ever attempt a nuke strike on a territory occupied by Russian troops. Their primary mission is murdering while thieving not suicide.

Unfortunately Putin made a deal during Nyahu’s visit to Russia to preoccupy himself with the world cup, so blimey, who bombeb who? No russians got killed? Then it’s okay.

I don’t know about any deal. More than likely, he just doesn’t want a big war beginning in the region. Still, it would be nice if the terrorist supporters knew their aircraft wouldn’t get away with supporting terrorists.

the gay is tradition in british army mdr!!

Self defense? So Syria is invadng London now?

During the illegal invasion of Syria they were defending themselves …. sure.

Just like the ZIONIST Ashkenazi Jews, UNLAWFULLY OCCUPYING a part of Palestine, which they call “Israel”, British, who are, in effect; UNLAWFULLY occupying a part of Syria and Iraq and thus have NO RIGHT to be there, are claiming ”self-defense”

Britain is their land, NOT Syria

What would anyone do if ARMED individuals wearing uniforms, or NOT, occupied a part of your land or farm, and claimed self defense by shooting at you the owner, when you tried to remove them from land you RIGHTFULLY own?

I know what I would do.

“British Military Claims It Struck Syrian Troops In Act Of “Self-Defense”” Oh, yeah.. the ISIS on soil pounded by the SAA, were SAS-criminals, what?

F;UK;US and your democratic freedoms,which really means genocide and slavery to your rothschild banksters.

USA is a Republic.

Surely self defence can not apply to one who has illegally invaded another country & set up shop.

Did the evil UK-Empire imprison Gandhi and Rudolf in self defense also? haha What pathological liars they are. It is the only thing these people know how to do is lie even about lying in the first place haha.

But that Russian air defense! LOL

This is an act of war on a sovereign democratic nation. Clearly this is a violent provocation by Britain and Britain should address their crime.

Self defense inside Syria?

These aircraft have to be visible making their way into Jordan, from Crete. Tell the Brits, if they send them back, they will be targeted – over Jordan.

The only reason why the SAS boys are still illegally occupying Syrian soil is because Putin is being nice. I bet one Iskander would send them packing.

Given that clashes between the Damascus and US backed militias are not uncommon it is likely that the Brits were defusing a larger battle. And given that South Front doesn’t mark that part of the map in black nor has any major ISIS offensive taken place in that area this year SF is obviously trash talking anyone who opposes some they support. This is why your business is failing.

Many murderers use the same defence in court.

They can do crap with this Mickey Mouse shit.

They probably didn’t even do it, could be another attempt by the British to make them look tough and important.

Claims of self-defence are invalid when you’re illegally trespassing with intent to do commit harm.