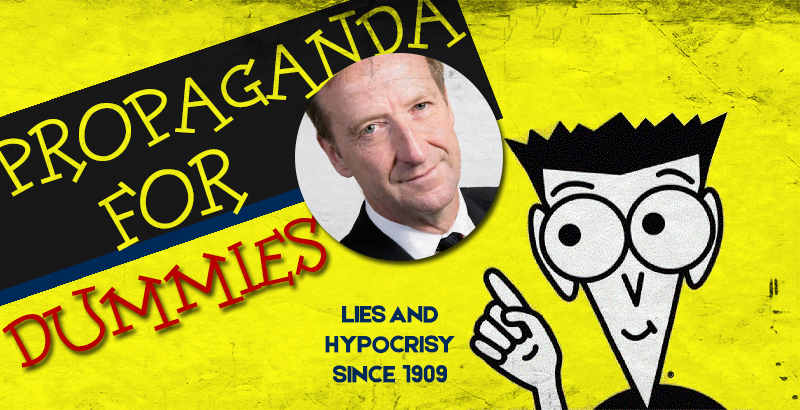 The new chief of the Secret Intelligence Service (also known as MI6), Alex Younger, used his frist major public speech to blame the “Assad regime” and Russia for their efforts to liberate the Syrian city of Aleppo from the al-Qaeda linked “moderate opposition”.

Telegraph reports on the topic:

He said: “In defining as a terrorist anyone who opposes a brutal government, they alienate precisely that group that has to be on side if the extremists are to be defeated.

“Meanwhile, in Aleppo, Russia and the Syrian regime seek to make a desert and call it peace. The human tragedy is heartbreaking.”

The terrorist threat to Britain from militant groups such as Islamic State in Iraq and Levant would continue as long as the Syrian civil war raged, he said.

Just look at this guy. There are two options:

Indeed, it’s hard to say what option is better.

Natural stupidity always seems inherent to this kind of intelligence.

of course he also has to start his new job with a clear signal he’s ready to perform any task of prostitution his zionist masters will ask him.

What’s heartbreaking is how Syria was beset upon by murderous terrorist/mercenary hordes hired, trained, armed, supported and directed by the likes of the UK.

What seriously shocked me, was the funding behind White Helmets, run by Bell Pottinger, who were the PR agency that convinced so many that Saddam was hording WMDs? Now how did that pan out?

I have posted the links, in a previous comment, but look how much the UK Foreign Office has handed over to the White Helmet Terrorists. $83 million, out of the $123 million, excluding the undisclosed payments from other nations? That is $83 million, in UK tax payers donations and did we have any say in how the Foreign Office should spend that amount of money?

Secret Intelligence Services – I wonder why they left the I out?

The broad criminal definition of state terrorism is the use of violence or threat of violence in order to purport a political, religious, or ideological change.

So this is legal in Great Britain?

Would the British government allow a group of armed secessionists to seize half of Manchester and hold it and all the citizens residing in the area by force for 4 years in an attempt to overthrow the elected government of Great Britain?

They appear to be working on it.

However, I seriously agree with what you have said. What would we do if Syria and Russia sent over a load of liver eating, head choppers, to our shores and then instructed a no-fly zone over UK air space, because they do not like HRH or the current Prime Minister?

Well, remember, Perfidious Albion taught the USA everything they know about exceptionalism. Inherited trait, you might say.

The British head of (I)SIS (M16) is clearly giving his government wrong intelligence. His analysis of the Aleppo situation is designed to abort the SAA’s impressive gains and act as propaganda against the Russian – Syrian Coalition. The SAA must go forth in blurts and spurts and eliminate remaining pockets of resistance. The next move will be to pour troops into the flanks of Palmyra and fend off ISIS attacks there. The job must be done in calculated quick time. Palmyra must never fall again into the hands of ISIS bands, Remember the new ISIS wave is an American diversionary strategy designed to relieve pressure on AL Nusra reminants in Eastern Aleppo. SAA, think blitzkrieg! Victory is certain but asymmetric conflict will continue long after your victory. I advise the SAA to identify valiant officers and men from its attack force to build a fresh army that will continue the fight long after the veterans have secured battle victory. Russian and Hezbollah specialists should be co-opted to train this crack future force.

Well spotted with (I)SIS. That was the first thought that struck me, when reading the article. Are they seriously stupid, or now do not care who knows who they are?

When you have mentioned British, this is from British press

An image worth a thousand words The fighters scream anti-American chants as a column of pick-up trucks carrying US commandos drives away from them.

For some reason, I have an image of Toyota Trucks, full of a mix and match of fighters, that Obama happily admitted to funding and supporting. Not sure which are ISIS and which are US Commandos?

If you look at the links and how they all relate to each other, it will explain the thinking behind SIS.

I wonder what the Head of SIS (look how similar it sounds to ISIS), would say, if Syria and Russia sent their liver eating, head choppers, to the UK (not via the Libyan Cruise Passage, supported by Sans Frontieres and so many Common Purpose NGOs)? Then decided that they had the right to invade the UK, because they did not like the Queen being in Buckingham Palace and Theresa May, working from Downing Street?

What a giant steaming pile that is.

It’s not a civil war in Syria when foreign armies and air forces operate with impunity without Syrian approval and tens of thousands of foreign jihadis entered Syria to try to overthrow Assad, the mad dog opthalmolgist.

ISIS is a threat to Britain because it kisses American and Israeli ass by supporting and training al-Qaida and ISIS forces. Britain wages an undeclared war against Syria and then says there’s a “civil war” and Assad seeks to “make a desert” when he fights against Syria’s enemies supported by British toads.

This moron still hasn’t figured out that overthrowing Assad will have the same result as in Libya – chaos and a regime controlled by the ISIS terrorist threat he purports to fear.

The only beneficiary of chaos in Syria is Israel. Hence the US and Britain doing their bidding.

The bullshit just goes on from same sources. Just like their recent claim of 250,000 civilians in East Aleppo last month, but then, hey presto, turns out the SAA are liberating whole swathes of empty – militant only occupied – neighborhoods. There are loads of You Tube videos to show this and the civilian aid requirements are looking more like tens of thousands in whole sector at most. Western governments/ think-tanks/ MSM wildly inflated the numbers to create their standard narrative of ‘impending crisis’ and ‘humanitarian disaster’ to try to intervene and get another ceasefire to save their proxies – alas too late.