British military advisers have arrived to Syria to restore combat capability of the ‘moderate’ opposition, retreated from Aleppo. 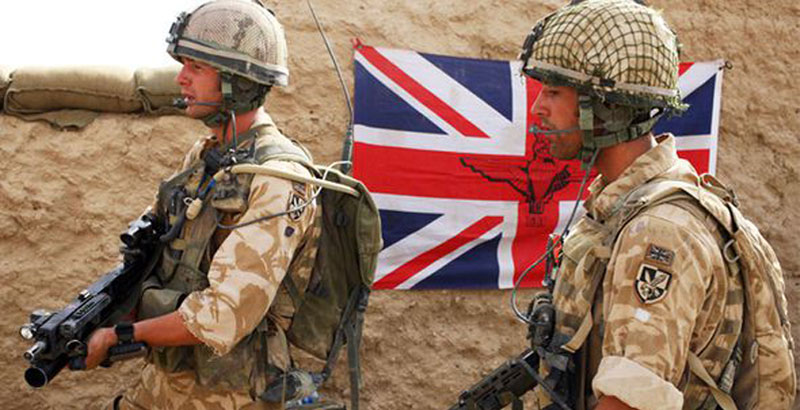 According to media and information from social networks, now the group of military advisors consists mainly of high-ranking officers in the rank of up to brigadier general. The group is guarded by the Elite Special Forces of the UK Armed Forces – the Special Air Service (SAS). Their first task is to evaluate the combat capability of opposition units, escaped from Aleppo, and the condition of their military hardware. Then, they will have to develop a new strategy for the ‘moderate’ opposition and try to unite its military structures under a single command.

As First Deputy Head of the Main Operational Directorate of the General Staff of the Russian Armed Forces, Lt. Gen. Viktor Poznihir, said, an operation on withdrawal of militants, their family members and civilians, held by them, from blocked parts of Aleppo to the province of Idlib is currently conducted. According to reports, the eastern part of Aleppo has been left by 6,462 people, including 3,000 militants, in the first 24 hours of the evacuation.

After the liberation of Aleppo, Western powers seriously fear of discord between survived oppositionists. For this reason, they intend to consolidate disjointed units and turn them into the combat-capable army. Fallon has already promised that British military instructors will train only ‘moderate’ opposition, but not Islamists. The basis of the rebel forces should consist of the Free Syrian Army (FSA) and three other groups.

As an advisor to the Director of the Russian Institute for Strategic Studies, Elena Suponina, noted, the opposition suffered a serious defeat in Aleppo.

“The oppositionists retreat to Idlib province, but it is broken up units, which are in a very difficult relations with each other,” the expert told Izvestiya. “The groups are disjointed and weakened.”

Suponina suggested that the UK will not be able to form the combat-ready and competent forces from the surviving militants.

“The British try to somehow save the situation after the defeat in Aleppo, but before this the Americans also have tried to create the efficient opposition and completely failed with this,” she said. “Most likely, the British experience also will be not so successful.”

That doesn’t make sense. The problem with the so called “opposition” is not weapons or even training, they get that courtesy of the US/Sauidi/Quatar etc etc…

The real problem is they are a bunch of dogs that eat other dogs, they literally eat each other…

Time for some more pinpoint cruise missiles I think. I hope so anyway.

You are absolutely right! That is the only thing that can deter those pro-jihadist fags!

My Grandfather had a son that went in (Greece) the year of 1939 and the Brits kept him on the front line until the very end. He was a very bitter man until he died. What do you expect when 98% of your comrades in arms get killed, but the theory is that battle hardened men will never do well in a peaceful civilian life. This is also one reason that the USA has so many police shootings (, they first where battle hardened troops from the recent wars of Iraq and Afghanistan).

One of one of the cop killers had been a cook. A combat cook, no doubt. Bitter and dangerous!

Now we know why Sam Powers was going bat-shit crazy; her special forces troops in Aleppo were close to getting caught, and now they have!

US, Israel and Saudi special forces caught by the Syrian government in Aleppo; Identified as belonging to NATO?

Two the ameriKKKan is one of them.

NATO officers busted in Aleppo… Anyone could confirm this? http://www.voltairenet.org/article194590.html

Thierry Meyssan is generally well informed when it comes to sources in the Syrian military, but he also spreads lots of rumors.

The Eye
Reply to  Celio Carvalho

There is no way this icould be false. US advisors have been caught in other conflicts in similar situations.

abuqahwa
Reply to  The Eye

Yes but why are they always set free, even when they have directly killed/kidnapped local people ?

Hey Southfront, may I make a suggestion, when I click your logo or name, could you make it to take me back to the main page?

Sooner or later this will have to stop

Time for Syria not to take any prisoners.

Train them to get blown up by Russia ground attack aircraft.

These advisers are in danger(not that I mind). There may be targeted strikes. But the jihadists might also start waking up to the fact that they are being used as dog-soldiers in an imperial game. Unless the game plays to perfection, they have no stake in it at all. They are simply soil fertiliser. And the advisers are standing right next to them, urging them on…

goodluck with that. The Ruski special forces is around there somewhere to kill your field commanders, one head at a time.

YES, Putin sent two battalions of Khudarov’s men from Chechnya to fight in the liberation of Aleppo. And believe me, these guys are real mean, nasty adversaries. These same Chechens whipped the Georgian Army, Ukrainian Army and are considered among the best fighters in the Russian Federation. They also played a big part in the Battle of Stalingrad in WW2 and even since the days of the Czars, they were used as shock troops.

When Trump takes office on January 20, 2017, no more American support. Hopefully SAA and Russia will be able to destroy all of the headchoppers.

Not sure about Trump. He could create mischief elsewhere.

Don’t bank on it.

Nothing is 100%, for sure. But I believe there is a better chance of it happening than not. Time will tell.

This is preposterous !! The British Army must first solve the cronic level of SODOMY in its ranks !! They haven’t won a single war since the 1700s and just wote FAKE History since then !! If I’m not wrong, I think the first cases of MALE PREGNANCY occurred in the British Army !!

I do so love the arrogance of the West. Do these so called “advisers” really think they can teach the rebels anything other than possibly how to use any new weapons that are being supplied by the Brits. The purpose of the “adviser” is to gather intelligence, period. In the time I spent as an “adviser” I learned more from the troops I was supposed to be training than they did from me. They knew more about fighting their war than I ever would or could know.

They are the true terrorists.

The west is facing a moral crisis over Syria. These soldiers asked to train jihadis should outright refuse.

Maybe a Norwegian pop song pissed him off. Who knows.

I don’t know how you got Norway on that list, but your reference is very helpful.

Time to put Britain on the list of states supporting terrorism.

The US and all it’s vassal states are the supporters of using terrorism to achieve their objectives.

Aleppo liberated from one of NATO´s terrorist cell.

How is that garbage being allowed to enter the country? Stop shipping terrorists to locations within the country, just kill the bastards and these stinking britfags need to DIE.

Lisa the US/FR contingents enter Kurdish areas of northern Syria from Iraq, the BR into Idlib province from Turkey ( Reyhanli base ) and earlier into northern Aleppo province also from Turkey. As a NATO memmber Turkey has, and continues to pour terrorists, weapons and foreign “advisors “into Syria on a massive scale. Without these replacement cannon-fodder Idlib would have been returned to Syrian control long ago

Thanks, I really don’t understand why they are not blasted to hell the minute they cross the border.

Thought that British advisers operated in far away Al Tarif border crossing to train FSA, much safer there. May be foolish to send them to Idlib province. With so many Jihadist returning there, it may become a target rich environment.The turk and saudi advisers blend in much better.

All these NATO (US/GB/FR/BE) so-called “advisors ” have dual roles : As commented by XRGRSF apart from giving instructions on operating brand new weapons and equipment (MILAN, TOW-2, variants of LAW, tactical radio nets etc..) the main role is test out, evaluate weapons effects and learn tactics, techniques and procedures of all forces, including the SAA and Russian air and ground. All sorts of valuable lessons are being learned in a hot battlefield environment by NATO which is why they will continue to prosecute and prolong this war forever. NATO loves this war for this opportunity to try out all sorts of weaponery and munitions on live targets (i.e humans but Arabs don’t count as real people for NATO or Israel) with zero risk to their own countries or armed forces. Right from the start the British Sovreign Base Areas in Cyprus have been operating in full scale war mode from supplying real-time tactical intel on SAA locations, movements and intent, to weapons supply, ground-air liaison and Tacair teams, logistics support/resup etc.. The big 3 US/GB/FR warmongers are in this for the long haul, not for one minute have they weakened in their determination to dis-member and destroy Syria. As for the “advisors “on the ground they are loving the adventure, kudos, extra danger money, medals and promotions while their home countries praise them as “heroes/our brave lads” and their families sleep safe unlike their victims across Syria. I posted before and repeat : You foreign warmongers are not wanted in our land. Get out

I feel you brother.

Their ruling vampires have been allied with those in America and Canada in a conspiracy for world hegemony for over a century. Think Rhodes, Milner, Rothschild.

The damn Brits spawned the forsaken bastard entity called Israel. Effectively an experiment based on racist ideology that wont survive another 25 years tops. Another bootlicker of the Jews was Britian’s Mr. Balfour, among others. I say loud and clear, TO Hell With Her Majesty.

Poor unsatisfied Eliabeth! Which way she walks is Hell.

Did you know that Winston Churchill was Ernest Cassel’s creature for about a decade of his father died?

You know that Walter Rothschild wrote the letter that Balfour ‘sent’ to him, right?

An immediate call of protest at the UN , the UK has no legal right to send troops to support the jihadist , this madness must stop . Syria and Russia must win the PR battle , start with LAW .