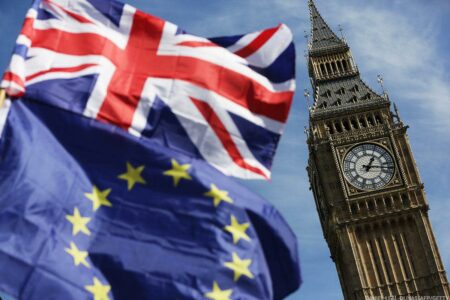 British elites should take responsibility for policies on the conflict in Ukraine and the costs of it.

As recession and even depression haunts the EU, in the post-Nord Stream world, the UK in turn has its own problems. Prime minister Liz Truss has said that “Britain’s economy needs a reset”. Supposedly, it all started with the £45bn “mini budget” which was presented last week. The markets did not respond well: investors’ reaction was to sell the pound and to offload government bonds, thereby increasing the interest bill paid by the British Treasury.

All hell has broken loose: the pound fell to a record low against the US dollar, banks unprecedentedly pulled thousands of mortgage products from the shelves (thereby hurting Britain’s housing market), gilts sold off quickly (yields on five-year gilts went up by 50 basis points). The Bank of England in turn even launched an unprecedented £65bn emergency bond-buying programme to stabilize government debt markets and to stop pension funds collapsing.

Meanwhile, markets are betting Britain’s interest rates could peak at 5.8 per cent by next spring, thus creating what some have described in anticipation as an “embarrassment of riches”. Bankers however certainly have not lost sight of the fact that, amid a recession, businesses bust and therefore loan losses go up. Ironically, the rising interest rates are the very thing that in all likelihood shall bring on the British recession. And, according to Tim Worstall (a trader and a Senior Fellow of the Adam Smith Institute), the Bank of England is raising interest rates precisely to bring on a recessionary situation so as to “wring inflation out”.

But has the United Kingdom really collapsed over the new government’s budget? It is in fact the only G7 country with a smaller economy than before the pandemic. Irish economist Philip Pilkington argues that “ridiculous” as the budget may have been (basically an “expansionary package” in an economy already suffering from high inflation and trade deficit), markets and the City of London have been concerned with “out-of-control trade deficit” and “high inflation” for a while. Paraphrasing James Carville, one could very well shout “it’s the energy, stupid!”.

All such imbalances have really been driven by energy costs, as the British import a lot of energy – therefore, when such costs rise, they are passed on to consumers, and thus follows inflation. This is a European crisis, but, according to Pilkington, it only took longer to hit the UK and merely because it does not rely so much on manufacturing like Germany, for instance. Be it as it may, now it is Britain’s turn and Brexit could not avoid it. Phillip Pilkington and other experts now fear the collapse of European economies may have just begun, starting with Europe’s “weakest economic link”  – namely, the UK.

High energy costs, finally, have everything to do with a financial warfare against Russia which has backfired. Moreover, Washington has campaigned heavily against Nord Stream 2, the German-Russian project which, truth be told, could have helped to overcome (or at least minimized) Europe’s energy crisis; a crisis that has served American interests well.

After Nord Stream pipelines are gone (in all likelihood as a result of sabotage), there is no going back now on Russian sanctions to solve the situation and energy prices are to remain high. The hard truth is that beneath today’s Europeans and British lies the cost of a war that is taking a heavy toll on Europe.

Notwithstanding any criticism one might make of how and when Moscow decided to conduct its current military operations in Ukraine (after 8 years of Ukrainian offensives against the population of Donbass, in Europe’s “forgotten war”), the fact that the roots of the current conflict lie in NATO enlargement has been acknowledged by different political scientists, and similar Western “containment” policies targeting China over Taiwan risk producing similar disastrous results. However, besides geopolitics, there is also another angle.

I’ve written on how this energy issue is an angle of the geoeconomic dispute between Washington and Moscow which has not received enough attention: US interests in selling its (more expensive) LNG to Europe have driven Washington to adopt over the years a series of legislative measures  imposing sanctions on companies involved in Nord Stream – here, as often happens, private interests and government corruption intertwine with US geopolitics.

By embarking on the US-led NATO plans, European powers and Great Britain have put themselves in a situation in which they have much to lose.

Add to this the timing of Queen Elizabeth’s death (and the immense costs all transition procedures will bring) as well as the challenges faced by the new unpopular King to maintain unity, in an already divided United Kingdom, troubled as it is by the post-Brexit Northern Protocol border crisis, and by the reemergence of the Northern Ireland loyalist-republican conflict.

With a coming winter depression, rising interest rates and British banks set to make abundant profits amid a mortgage market freeze, how can the voice of populism possibly not grow louder and louder? The perception that European elites are acting in a Nero-like manner is becoming harder and harder to escape. I’ve also written on how populists and the so-called far-right, such as Marine Le Pen and Viktor Orban, have been capitalizing the growing discontent with NATO and the EU itself – which is in fact a popular phenomenon, although largely politically marginalized in the continent.

To sum it up, it is about time European and British elites take responsibility for their policies pertaining to the conflict in Ukraine and the costs of it. But a way out of the economic and political crisis seems far away.

The Brits have always relied on booty from Imperialism conquest. They are sitting on any kind of resources and must support a population like the Philippines. They are reliant on Natostan for almost everything and they bottoming out on all levels. Even India is leaving them now in the dust and this inport energy reliant British nation will be needing all the help to maintain, as they are now a Third World Nation. Russia hasn’t even begun to get started and China hasn’t entered the conflict. Printing unlimited dollars and currency, even, as these Western Nations bottom out. It’s evident they have been killing economy with Green Plan and Covid with the WEF leadership army. Neo Liberals, Democrats, Deep State, Unelected European Union, Leaders in Australia, Canada, New Zealand. Depopulation and complete subjugation at their core.

great I left the eu, may come back and buy it all up or move to russia, just what annoys the jew world order the most:P

I hope the winter cold wipes out all of the nogs, wogs and muzzies since they did not evolutionally adapt to colder environments with less sunlight.

It’s one thing to live in urban centers in a cold environment, it’s something else entirely to live without artificial heating.

Whatever dumb bitch, no one gives rats ass for your gay garbage and how many black dicks your mom suck each day.

You realize Stalin engaged in the “socialist fraternal kiss”? Him and Mao were pedophiles too.

Fuck white people. The screwed up the planet with their greed and lies.

I can now see why ALL of President Putins acceptance of the Donbas election speech has not been shown in the UK and most of the EU.

President Putins speech effectively outlined the lonely and desolate path that the UK and EU have been forced to take by the US.

ALL of this disaster for Europe is because European leaders, excepting Victor Orban, are spineless cretins who will hopefully face the anger of the ‘People’.

Behold the Lizzy Loon baying at the Moon.

I had no idea Monty Python was a documentary.

Perhaps the plan is for the UK and European economies to collapse, people to suffer and get riled up. It worked like a charm last time a big depression was orchestrated. People suffered and goyim went to war with each other. The rich got richer while eating caviar. The poor got rations, got bombed, got killed and maimed, and have been paying the mortgage on that war ever since to the ones that engineered it.

What about depression in Russia? Oh, wait – it is still going on since 1917

Another bullshit article. Look retards, the Western economies will never collapse, these criminals own the printers and are allowed to print to infinity without much problems. The rest of the world is screwed as they aren’t allowed to do this, their currencies aren’t the global reserve currency. The only thing that will collapse the Anglo-Zionist economies are hundreds of Sarmat strikes at their population centers.

That’s it. The rest of the world is too stupid to understand the western white mans hegemony and instead go along with it, happy to collect the scraps that fall from his table. Idiots.

Nope, every ponzi scheme has and ending and a bad one. The USD has been collapsing all the way. That is why US banks are rigging the markets to cover for those losses. The US is nothing but a country with the highest debt in the world and world history. That is why they lost their manufacturing economy to China. That is why they will go bankrupt soon. World is trading a lot with local currencies now. USD will be abandoned soon and a tsunami of inflation will hit the US. The USD has lost 97% of its value already. The remaining 3% will not hold for long.

Nonsense. I’ve been hearing ‘the US economy is about to collapse’ for decades, and nothing happens. The US has the world reserve currency, military bases in every country on earth almost, and the ability to print money to infinity. No other country has these things.

Porc halal and kosher at the same time

Unemployment rate is historically low, foreign investment is historically high. property prices are going down – predictions are they will be 30% cheaper next year. What is not to like for the British public?

Did that come from Tory Party Central Office or the Atlantic Council ?

You obviously live in a paid poster wonderland – its so far from the truth and so are you.

Good luck with trying to get the British elites to change course. The Tory and Labour Governments have been dancing with power forever and they dance to the tune of the elites. This will never change in Britain because the way the system is set up is to favour the wealthy and the elitist politicians. The people of once Great Britain have become meek sheeples and will never wake up from their sleepwalking. The onset of nuclear war will only for a brief moment make them realise their stupidity before the nukes destroy them.

When those 5 million Romanian pimps, roques and prostitutes will migrate back to the shithole they cam from, only then the GB economy will be in it’s rightful place.