HMS Duncan, which was among six NATO ships, involved in tracking of the Russian battle group, led by the Admiral Kuznetsov, has broken down, when it was on the way to military exercises with NATO ships. 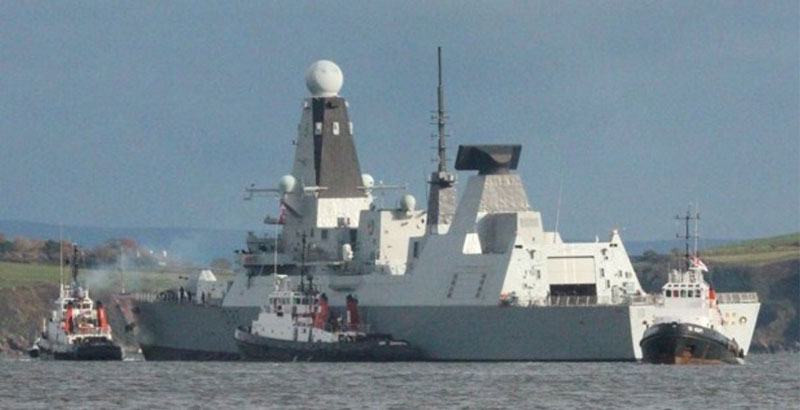 The Duncan air-defense destroyer, which is one of the newest ships in the British Royal Navy, broke down, when it was on the way to military exercises with NATO ships, the Herald information website reported on Wednesday.

According to the website, the vessel left Devonport on November 21, and on the morning of November 23, residents of the port city spotted HMS Duncan, being towed back.

Representatives of the UK Defense Ministry said that the decision to return the destroyer to the base was taken in order to assess arisen technical problems.

In October, the British destroyer was among six NATO ships, involved in tracking of the Russian battle group, led by the Admiral Kuznetsov heavy aircraft-carrying missile cruiser, moving to the Syrian coasts. 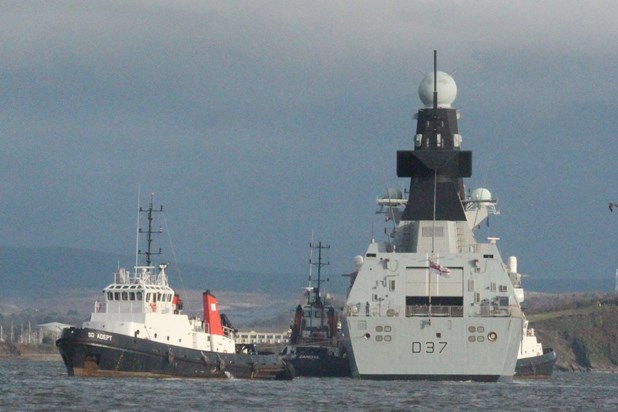 HMS Duncan, which became a part of the Royal Navy in 2013, is the last representative of destroyers of the Type 45 project, which was launched in 2003. At the moment, the UK has six such ships. They are armed with the PAAMS air defense missile system, 114-mm artillery cannon, automatic anti-aircraft guns, as well as with antisubmarine and antimine weapons. The vessel is also capable to carry one helicopter.

Will remind, the battle group of Russian warships departed to the Mediterranean Sea on October 15. One month later, the ships were involved in a large-scale operation against terrorists in Syria. For the first time in history, the Admiral Kuznetsov aircraft carrier has taken part in hostilities. The Admiral Grigorovich frigate has committed launches of the Kalibr cruise missiles. In addition, the Bastion coastal antimissile system is actively used.

Airstrikes are carried out on warehouses with ammunition, training centers of terrorists and plants for manufacture of mass destruction weapons, located in the provinces of Idlib and Homs.

LOL, your comment has made me laugh, in a nice way.

What is even more ironic, is that our UK Government sent our 3 Aircraft Carriers to the Turkish Scrapyards, after $multi-million refits (each ship). They are now no doubt lined up in one of Kerry’s wife’s Heinz factory, on a conveyor belt, waiting to be filled with baked beans, or similar.

We are building two more, one might be sold rather than kept, however we also part exchanged our Harriers to the US, in exchange for their $trillion F35 planes, that do everything but fly or allow the pilot to see where they are going or what is around. In fact, how many years are they behind their programme and how many decades will it take, for the UK to be supplied? Haha, the wonders of MOD Procurement.

Then you have the fact that we mock Russia’s aircraft carrier, whilst ignoring what was on board and what else the fleet provided? As you say, our new ships do not look good, having a tug esccort back to port and yes I am laughing at the irony of karma.

This is the state of new advanced weaponry produced by US and its NATO partners. The zumwalt destroyer, a “stealth” vessel broke down around Panama, and not to mention the combat littoral ships. What happened to ships with older technologies that had redundant systems to prevent such embarrassments?

Overpriced garbage that puts money in the pockets of the military industrial complex and endangers our fighting men and women. Most of the billions spent on our military goes to enhance and maintain the lifestyles of the “rich and shameless”!

Trump will make the military industrial complex suck wind. He will never agree to such outrageous price tags for weapons that are in development, he will make them eat a lot of the costs and demand a viable product…..or not get paid. The government will get value for every dollar it will spend.

At least that’s what we hope for. But if history’s anything to go by, politicians will string us along until we get them in power, only for them to show us they’re no different from the other guys.

Except that Trump has actually gotten a couple of things done already – and he hasn’t even been sworn in yet. I think we may be pleasantly surprised this time.

I certainly hope for a pleasant surprise.

Trump is not a politician, he is a business man, such poor practices and outrageous prices are not applicable to businesses. They do not get payed, and they will be forced to make restitution for contractual breeches, political hacks that get contributions let them slide with all this corruption and ineptitude.

Didn’t his last hotel come in underbudget and ahead of time?

MOD Procurement can never, ever say that. Still the shareholders seem happy, so I guess that is all that matters.

Interestingly, while nowhere near as grand as a cancellation of the F-35, L-M is already crying, because somehow DoD suddenly found the nerve to state that for the 57 F-35s of allotment 9, they would only pay 107 million apiece. While that is still absurd, it’s a few hundred million less than L-M was expecting.

I think Lockheed is going to have more serious problems getting paid by Trump for their products. IF effective EW would neutralize the F-35 electronic capabilities, the plane is a generation 3.5 fighter bomber. The. F-4 would do better than F-35 in an intense EW environment, Trump will use these points of contention to pay a fraction of what Lockheed anticipates, or altogether cancel the program and start with a bread and butter type of aircraft that is reliable, manuvrable, carries a heavy payload, and is not solely reliant on stealth or computers and electronic linkages. The pilot has to have some skills in flying and maneuvering the plane and successfully engage in WVR air battles.

I really hope so. Nobody scams the US military for quite as much as L-M. Them going out of business would be about the best single event that could happen to US defence procurement.

It is not just the ‘Zumwalt’ which Russia and China can easily view, but she seems to be invisible to merchant naval ships and fishermen.

Littoral – US Combat ships – have all had to be returned to port, owing to major problems. The new USS Aircraft Carrier Ford, has exploding generators. The F35 – $trillion and a disaster. F22 – the pilots refuse to fly and why is that? $40 billion ‘First Strike Missile System’ now obsolete and over a decade trying to pass operational tests. She is still not in active service.

This is how military qualitative advantage US possessed in the early 2000’s has been wasted with idiotic concepts and weapon procurements systems. The trend is similar to globalist trends that have defrauded US and its citizens and other countries, for their personal benefit. These globalist do not care about the country, they only care about themselves and how to get richer and project their riches by buying power and authority, making local governments subservient to their whims and agenda.

So true and it is the same in the UK.

“Old” Kuznetsov makes it to the Syrian coast in the Mediterranean Sea , the new British Duncan can’t even make it to an NATO exercise of the coast of England. Well karma is a bitch isn’t it …

Telegraph (UK) is also running this, but South Front comes out first.

I wonder if they got this ship from the US…

BAE, I checked who supplied it and it explains why it is rubbish. However, they are all linked into each other and anything to keep the shareholders happy.

Mmmm… S.P.E.C.T.R.E seems to be active once again !! Bond must be on vacarions in the French Alps !!

Wasn’t SPECTRE based on Soros?

lol, even better would be the west accidentally nuking tel aviv…..lol

It hard to believe after years of design, development, planning and billions spent, that ships such as this and the Zumwalt would be unreliable. Subterfuge anyone?