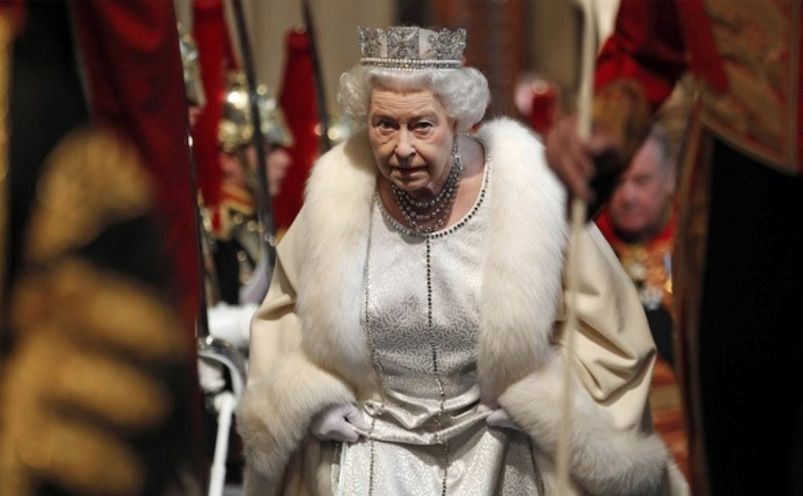 Acareful survey of British intelligence operations around the globe reveals a clear picture: The British Monarchy is provoking war and chaos in every corner of the globe, in pursuit of the stated goal of reducing world population by 80% or more in short order.

The British hand is most visible in the Persian Gulf, where London’s wholly-owned junior partner, the Saudi Monarchy, has instigated a new perpetual war between Sunni and Shi’a, Arabs and Persians, triggered by the Jan. 2 execution of a leading Shi’a cleric from the oil-rich, Shi’a-majority Eastern Province. MI6 mouthpiece Ambrose Evans-Pritchard gloated in the pages of the Daily Telegraph that the execution of Nimr al-Nimr will lead to violent retaliation by Shi’a protesters, acting under orders from the Iranian Revolutionary Guard Corps, to include attacks on the major Saudi oil pipelines. This, Evans-Pritchard declares, will lead to $200 a barrel oil prices and a global economic crash.

The British Crown has been pursuing two critical policies in recent years: The provoking of the perpetual Sunni versus Shi’a conflict, to ultimately engulf the entire Islamic world; and the orchestrating of a New Cold War, leading to inevitable thermonuclear hot war, pitting the United States against Russia and China. British pawn Barack Obama has brought the United States to the edge of war with Moscow and Beijing, as has been recently noted by Russian President Vladimir Putin, with the release of Russia’s new National Security Strategy, which highlighted Washington and NATO’s policy of “color revolution” regime change, ultimately directed at Russia and China. Former U.S. Defense Secretary William Perry has warned recently that the U.S. is on a trajectory for thermonuclear confrontation with Russia, and it must be stopped now.

The announcement on Jan. 6 by the North Korean government, that they successfully detonated a hydrogen bomb, has put all of Asia, once again, on a hair-trigger for confrontation, compounding U.S. Defense Secretary Ashton Carter’s repeated provocations against China over the South China Sea.

While promoting Washington-Beijing conflict, the British are themselves courting China, to secure the City of London as the center of global yuan trading, at the same time that they are doing everything possible to break up the BRICS alliance of Brazil, Russia, India, China, and South Africa. The latest issue of the City of London flagship publication The Economist, features extensive attacks on Brazilian President Dilma Roussef and South African President Jacob Zuma, whom London has identified as the weak links in the BRICS chain. British Foreign Secretary Philip Hammond was in Beijing, staking out London’s position as the bridge between China’s Asian Infrastructure Investment Bank (AIIB) and Europe.

At the same time, the British are also pursuing the option of sinking continental Europe, under the already-unraveling chaos of the bail-out and bail-in policies, that went into effect on Jan. 1, 2016 across the entire European Union. Prime Minister David Cameron announced on Jan. 6 that he will be freeing all members of his cabinet to choose how they campaign for the upcoming referendum on Britain’s withdrawal from the European Union. That referendum is now scheduled for this summer, at a point that continental Europe is expected to be facing all-out social chaos and/or war. In effect, Cameron’s actions are paving the way for a full “Brexit” from the EU, on a greatly accelerated timetable.

Those who fail to understand the British factor are doomed to succumb to the mass kill program that London has in store. The trans-Atlantic region is under the vise grip of the British System, and is coming apart at unprecedented speed. This is not the result of bad luck, but willful British policy. Prince Philip, the Royal Consort has openly declared his goal of wiping out billions of human beings to preserve British power under a depopulated global Malthusian dictatorship. It is in the public record.

With the British tool Barack Obama entering his final months in office, the British are clearly accelerating the mass murder program. It can be defeated, starting with the removal of Obama from office for high crimes and misdemeanors, and by wiping out the power of London and Wall Street. By ousting Obama and reinstating Glass-Steagall, the monster that is the British Empire can be decisively crushed. For the first time in recorded history, the world can be freed on a permanent basis, from the genocidal scourge of Empire. That is the challenge on the table at this moment

Re-enacting Glass Steagall will not stop them – it’s a detail. Their plans have been centuries in the making and you need to trace it back via the symbolism to their partners in crime – the other institution whose supreme head wears white. The British took over the global financial system from the Venetians (see Webster Tarpley on this). The Venetians were the banking/financial arm of the Vatican. Their agenda is reaching end point and the only thing that will stop it is a cataclysm environmental event that will take these parasites out and let us start again.

SEE WEBSTER TARPLEY ON THIS. do it. Start with Webster. And continue with your own research to proof right or wrong, what Webster says.

I was born in the UK (live somewhere else) and I find this a bit far gone. Sure the UK like other nations influences but this (no references, sources, etc) overstates the degree of control and influence to a point of being absurd.

u r right: …….(no references, sources, etc) overstates the degree of control ….. on the other side history tells me, that it is indeed The City, who makes the policy. USA supplies only the Army and money. Indeed it is UK, who calls the shots and organizes the script. You just look at Venetian Republic, which is located today on Thames.

lol yeah must have been the product of vodka

If Britain had any interest in preserving its power, you’d think they’d start by having above-replacement birthrates??? Seems mighty strange for an expansionist group to simultaneously be commiting autogenocide.

Here is a link to the Ambrose Evans-Pritchard article http://www.telegraph.co.uk/finance/oilprices/12081550/Saudi-showdown-with-Iran-nears-danger-point-for-world-oil-markets.html

“The Persian Gulf has become a strategic tinderbox. Saudi Arabia’s drastic decision to behead the Shia cleric Nimr al-Nimr marks a point of no return in the bitter Sunni-Shia conflict engulfing the region. It is a dangerous escalation in the Kingdom’s struggle with Iran for regional hegemony.”

Sound like criticism of a reckless and increasingly desperate Saudi government to me, not gloating, oh and this is all a plot by an old lady 3 months from her 90th birthday, clearly the author has little experience of people of that age.

The rightful British crown was murderer by Norwegian invaders, These Norwegian-supremacist wiped out the tribal leaders of England, and replaced them with foreigners. These impostors who are really Norwegians, pretend to be the rightful dictators over the once indigenous tribal English people, who have now mostly been racially replaced with invaders. Much of England’s historical bad rap, has actually been Norwegian policies, hidden under the lie that they are English.

so its the Norwegians who are behind it all?

The ‘ihr’ website looks like a great resource. Do they allow competing analysis too? Not all historians agree on their conclusions of same subject matter. Wish the site had an RSS feed.

I follow South Front and I generally find most of your articles interesting and shedding an alternative view of global events which I think is very important. But this article – seriously, I double-checked to see if it was April Fool’s Day. Suggesting Britain is after war and a reduction human life….what a pile of RUBBISH. This idea that Britain wants a nuclear war is quite laughable. I don’t know what you’ve been smoking but you need to keep off it. Britain has been scaling back both its conventional and nuclear capability for a number of decades now and that’s not the policy of a country that wants war. Russia and its military budget however…..that’s going in a very different direction. Sinking continental Europe?! WTF are you talking about?! We’re making a democratic choice as to whether we want to be part of a union that is integrating in a way many of the British people have concerns about. Some want to stay, some want to go. So we’re going to have a choice. If we leave we’ll still work with the EU, just not be part of it. It’s called democracy. Besides, you should read your history books. Britain has been an advocate of the EU as it promotes European stability. What would be the reason to sink it? You have no idea do you? As for Prince Philip openly suggesting billions should die…..honestly dude, WTF are you on? Let’s see a quote then? I’m sure the world’s press (including the Russian and Chinese) would have been quoting that left, right and centre. Anyway, Britain donates more to global aid than any other EU Member State – hardly the practice of a country promoting an 80% reduction in human life. Whoever wrote this needs to go back to school.