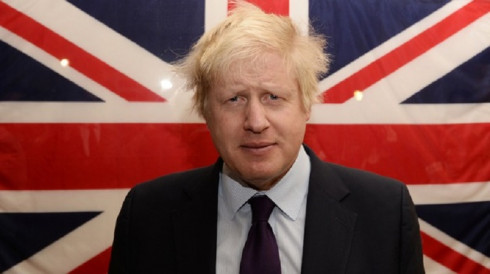 Distracted by geopolitical games, the British PM has yet to get a handle on the current supply chain fiasco…

Boris Johnson may be making strides on the geopolitical front, pursuing his Global Britain strategy and forming new alliances in the form of AUKUS; but on the home front things are falling apart. Empty shelves in supermarkets, queues at petrol stations with people now carrying in jerry cans to stock up on fuel – the post-Brexit era has arrived with a vengeance.

We know that the Prime Minister is a fan of Winston Churchill, but it seems he’s carrying his adoration of Britain’s famous war-time leader a bit too far. It’s well known that Churchill was not as competent at the domestic agenda, and his popularity waned after World World Two. With an announcement today, in the middle of the current fuel crisis, that Johnson wants to send rockets to space in a new ‘Galactic Britain’ project, it’s clear this PM’s thoughts are literally light years away from what’s happening on the ground.

A chronic shortage of HGV (Heavy Goods Vehicle) drivers has meant that, although there is enough fuel, it’s simply not getting to the petrol stations. Panic buying has set in, with people frantically bringing in jerry cans to stock up. This has resulted in some petrol stations rationing petrol to £30 worth per customer. The army is on stand-by to drive the trucks. It’s nothing short of apocalyptic.

The driver shortages have created problems throughout the supply chain, with empty shelves in supermarkets symbolizing the stark, cold reality of Britain after Brexit. Not that the government will accept this. Johnson, a pioneer of Brexit, will be the last to admit that leaving the European Union was to blame for the lack of haulage drivers.

Across the English channel, others are not so sure. The French European Affairs Minister has said the current fuel crisis is indicative that Brexit was ‘intellectual fraud’. In Germany Angela Merkel’s potential replacement, Olaf Sholtz, agrees that Brexit is to blame. Despite the British government’s reluctance to admit this, its position is looking increasingly difficult when it’s already having to U-turn on its immigration policy to arrange visas for around 5000 migrant workers to cross over to the UK from Europe. This contradicts one of the main selling points of the Brexit campaign, that immigration rules should be tightened to give British workers more opportunities instead of migrants.

The current crisis may in fact highlight that in this globalized world, the government’s position on migrant workers is not sustainable. The fact is for years now in Britain, foreign workers have filled roles that British people are not prepared to take on. Haulage driving is heavy, tiring work, with long hours and not great pay and conditions. Often drivers are expected to sleep overnight in the vehicles, and breaks are few and far between. The same goes for seasonal fruit picking, which for decades has been done by Eastern Europeans as locals aren’t prepared to endure back-breaking work for little reward.

As a result, it would not be at all surprising if the current government U-turn on immigration turns out to be something more long term. Like other aspects of Brexit, such as the impact on the Irish border and the threat to the Union posed by Scottish independence, it seems so much was not thought through. This was pretty much admitted by Dominic Cummings in his bombshell interview with Laura Kuenssberg earlier this year when he acknowledged the Leave campaign won on false promises. For Cummings, Johnson and other Brexiteers involved in persuading the British public to vote to leave the EU, the whole thing seems to be nothing more than a childish fantasy. With no concrete strategy or planning in place, of which the fuel crisis is an indication, it seems Johnson’s team aim to get by ‘on a wing and a prayer’.

The public’s panic buying is also a sign that people recognize this and, as was the case at the beginning of the Covid pandemic, they have no faith in the government’s management of the crisis. With a PM banging on about Global Britain, sending warships through Russian and Chinese territorial waters in what are nothing less than provocations, but who has still not addressed the nation about the fuel crisis, it’s clear Johnson is not cut out for practical, hands-on management. He’s an ideas man, and an entertainer, producing a memorable UN speech this week when he managed to quote both Socrates and Kermit the Frog in the space of a few minutes. Being a fan of the Classics, perhaps he would be better advised to recall the fate of Roman Emperor Nero, famed for ‘fiddling while Rome burned’.  If Johnson doesn’t get a handle on this crisis, and show some leadership, the British public may not forgive him.

I know this is a stupid suggestion, but why don’t they offer long haul drivers much better pay and benefits so as to attract enough British drivers?