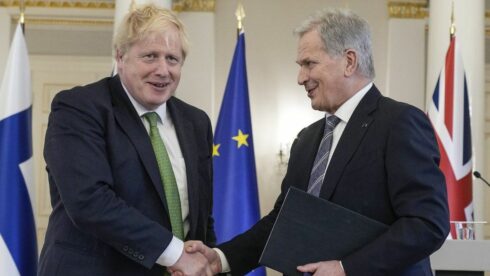 On May 11, the UK has signed mutual security pacts with Sweden and Finland, agreeing to come to their aid should either nation come under attack. UK Prime Minister Boris Johnson visited both countries to sign the deals, amid debate about them joining Nato.

The agreement says: “We have affirmed that if either country is affected by a natural disaster or attack, the United Kingdom and Finland will, at the request of the affected country, assist each other in various ways, which may include military means. This cooperation will remain fully consistent with each country’s security and defense policy and is intended to complement, not replace, existing European and Euro-Atlantic cooperation.”

The document also calls on Russia to immediately halt military action in Ukraine and increase support for Kiev, “including supplies of lethal materials,” declaring its readiness to help Ukrainians rebuild their country.

Boris Johnson said at the signing ceremony in Helsinki: “The Russian invasion of Ukraine changed the European security equation, rewrote our reality and changed our future. We saw the end of the Cold War era, but the invasion of Ukraine unfortunately opened a new chapter.”

He added that the defense pact shows that Britain and Finland can “intensify their partnership and take it to unprecedented heights”.

The agreement is a political declaration, rather than a legally binding document under international law, the Finnish President’s Office said.

Sweden and Finland started talking about the possibility of giving up years of neutrality and joining NATO against the backdrop of the Russian special operation in Ukraine. NATO Secretary-General Jens Stoltenberg supported the idea and promised to ensure both countries’ quick accession. Julianne Smith, the U.S. permanent representative to NATO, said the organization expects Stockholm and Helsinki to make independent decisions on joining the military bloc in the coming months. According to her, the United States would welcome such a step.

The Kremlin called Sweden’s and Finland’s joining NATO an existential threat to the country. Dmitry Medvedev, deputy chairman of the Russia’s Security Council, said it was necessary to be prepared for aggressive actions of the bloc against the background of attempts to expand its presence near Russia’s borders. It is expected that Stockholm and Helsinki might decide whether to join the NATO bloc by the end of May.

It’s actually an interesting development, almost like Poland’s arrangement in WW2. In one way it can be tempting for Russia as putting the whole British fleet underwater with hypersonics must be a temptation. Indeed the UK needs its fleet more than Russia, so even a symetrical reaction, if it occurred would still be a win for Russia. Indeed a Russian strategy that clips global reach of adversaries, while leveraging its world spanning geography, could be a winning strategy. In any case the British would likely engage in a repeat phoney war, repeating its cowardice in the second world war, waiting for others to enter and do the real fighting.

Wall Street and the Bolshevik Revolution by Antony Sutton (1987) https://worldtruthvideos.website/watch/wall-street-and-the-bolshevik-revolution-by-antony-sutton-1987-discussion-cover-photo-petrograd-revo_ailSSe3sEpCoP7H.html

Yes, in a documenty an Australian soldier being interviewed said ” we had trouble advancing, because of the retreating English troops.

Dude, Russia is getting its ass kicked by the Ukrainians .. UKRAINIANS ! And you think Russia would have a chance against the UK. Bwhahahahahah!

Remember it was all brown trousers time when the French exocets humiliated the Royal Navy in the Falkland’s. The demolition of its whole fleet with hypersonics (unstoppable) would effectively leave the UK an ireland – no spelling mistake – a powerless lump of rock in terms of global reach! They would be hitching rides with the yanks – as usual! The English bar would become like it’s sister ireland, the only sign of global reach!

The Last U-Boat Attack 1982 https://www.youtube.com/watch?v=VKUxwB8gi0c “The story of the German-built Argentine U-boat San Luis and her daring attacks on the British fleet during the 1982 Falklands War.”

It certainly is. Meanwhile ROW cannot remember the result of the Falklands War.

And you think UK would have a chance against Russia? Just wait you guys calm down things have changed hhhhh

British and American firms constructed the armament and automotive factories in the Soviet Union, while the USA provided substantial materials and everything else you can think of to throw the Wehrmacht back to Berlin. https://youtu.be/5qkmO7tm8AU

I think you maybe omitted purposefully or accidentally the building up and support of Nazi Germany by the US. You seem to have done the same regarding omitting the Munich pact where Britain allied with the Nazis to attack and dismember Czechoslovakia. I will leave you to your other omission’s and Myths concerning WW2 which the Soviet Union would have won regardless of US and UK help. The only difference would be the Soviet union would have stretched to the west coast of France and the med. You should lay off just reciting western propaganda and trying to pass it off as commentary!

“Western propaganda” Yet Russian politicians repeated “western” propaganda with claims about Hitler being financed by Wall Street, or that he was jewish.

Your melodramatic screeching is best reserved for your therapist. If you were correct about anything you say, you could refute me. The fact you can’t refute me is a solid indication you need to brush up on your homework, buddy.

A staggering forty percent of the historic record about the German eastern front remained shrouded in mystery. Col. (Ret) David Glantz seeks to unearth this information and dispel myths that have perpetuated the Soviet-German War of 1941-1945. This conflict encompassed immense scale, scope and consequence. The cultural and ideological conflict surrounding the German-Soviet clash presented something never witnessed before by an American Army.

Although Anthony C. Sutton ignores the Jews, while proving incorrect about NS Germany being on internationalist payrolls; he nails the sheer magnitude of Western assistance to the Soviet Union before and during WWII. Even after the war the Israelis continued to leak technology to the Soviet Union that kept making hefty loans from Western banking institutions and continued to exchange their technologies in trade.

Had the Americans sided with the Third Reich or stayed out of the conflict, the USSR would not have been capable of driving back the Wehrmacht. I also suggest you stop playing armchair general and figure out that war is not some retarded video game.

Good, they will go all the three (England + Finland and Sweden) at once. Sorry, but with such leaders no one ruled by them will survive.

As a finn I can agree. People of Finland would like to keep our dear country neutral. It is political party leaders and EU/WEF puppet government making the Nato decision. Not finns.

Nato is our national suicide.

NATO is a defence alliance. It is not a threat.

I thank Putin for turning FI population around to want to become part of NATO.

Those sons of a bitch already wanted to go to the nato’s crematory. Your problem, little stupid, is that not even Pakistan will joint you, imbeciles. As sooner you realize you are cretinos de merda, more chances for your sons.

The anglo-saxon devil said: USA and their vassals are not going to eat all the world. But they are already barking for an all planet little Nato, those stupid sons of a germanic bitch!

It was not part of their blood, It came to them very late, With long arrears to make good, When the Saxon began to hate.

They were not easily moved, They were icy — willing to wait Till every count should be proved, Ere the Saxon began to hate.

Their voices were even and low. Their eyes were level and straight. There was neither sign nor show When the Saxon began to hate.

It was not preached to the crowd. It was not taught by the state. No man spoke it aloud When the Saxon began to hate.

It was not suddenly bred. It will not swiftly abate. Through the chilled years ahead, When Time shall count from the date That the Saxon began to hate.

I suppose you are ignorant off the jewish control over the West and Russia? As well as South America and nearly every other place to varying degrees.

I advise you to cultivate more your poetic side, on a duet, suffering and hate, because you are going to suffer, as you will not forget.

This looks like the first move towards the creation of the new Norden Islamic Aliance.

Since mighty mini Churchill has signed mutual security pacts with Sweden and Finland, whats the need for them to join NATO.

Russian military fiasco in Ukraine. Diplomatic losses heavy. Putin’s blunders are gigantic. No wonder why he is now public joke. Russia is now the swamp.

Biden kaput, say the polls. Shlomos, this it’s serious, you are really menaced.

The British military would be stretched to the limit if they were to provide military on the ground as it were to Finland Norway Poland Germany and where ever else. This is politics the British military are way too small in numbers ships and aircraft to make any sort of difference to the fighting ability of any of the above nations. Singapore 1940s the British army surrendered 200.000 troops to the Japanese without a shot being fired. Again arnam bridge another disaster and so on. Hong Kong lost to the Japanese also the fall of Hong Kong. Dunkirk a disaster and still they never learn their lesson

Bobo, for your cares, is a good name. Did you read Hop-Frog ?

who, will do the fighting? Finland gets Karelia, Poland gets western Ukraine and Britain trades weapons for bodies. occupied Germany pays the bill. they are underestimating Russia and think to tear off pieces

Shlomos, get wise, this world is very dangerous for you, your anglosaxon goodfather is going down.

Bojo thinks he’s churchill, although he will have to increase his drinking if he is to compete. Churchill lost Blighty its empire. What will the people of Blighty lose next under the tenure of this drunken clown?

The mind boggles as bojo is highly corruptible and irresponsible. It’s the breeding. Just look at all the other freaks that were in his year at Eton.

Pact with Britain is worthless and always has been.

Many banks in Finland have freezed the bank accounts of Russian citizens even if they have also Finnish passports, tells Alexandra in Finland. She had to manage with two children and her firm account was also closed for a while. Is this harrasment or what? Does the bank steal the money of Russians even they have got them with good work and paid their taxes? https://www.youtube.com/watch?v=YYPkp4fZe6M