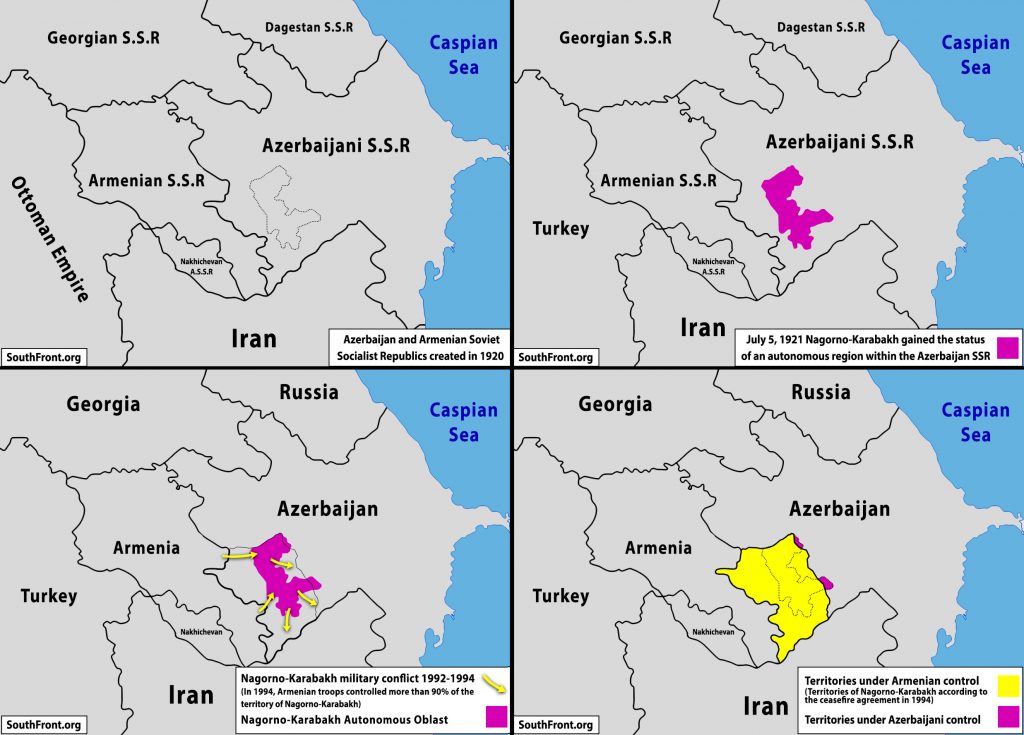 Nagorno – Karabakh is an administrative territorial entity located in the Transcaucasus between Azerbaijan and Armenia. It is a self-proclaimed Republic that is not recognized by any UN member state. The only formal recognition of Nagorno-Karabakh independence comes from three other self-proclaimed countries – Abkhazia, South Ossetia, and Transnistria.

The administrative center is Stepanakert (Khankendi in Azerbaijani).

In February 2017, the Nagorno-Karabakh Republic officially changed name to “Republic of Artsakh”.

Since 1921, the region was part of the Azerbaijan Soviet Socialist Republic as an administrative territorial unit with the rights of broad autonomy. In 1923, it received the status of an Autonomous region (NKAO) within the Azerbaijan SSR.

In 1987, 75 000 signatures of Nagorno-Karabakh citizens for reunification with Armenia were sent to the Central Committee of the Communist Party of the Soviet Union. It provoked a negative reaction from Azerbaijani authorities. The next year the regional Council of the NKAO asked the Supreme Soviet to consider transferring the region to Armenia, but this request was seen as a manifestation of nationalism. In four months, the regional Council made one more attempt and declared its secession from Azerbaijan. In response, the Presidium of the USSR Supreme Soviet adopted a resolution denying the possibility of transfer.

After the attempts at peaceful transition failed, since September 1988, armed clashes began between Armenians and Azerbaijanis, which turned into a protracted conflict.

On September 2, 1991, the region was proclaimed to be the Nagorno-Karabakh Republic (NKR) as part of the USSR. It included the territories of the NKAO, Shaumyan district, and part of the Khanlar district of Azerbaijan.

This marked the beginning of an open armed confrontation between Armenia and Azerbaijan for control of the region in 1991-1994. The Karabakh conflict was the first major armed confrontation on the territory of the former Soviet Union. After to the collapse of the USSR, Soviet internal troops were withdrawn from the region. The situation in the conflict zone went out of control.

The fighting escalated in may 1992, when the self-defense units of Karabakh took control over the city of Shusha, from which Azerbaijani troops regularly bombarded Stepanakert and surrounding villages.

Armenian forces broke the Azerbaijani blockade in the area of Lachin, establishing communication between Karabakh and Armenia (“Lachin corridor”). Azerbaijani troops established control over the Northern part of the NKR. In the spring of 1993, Karabakh forces, with the support of Armenia, created a second corridor linking the NKR with the Republic.

In 1994, the NKR defense forces established control over the 90% of the former NKAO territory and also occupied fully or partially seven border regions of Azerbaijan (8% of the territory of Azerbaijan). In turn, Azerbaijan retained control over parts of the Martuni, Martakert and Shahumyan districts of the NKR. According to various estimates, the losses of the Azerbaijani side during the conflict ranged from 4 to 11 thousand killed, and the Armenian side from 5 to 6 thousand people.

On May 5, 1994, a ceasefire agreement, known as the Bishkek Protocol, was signed by the parties with the mediation of Russia and Kyrgyzstan. The document entered into force on May 12, 1994.

Since the signing of the Bishkek Protocol in 1994, the parties have repeatedly accused each other of violating the ceasefire, and there have been numerous local incidents involving the use of firearms on the border.

The situation in the Nagorno-Karabakh conflict zone escalated sharply in 2014 and 2016, but the region has not faced armed conflicts like today’s war since 1994.

In Video: 10 People Killed Due To Gas Leak In Aqaba Port, Jordan

This is about correct. We see the clear aggression on Armenian side. They not only control N-K, but took other Azeri territory. They are just like Israel. And the rest of the world stood there and did nothing to stop it. Russia even somehow supported the aggression.

It is time to stop. Take back N-K to its rightful owner.

Refugees can return home. Armenians are welcome to stay.

Yes. And give back Hatay to Syria.

What about the previous 3000 years?

The problem started again with Stalin.He gave Karabakh area to Azeri communists. He game them Lachin too and NAchicevan. Armenians were ethnically cleansed from Nachichevan (50%) and Lachin areas(minority, majority Kurdish settlers who mostly settled in the area in the 19th century), but the establishment of the Autonomous Oblast of Nagirno Karabakh , with self rule and Armenian leadership(to the extend that things could be self-governed in USSR), sheltered the Armenian population there. Removing any military means from the Azeris, and controlling the police forces from Soviets, prevented any more skirmishes until 1987. Russians have a moral and historical obligation to undo what USSR created and protect the native Armenian population from another historical injustices.

True, however Armenia must realise that you can’t have your cake and eat it, they can’t play both sides any more. Russia would be crazy to spend their treasure before Armenia renounces their pro-Empire rhetoric. Fixing historical mistakes is one thing but creating new ones is another.

It doesn’t have to spend any treasure.It’s on Russia’s best interest (Iran’s too) to keep the status quo.Not only keep it but expand it. There is a tiny land bridge that connects central asia to the west. It can be closed in a day and ensure the interest of Russia in central Asia. Iran interests are even greater than that. It will secure all of its northern borders and eliminate any possibility of secessionism in its northern provinces. Even more, eliminate the possibility of Azerbaijan to become a base for aggression against Iran.

Russia will not lift a finger to protect Armenia, it neither has the capability or the will to get involved in a losing conflict. Armenian misplaced arrogance sealed its fate. It is hard to see Armenia survive as even a mini state.

Armenia’s capital city Yerevan was founded before the city of Rome, and Armenians were known to be the deadliest enemies of the Roman empire. What were your ancestors doing back then, do you even know who they were? So please don’t tell me what you think about Armenia’s future.

Mr. Erdogan has just been on TRT wearing an Azerbaijan flag on his lapel and proclaiming that “InshaAllah Karabakh will be liberated soon”. I believe it is all over for Armenia.

The map intentionally uses misleading words, those territories are not merely “controlled” by Armenia, they are OCCUPIED by Armenia. If it is “historical” armenian land, why do you think in 30 year neither Russia nor even Armenia ITSELF hasn’t recognized it as an independent state. The reason is simple. The so called “Nagorno-Karabakh Republic” is an illegal entity, and is internationally recognized as the territory of Azerbaijan Republic. Hence neither Armenia nor Russia don’t want to be involved in recognition of an illegal political entity. Armenia has a far a long history of fabricating historical “facts”. In the 1990’s they have perpetrated genocide on the Azeris of the Karabakh region, which is well documented by international observers as war crimes, but armenians always blaim the victim. This is their tactic. I am in Ganja city, and Armenia is shelling it with rockets as I am writing this. My windows are shaking of the blast waves. Who is the agressor now? Wake up world!!!

That’s not a brief history of NK. That’s a brief distortion of history by the South front. Nagorno Karabakh was the are of a historic Armenian kingdom going back more than 2500 years ago. In the Middle ages Armenia came under the control of Persians , of whom it reamians until the 19th century. NK was rulled by the known five melikdoms , the armenian feudal semi-states that excerside power for the Shah. After a small period under a breakway Iranina state on the caucasus, it was incorporated in the Russian empire. WW1 and the Bolshevic revoloution saw the the recreation of the Armenian state, which united the Ottoman and the Russian part of Armenia into the First Armenian Republic which was recognized at the treaty of Serves, INCLUDING NK. 2 years after the establishment, the soviet army came to its gates, along with Azeris islamo-communists. The Armenian leadership exhausted from 10 years of war, singed the power over. In spite the agreements and the soviet proclamations for selfdertimination , Stalin handed over the Armenian provinces of Lachin, Nachichevan and NAgorno Karabakh to Azeris, and north Armenia to Georgia. Armenia had already lost the West Armenia, which the Turks again ethnically cleansed. Armenian from both Lachin and Nachichevan were ethnic cleansed( half the population), where as the in Nagorno Karabakh an autonomous oblast was created under the nominal control of ASSR. In 1987 as the Soviet rule was collapsing, Azeris once again started ethnically cleansing Armenians. 300 000 Armenians were expelled from Azerbaijan after bloody pogroms. Except Nagorno karabach, where Armenias were in control. Armenians there armed themselves using the Soviet deposit, and reppeled the Azeri attemp to establish control over the region. In the 7 year war that followed Armenians manage to keep their own from the continuous Azeri attacks but also open road ways to Armenia incorporating the Lachin Are into NK. The shiite Kurds who were living in the regions chose to leave, inspite the short live attempt to create a kurdish Zone with in Armenia.