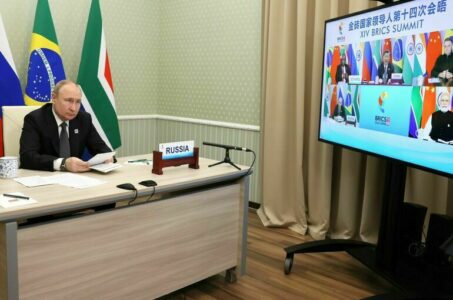 Purnima Anand, president of the BRICS international forum, said on July 14 that Turkey, Saudi Arabia, and Egypt are considering joining BRICS. The possibility of countries joining, as well as their potential admission to the ranks of the BRICS, could take place in 2023 when the next summit of the group will be held. The countries themselves have expressed a desire to join the union, but if approved, the application process will be lengthy.

South Africa will host the next summit in 2023, where the member countries will make the final decision.

In addition to the aforementioned countries, Iran and Argentina want to join the group. They have already submitted their applications.

From June 23-24, Russia, China and India discussed the issue in an online format. The talks took place on the sidelines of the 14th summit of the BRICS leaders which was also attended by 13 observer countries. Just after the summit, Argentina and Iran applied to the group. Argentina said that together the organization represents 42% of the world’s population and 24% of GDP, while Iran expressed the position that the new members would only bring mutual benefits.

With the accession of new members, the total GDP of the countries will amount to more than $ 27 trillion, which is currently the sum of the GDP of only four members.

The accession process will be heterogeneous, some countries will join a little faster than others, for example, Turkey is the closest to joining BRICS, although at the moment the Turks are experiencing serious economic difficulties.

There are no criteria for accession, so the timing of the accession of new members is unclear.

The main criteria is the country’s leadership in the region and in its integration group, but the formats of leadership are not defined, we can only assume that these are political and economic factors. According to the preferable scenario, the BRICS plans are to include every leader country from each region.

Purnima Anand commented on the expansion of the BRICS: “There is a chance that the union can work to create a new world order: increase resource sharing, develop air, trade and financial routes for the new global realities.”

Russia noted that it wants to see all the countries that have applied for membership in the organization. Russia sees the potential of new member countries. Turkey is an active player on the world stage, while Egypt founded the New Development Bank. Moreover, Turkey wanted to join the BRICS back in 2018, but then the countries found only the BRICS+ format acceptable, although now they have a more flexible approach to the issue.

Lula and the BRICS in Fight to the Death

The multipolar world is forming, the west has lost its power, and everyone knows it. It was a clever Russia China tag. Russia went in Militarily to secure its security. The west couldn’t answer directly (Russia has Nukes), so the west made the mistake of engaging in economic war and ruined their economics, whilst China stood firm. That simple one, two – one military, two economic (of their own making) has turned the world upside down with poles being enhanced. Brics expansion is just part of this natural process. True globalism can only come back as savvy countries straddle both sides, executing options in each and grow to understand the world must be one of equality in terms of international law. Bombing Yugoslavia, creating Kosovo was the start of all this – A new equal world order will be the end with the US as just another country whose success will be determined not by might is right and owning the rule book, but by winning in an equal world – their mafia world will have been broken!

ALASKA IS RUSSIAN NOT BIDENS
Reply to  RealityOfWar

Anglia
Reply to  ALASKA IS RUSSIAN NOT BIDENS

Anonymous
Reply to  ALASKA IS RUSSIAN NOT BIDENS

NATO's PROXYTUTE
Reply to  ALASKA IS RUSSIAN NOT BIDENS

Once BRICS grew up to more than 50% of world countries as members, they should form an association similar to UN located on a neutral grounds where each member is treated as equal and provided an opportunity to raise, discuss, and resolve issues of concerns in a way acceptable to everyone.

I’ll believe it when “Ankara” stops killing Russian diplomats and military in Syria and sending it’s mercs to “stir the pot” in Ukraine!… Without question Turkey and Saudi Arabia are the Anglo-Zi0ni$t compartment that will stab the Russian government in the back any chance they get when they both don’t get what they want!… And the Russian Federation knows it!

The sale of SA-400s to Turkey the most boneheaded deal with the deaths of Russian military in Syria as the backdrop being by the far the biggest and worst contradiction.

Your talking as if you think it’s a dream come true. It’s not . Why do people think anything anti American must be good ?There’s no reliable reason to think that .

Russia has never asked for the demise of the US, just the reversal of the current situation where everything must be for the US – every rule, every decision. But Russia has now got the west in a ruinous entanglement. An entanglement driven by the desire for the demise of Russia. Russia has engaged in a measured fashion militarily. The west has engaged in disproportionate economic warfare that is destroying itself. The west could try to go the military escalation route with its economic warfare approach in tatters. However, Russia can scale what you see thirty times militarily – it is dimensioned to take on NATO – US is really far away in terms of logistics, and hypersonics make dreams of returning from sorties to a home base for a nice meal a thing of the past. Russia simply asked diplomatically for an agreement for a neutral Ukraine, the Minsk agreements to be followed to save lives and NATO roll back to 1997 (to get back to honesty instead of NATO lies of none expansion). All these were simple diplomatic requests. As they say, if diplomacy fails, war is the next step. The west really faces a choice. Stop trying to work for the demise of Russia, or carry on with the ruinous entanglement. An entanglement which will see eastern Europe immersed into war, NATO broken and Europe plunged into economic bleakness. The ball is in the west’s court – is the ATTEMPTED demise of Russia worth the destruction of the west. For only an Attempt it would be! As the demise of Russia is fully linked with the TOTAL destruction of the west. Remember China is just around the corner. It’s time for the west to wake up and smell the coffee, a coffee brand Obama was drinking when he said Russia will always have escalatory dominance in Ukraine – the reality of that is before your eyes, as you watch over Biden failures induced by UK warmongering, based on nothing else but jealousy and military incompetence – as they say now in the UK – who dares kills those unarmed in detention!

The dismantling of the evil empire and its minions is underway and soon will reset the corrupted system we long endured under the Western spells into a new dawn of genuine democracy and freedom.

Let me know when the Russian Federation will be announcing it’s official departure from the Ca$in0 at 405 East 42nd Street, New York, NY, 10017, USA. And setting up the new transitional HQ in Moscow.

The men and women of the Russian Federation have earned it these last 8 years starting with Andrei Karlov and Vitaly Churkin RIP.

Countries interested to join BRICS are motivated to loosen the tight choke hold around their pnecks applied by the west, Once admitted, these new members can use the club as a leverage to address matters of concern on their perspectives knowing that buddies will be around to lend a helping hand.

S. A; is rotchild controlled, egypt is also zio controlled, Turky is zio and us controlled. Do not let jews into the BRICS !!!

Every country is ran by them, expect a few. If you search that country up on google and all you see is fake news, it’s 99% against the Zionist

Although BRICS helps sanctioned countries like Russia, and hopefully soon Iran and NK, all these countries are Zionist pets. Russia can only truly trust Iran and NK. Iran and NK are the two most anti Zionist countries, these are the type of countries you need to have military agreements with, not Turkey or Egypt

That’s naive Iran is totally set up by the CIA .They killed the Shah with cancer and set up the Ayatollah .

“amerikans live in a thicket of illusions…” Daniel Boorstin

That’s most of the world covered. Do you think that the planned for NWO has got the message? It seems most of the free world wants the Swab and his devotees to, eat ze bugs.

The rest of us will carry on as normal, but hopefully without their crippling extortion and racketeering.

As long as the people believe anything they see on main stream media, they’ll follow whatever their politicians say

“if you can get people too believe absurdities you can get them to commit atrocities”. Voltaire

Didn’t you read the article ?Brics said straight out that they intend to be the New World Order.

That’s odd, because pappa bush was talking of his NWO back in the seventies. Obviously Russia and China, and a few others, were never meant to join that NWO as equals to the US.

So the phrase was coined in the west, some time ago, and not the east.

This is what you call rats leaving the sinking ship. And that ship is the political West. The brilliant people in the room know that within 100 years, the political West, the United States, and its allies will no longer be in charge of world affairs. Instead, it will be a Consortium made up of the brics Nations, the Shanghai cooperation organization and India. Thus, you have a bunch of up-and-coming powers, Egypt, turkey, Iran, Saudi Arabia, Argentina and others wanting to get in on the ground floor of the organizations that will be governing world affairs well into the 22nd century.

Anonymous
Reply to  duke of lilywhite

The new world order And most of them are really Crown Law from England really or under Spanish influence and or the Vatican .It’s them covering both sides .The crown’s if England Spain under the King of kings if The King of the Holy See and the most powerful Autocrat in earth ,the Pope.

We don’t want a new world order serving elitist corporations regardless of what front they project. Russia does not look after the poor ,nor does South America or South Africa or India or China .

This is huge on so many fronts. North and South Fronts. I had to I just had to.

This expedites the collapse of the petrodollar since Saudi Arabia is soon going to join BRICS. Iran, Argentina and now these three large countries joining BRICS is huge. If NATO countries like Turkey are joining BRICS then you know its over.

BRICS is a trade and development alliance distinct from NATO an imperialist USA creation; NATO/EU represents 20% of the world economy—self suicide is deserved….popping popcorn

AM Hants
Reply to  Yuri

NATO/EU.G7 – make up 20% of world economy and 80% World Debt. The other nations, make up 80% world population and 20% world debt. Funny, how NATO/EU/G7 cannot comprehend just how insignificant they are, in the multi-polar world.