Beijing is preparing a free trade agreement with the countries of the Persian Gulf, and with Iran plans to increase trade to $ 600 billion a year, linking up with the states required for the new Silk Road 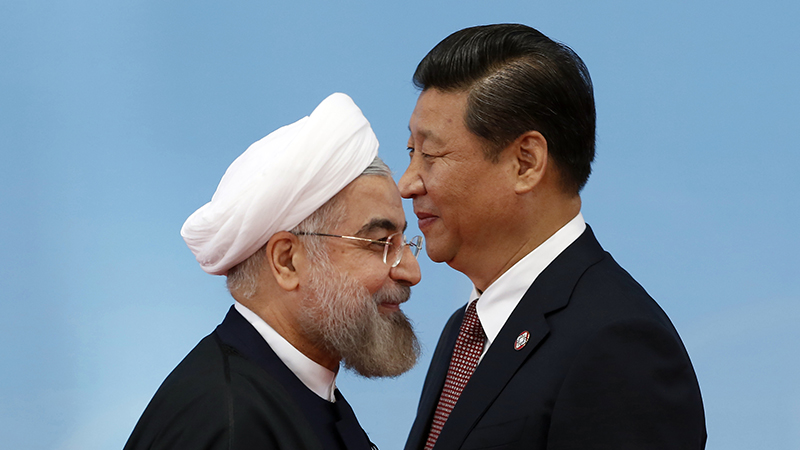 Written by Vladimir Vukasović; Originally appeared at Politika, translated by A. Đurić exclusively for SouthFront

Last year by signing of free trade agreements with 11 Pacific countries, America, in economic terms, has implemented something like the famous strategy of “containment” of the military expansion of the Soviet Union during the Cold War. Only this time the aim was to restrict the economic expansion of China, which, in principle, is allowed it to join the Pacific pact, but its standards of liberalized markets and protecting of the rights of workers and the environment, essentially prevent China from joining. Washington has thus managed to slow down China in strengthening economic ties with the natural partners that it would have in the neighboring countries. But Beijing is preparing to, both by economic and thus political means, make breakthrough to the ground, where the US has so far been untouchable in military and political influence: the Middle East.

A free trade agreement between China and the six Persian Gulf states- Saudi Arabia, the United Arab Emirates, Bahrain, Qatar, Kuwait and Oman – should be signed by the end of the year, it was announced during the visit of Chinese President Xi Jinping in Riyadh. Xi Jinping did not forget the most powerful country on the other side of the Gulf, Iran, where they agreed that trade between Beijing and Tehran in the next decade it to increased more than tenfold, to $ 600 billion a year. Outside of bay, but on the Suez Canal, a very important transport corridor for Chinese goods, Egypt is not bypassed on Xi Jinping Middle East tour. In Cairo he signed a memorandum on cooperation regarding the Chinese New Silk Road, intercontinental infrastructure chain for shipping Chinese products to foreign markets.

„China is preparing to, both by economic and thus political means, make breakthrough to the ground, where the US has so far been untouchable in military and political influence. Where America is sending troops, China sends industrialists“

Beijing in the past year has concluded, almost hurriedly, a series of agreements on free trade, opening himself markets of Australia and various South American and Asian countries. Although slowed down, the second most powerful economy in the world still has an enviable growth rates. On the list of countries with which it wants to sign free trade agreement is another one from the Middle East – Israel.

China already has considerable trade with the Persian Gulf countries and from the region receives more than half the energy. It is estimated that in 20 years China is to import more oil than United States, and they are becoming more independent because they finally produce enough “black gold” to have it for export. In this context countries of the Gulf rely less on the United States, and they are also visibly dissatisfied because Washington, so far their staunch ally, is now showing lower readiness for military intervention in the region. Partly US military withdrawal opens space for China to make economic breakthrough and , side by side with intensified diplomatic efforts on Syria and attempts to mediate between Riyadh and Tehran, strengthen its political influence in the Middle East: indeed, it is likely it will be considerably more difficult than in the weak countries of Africa, in which China has invested a lot, and is ready to add another 60 billion dollars in the next three years.

On that continent Beijing opens its first military base abroad, in Djibouti, whose shores face the water which carries a huge part of the global transport of oil and where the Chinese ships carrying goods for export to the Suez Canal. China makes increasingly vocal calls for international cooperation in the fight against the Islamic State, which is firmly entrenched in the Middle East and has presence in Africa, and has recently passed a law that allows Chinese army to engaged against terrorists abroad. But China is unlikely to use this in order to expand its influence on foreign topicality. US military interventions failed to beat global jihadism, which is why Washington is currently in a bad mood to continue this policy in the Middle East. Where the United States sent troops China, in turn, sends industrialists.

Such an approach rather than power politics has already made the points for Beijing in the country, which at this time is one of the main economic target for business people around the world: Iran. Ever since last June became clear that Tehran will sign an agreement on the limitation of its nuclear capacity, and that in return international sanctions will be lifted, the world’s business people haunt the Iranian capital, trying to take the best possible starting position for an “assault” on a market of 80 million people and one of the world’s largest oil producers, which, thanks to the annulment of the embargo in the foreseeable future should become available in greater quantities than double the previous year. In that race, China has an advantage because, although China has not opposed these sanctions in the United Nations, it never left the Iranian market. On the contrary, China made benefit from the absence of once great players, like Germany, to enter into large-scale projects, such as, for example, was the construction of the metro in Tehran. A way was found to circumvent the blockade of Iran’s banking system, and according to “New York Times”, the formation of the new bank, and barter arrangements.

Thus the Chinese have garnered praise from Iranian Supreme Ayatollah Ali Khamenei, who pledges to cooperate with such an “independent country” and to strengthen mutual economic, and security ties. Iran is not only a source of 10 to 15 percent of oil which China uses, but also link of the new Silk Road. Therefore, during Xi’s visit to Tehran they signed 17 documents on cooperation in various fields of energy, industry and transport to tourism and the environment.

Familiarity with Iran is not a recommendation in the eyes of Saudi Arabia and others from Sunni bloc from the Persian Gulf, but that, obviously, does not stop the Chinese economic breakthrough into this part of the region. Somewhat Beijing “redeemed” to them by supporting the government of Yemen, which is along the planes of Riyadh and its allies infantry fighting Shiite militia rebellion, which is suspected to have the help of Iran. China’s support for the Yemeni government was only in words, so Tehran was not offended by this balancing, which is, after all, the positions of the standard policy of Beijing. This policy was emphasized in the strategy paper on policy towards the Arab countries, which China composed regarding the region: according to him, their common stance is “consensus on preservation of state sovereignty and territorial integrity, defending national dignity …”. Using these principles, China has consistently refused the justification of military interventions, which seems to be successfully replaced by Chinese economic “landing”. In the name of these principles China avoids criticism of the Egyptian regime, to which, regarding cooperation on the new Silk Road, promised financial assistance of $ 1.7 billion at a time when regime is under fire from civil unrest and complaints from the West about the arrest of political opponents.

“Trade with ALL, Alliances with NONE” Thomas Jefferson We are far past the point We should have told Israel to go PIZZ up a rope.