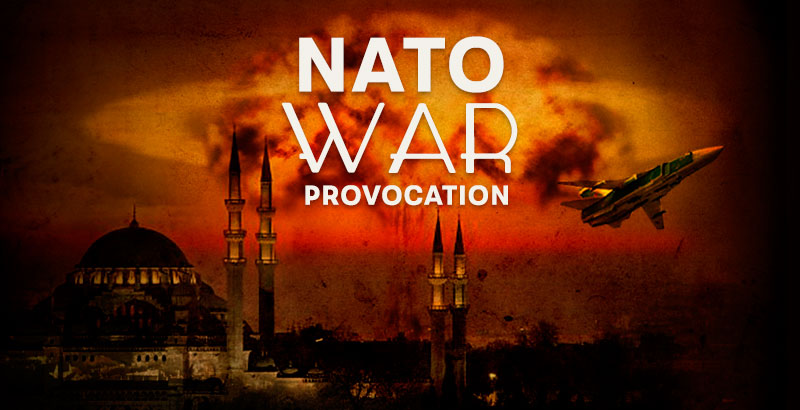 A Russian SU-24 frontline bomber has been shot down by the Turkish military near the Turkish border. The Turkish officials claim that the plane had violated the country’s airspace and was warned before being shot down. The pilots have ejected from the plane but there is no further information about them. The Russian Ministry of Defense came out with a statement that the plane was strictly within the Syrian airspace, in altitude of about 6,000 meters from the border.

The plane has most likely been shot from the ground.

On the other hand, the Turkish military claimed two F-16s on patrol had fired on an unidentified aircraft at 09:24 (07:24 GMT) after warning it 10 times over five minutes about violating Turkish airspace over the town of Yayladagi, in Hatay province. But pilots did not transmit any warnings or info on F-16 patrol to Russian air control.

A spokesman for a rebel group operating in the area, the 10th Brigade of the Coast, told the Associated Press that the jet’s crew had tried to parachute into government-held territory, but that they came under fire from members of the group. One of them was dead when he landed on the ground, he added. The fate of the second was not immediately known.

Turkey’s President, Recep Tayyip Erdogan, is to chair a security summit later on Tuesday following the downing of the Russian fighter jet.

It will be attended by armed forces and intelligence chiefs.

Are numerous Russian air and rocket strikes expected at Tuesday night in northern Latakia near the Turkish border in response of SU-24 shooting down?

Will Russia answer by targeting the Turkish air defence?

Update 22:00.  1-st pilot was retrieved dead, 2-nd pilot was killed after captivity, One mariner was shot dead during rescue operation. 1 SU-24 and 1 MI-8 were lost today.

Update 16:00. It’s clear that  SU-24 frontline bomber has been shot down by two Turkish F-16s. SU-24 was attacked insidiously and unexpectedly.

Update 15:50. Tomorrow meeting between foreign ministers of Russia and Turkey is canceled.

Update 15:45. Turkmen brigade deputy commander Alpaslan Celik tells Reuters: “Both of the pilots were retrieved dead. Our comrades opened fire into the air and they died in the air.”

Update 14:40. At least 1 Russian pilot captured after being shot down by Turkey

Update 14:30. Millitary experts: from all appearances  SU-24 has been shot down by Turkish medium-range surface-to-air missile of MIM-23 Hawk, not MIM-104 Patriot under US crew, that now out-of-service in Turkey. (Not approved)

Turkey is an American (Israeli) lapdog. None of those countries could be trusted. People of the world will be happy to see Turkey and Israeli terrorist states to be wiped off the earth by Russia.

Saw a report on the main dutch news channel, not because of the info, but because i wanted to know how the media was going to bring this, as i find it a good indicator of western european policy. The news didnt showed turkey in the best of light! And the anchorman said that the erdogan was being dangerous. They also broadcasted the many allah hakbars of the rebels.

all i can say is that russians actions in syria are just. Crazy Erdogan, he thinks he is a sultan that can do as he pleases, but little does he know that before Turkey is accepted into the E.U., it must be broken first, so the elites can excert full control. The kurds will break away for sure, and after this fiasco i can see the russians supporting them in the future.