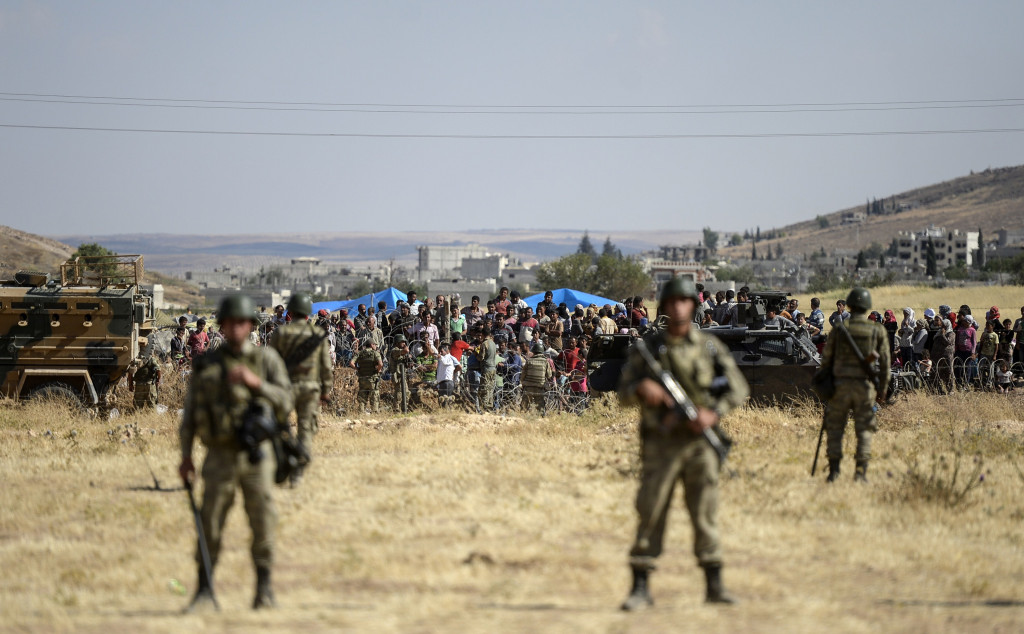 He added that the plan will require approval from the Syrian government and close cooperation with the United Nations.

Lavrov said the American proposal to create secure areas for refugees within Syria was put forward in the context of migrant flows to the neighboring countries, the Middle East, as well as Europe, and “at the end of the day, the US.”

“If this is about the people who were forced to leave their homes by the conflict, […] getting their basic needs covered, […] then I think that the idea to create areas within Syria for those internally displaced could be discussed with the UN’s High Commissioner for Refugees and other organizations,” he said.

The announcement followed the call between Russian President Vladimir Putin and his US counterpart which took place last weekend.

Last week, US President Donald Trump ordered the Pentagon and State Department to develop a plan of creating a series of “safe zones” for refugees fleeing violence in the war-torn country.

Trump asked the King of Saudi Arabia to support safe zones in Syria and Yemen and he agreed, the White House says pic.twitter.com/L5C9gwamww

It’s not a good idea because could give terrorists a chance to hide in such zones .

Imagine Saudis funding AL Nustra from a side and from the other caring about such safe zones what a joke . NO Safe Zones .

yep but there’s much difference between imagining and that actually happening. Saudi Arabia will never be allowed to get into Syria officially.

It’s a moronic plan. I didn’t expect any better from Russia. They are big prostitutes. It seems like sanctions are hurting Putin’s oligarchs badly.

at least you don’t seem to know anything about prostitutes.

Being one, you seem to know a lot about your colleagues.

lolololol. i’m not the one getting paid for sucking soros dick.

lololol, Is that what you mutter when you have it inside?

You just can’t believe the role KSA has been playing in all this mess. It seem like they are capable of bribing the whole world.

What Salman has to do with the sovereign state of Syria. He is the main culprit in destabilizing Syria. Why would any sane person seek his opinion on Syrian refugee crises? Why does he need to agree?

When i was writing here for the dirty role of Lavrov and the Putin weakness, some blind Taliban -putinistas insult me and writing that i am CIA agent.

Well Lavrov and Putin have sent Milosevic to the kangaroo court in Hague doing Clinton and US elite a favor.

Putin said that Milosevic was problem from Russia too. Moscow voted absent in the UN for the no fly zone in Libya. Putin withdrew after West ultimatum, the Russian troops from the Ukraine borders, and gave the green light to the Kiev Junta to genocide the Russians in Donbass, and now came in Syria to betray the Syrian people.

Somebody could have only wished it was otherwise.

I admired Putin for Crimea, after that he was retreating and showed weakness every -were some naive here called that Chess movement and long time policy.He used the Russian of Donbass in order the West to accept the Crimea repatriation, he promised to them independence and after abandoning them, I understood that he is an opportunist.

Russia abstained in an arms embargo to Saudi Arabia.

Do you see Saudi Arabia and Turkye give weapons to terrorist,Turkey killed Russian pilot and ambassador Russian abstain from arms embargo.Like now Syrian army is getting upper hand on 06 February 2017 Russia will call or accept immediate cease fire and then the Terrorist will take over.

Lavrov and Putin are both kangaroo traitors.Just before the Syrian get the total upper hand their call in cease fire.Both behave like Political prostitutes every USA administration and Nato fools them.

but you are one.

Glad you admit you are a rat meat burger eater.

Don’t worry about him. Don’t you see that he comes from Disneyland?

That wasn’t me for sure, because I agree with you and the other guy, Putin sold out the Donbass at Debaltsevo by halting the advance , even before NAF was set to liberate Mariupol after the first encirclement defeat of the ukrops, and Putin called it off, HAIL STALIN, a man with balls.

All what you said is correct but no more Stalins please. Russia has only 120 mil people left. Read Alexander Solzhenitsyn and you will understand why that would be a bad idea,

With what Syrian opposition talking in the Astana Lavrov?Now the Jabhat al-Nusra became moderate terrorists. Lavrov the dinosaur ,the former Yeltsin s minister .

While SAA is winning on the battlefield Lavrov has made Syria and Iran losers at negotiating table by promoting terrorists to the role of diplomats. It seems like Russia is using Iran as a bargaining chip for lifting economic sanctions.

You have to deal w/ Saudi Arabia somehow to stop this war.

If Syrian Gov can live with this safe zone & confirm terrorists are not organizing.. this could be a solution

Or safe zones for Americans in their country who lost heir jobs and cannot pay their mortgages, or health care bills?

we thought obama gave access to healthcare to everybody. wat a disappointment.

The sheer arrogance of Trump trying to show concern for Syrians while he banned them from entry to the U.S.

Wherever the heroic Syrian Arab Army is, IS the ‘safe zone’. Bashar, don’t budge, and fall into the trap.

Sometimes you have to be pragmatic. Assad and Lavrov can argue that Jarabulus is the ‘safe zone’ for refugees that don’t want to live in govt areas since that is already under Turkish control and they are herding the bad Jihadis to Idlib.

This would tie down the Turks to administer it so that they wouldn’t be able to go on offensives against the Kurds. This could also force the Gulf States to fork over cash to care for said population and free Assad to eventually move against Idlib with the argument that civilians can go to Jarabulus and give the Turks the headache of sorting out who’s, who. It has already been established that Al Nusra is too stubborn to give up their strongholds so they will fight to the death at Idlib. They won’t want to give up Sunni territory.

right, all the jihadists and fundamentalists currently in Syria should be loaded into buses and dumped in Turkey, and bombed to dust if they try to set a foot over the border again. Also Europe should ban entry from Turkey without special visas or the like, so that that garbage does not leave the calyphate. Regretfully there ain’t no Trump in Euroland.

Could not agree more, the only real safe zones are the government-controlled areas, the only right approach to build a safe zone in Syria is to defeat jihadis, and give humanitarian aid to the people, like Russia is doing,

I guess that the proper reply of the Syrian government should be an enthusiastic “yes”, provided that the territory of the Syrian Arab Republic is extended up to and including the Arabian Peninsula and the Persian Gulf. :-P

Fine, but ONLY IF DAMASCUS agrees, the safe area is taken from ISIS control and put under JOINT Russian, Syrian government, Turkish, and US control.

The minister was right. He said ” if Assad agrees ” . But Assad won’t agree.

He covered his ass OK. But just talking to the Empire is pussy.

Safe zones trump wants means creating an area for refugees to go to so they won’t go to other countries.

They are not communicating.

Trump does not want to shoot down Russian or Syrian planes. The refugees are fleeing from terror militias, and do not want to go to a “safe” zone occupied by them.

In the end, a safe zone will have to be occupied by western forces to keep it clear of terrorists before refugees will come back to syria.

The saudis are not getting anything that they wanted from such safe zones. Nor is it clear trump will actually follow thru with any deployments for building safe zones.

if safe zones will accomplish preventing syrians to leave the country and go to Europe, and not defending jihadists, they would be a welcomed feat. I believe they could be adequately defended and policed, it would be an easy task. In addition, many idiots would not be able to use the argument that Assad “bombs his own people” anymore.

Since when Syrians are “defending jihadis”, you ogt it all wrong, it will not be an easy nor cheap task to invade Syria, Russia and Iran are there, still watching what Jew-controlled Trump is going to do to wreak havoc.

you should read again and get who got it all wrong

This discussion is nonsense. Trump’s safe zones are no less invasive than Hillary’s or Saudi’s. Trump just wants to make Israel great again, because the Anglo-Zionist Empire lost influence in the Middle East, so ZIo-controlled Trump wants to use the military to rebuild the Empire. That idea already failed once, and is doomed to failure again.

Surely Syria, and Russia wont fall for this? If they allow the USA, and Saudi Arabia to become involved these safe zones will just be terrorist R&R centers. Then, when Syria, and Russia are forced to reclaim the territory it will be a huge propaganda victory for the forces of evil. “SYRIA OVERRUNS SAFE ZONE” “RUSSIA BOMBS REFUGEES”, ad nauseam.

The only straightforward goals should be set for Saudi Arabia and allies.Take out all the weapons deports of Saudi Arabia and friends and the war will stop.Start supporting Yemenis and Turkey and Saudis will retreat.As long as Turkey remains in Syria war will not end.

That bloody Erdogans body guards have also killed the ambassador.Putin and Lavrov ceasefire is always on the expense of Syrians soldiers death and then the opposite happen.Their playing game with enemies even the oil and gas defence containers that their bring in Syria does not detect missiles.After the incident you only hear that the warn the enemy aircraft to stop attacking Syrian soldiers.

Lavrov “Our next sellout is feasible again.“Now is clear why nobody trust Putin -Lavrov and why Iranians kicked of Russians from the Hamadan Air Base .In Donbass every N A F leader who was against the Minsk high treason truce is dead.I hope not happen the same to Assad.

Syria has to clear the CIA out of all of Syria for it to be safe.

Well said, only the Syrian government and army, have the right and the duty to protect their homeland.

Note the measured words of Lavrov, because he knows the Syrian government will never agree to these so-called “safe zones”, which it rightfully sees as an invasion of the country. Even more absurd is the agreement with Saudi, on safe zones in Yemen, as if it were not precisely Suadi bombing Yemen, you want safe zones? Stop bombing!

This is an absurd idea. Saudis already have a save zone for “non-residents” in Idlib province. :p

:D seems that in these latest days it aint very safe anymore ..

Previously NATO/GCC wanted safe zones to really mean sovereign Syrian territory that Syrian military – ie SyAF actively and forcibly prevented from accessing by aggressive military intervention. The term safe zone was also previously ambiguous at best, as the safe territory was largely intended for safety of militants, to relocate their operational bases, shifting them out of southern Turkey and into Syria proper. Russians certainly not going to allow that older model to occur, as would mean ever-protracted conflict. So presumably there is shift in US position under Trump – perhaps his advisors not simply using safe zones as euphemism for protected militant bases inside Syria – and may actually mean refugee zones…?

How many countries have been destroyed using the safety zone approach ? This time it could be difference if Russia can handle this approach.