US President Donald Trump and the Russian Foreign Ministry have simultaneously accused US media of publication of the fake news. 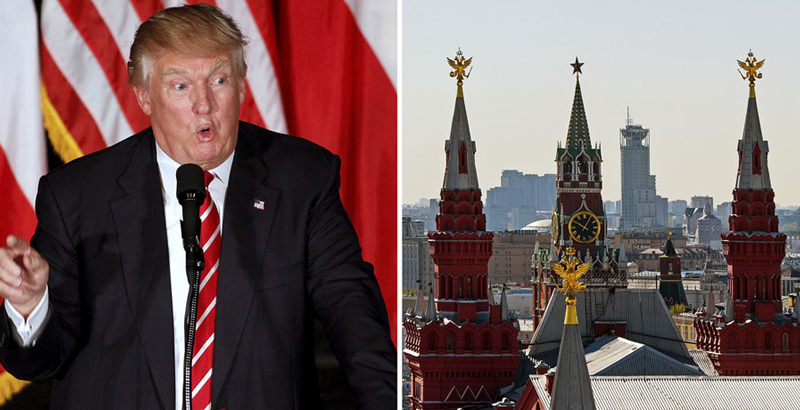 On Wednesday, US President Donald Trump has once again slammed “fake news media,” after a number of them, such as the New York Times, the Washington Post and CNN, reported that Trump’s advisors allegedly communicated with members of the Russian intelligence a year before the presidential elections in the US. At the same time, the Russian Foreign Ministry has also accused US media of creating fake news. Maybe, next time, CNN will tell us about coordinated efforts of Trump and the Kremlin to discredit US media? This development seems enough possible in the current situation.

In his first tweet, posted on Wednesday, Trump criticized MSNBC and CNN, however, at the same time, he noted that Fox News’s ‘Fox & Friends’ is “great!”

The fake news media is going crazy with their conspiracy theories and blind hatred. @MSNBC & @CNN are unwatchable. @foxandfriends is great!

In his next Wednesday’s tweet Trump also said “this Russian connection non-sense is merely an attempt to cover-up the many mistakes made in Hillary Clinton’s losing campaign.”

This Russian connection non-sense is merely an attempt to cover-up the many mistakes made in Hillary Clinton’s losing campaign.

The US President also blasted the continued “illegal leaks”, saying it was “just like Russia.”

Information is being illegally given to the failing @nytimes & @washingtonpost by the intelligence community (NSA and FBI?).Just like Russia

At the same time, official representative of the Russian Foreign Ministry, Maria Zakharova, said that instead of fighting against fake news, in many cases US media themselves are authors of such news.

“One example: as you know, recently, US media reported, citing its sources, that Russian special services, the Russian side, have allegedly expressed its readiness to extradite a former employee of the NSA, Snowden, as a gift to the US President. This is not the first time, when US media publish these citations on some unnamed sources. And we have already given our comments on them,” Zakharova said at a briefing.

She emphasized that in all these cases nobody addressed to the Russian side for confirmation or refutation of this information before its publication.

Zakharova also responded to criticism from British media in regard to the Sputnik news agency. According to her, it was a coordinated action. Zakharova said that several leading British newspapers simultaneously accused Sputnik of publication of false information.

“[They] branded Sputnik with all possible colorful epithets, such as ‘the Kremlin’s Soviet-style misinformation machine’,” spokeswoman for the Russian Foreign Ministry gave an example.

According to Zakharova, people, who organize and implement such actions, “do not really understand that it is clear,” as well as “people, involved in information technology and information,” keep a close watch and see “traces of how an information campaign has been launched.”

Flynn didn’t give up, he took it for the team, it is too early to be desperate, instead of freaking out get people should rally around MSM buildings and George Soros and protest, just like libtards do.

Maybe this will rally Thrump supporters and People who are sick of twisted liberal ideas to come into action and organize counter protests. Infact this is already happening southfront is Living proof of that.

I have no idea as to all that is taking place. Very few do. That said, there are some clues. Today or yesterday, it was stated that the President knew about this for two weeks. Okay, maybe he knew about it longer.

So what were they doing with the time? Well Flynn was out one day and another candidate appears the next. It happened like lightning. Also, President Trump fired right back at the press and the intelligence agencies. Remember, nobody said a word on the Trump team for weeks. Now changes are coming very fast and team Trump is swinging hard and will probably go for a scalp over this.

This is hardly the behavior of a group in disarray. They waited, decided how to handle it. They probably tracked down where the leak came from and have formulated a reaction. If one has an opponent who is thoroughly professional, they do make mistakes; to err is human. But, for crying out loud, you cannot give a group loaded with professionals, two weeks to do something at their leisure.

In my opinion, it is Trumps’s turn and boy watch what happens next. Have a good evening Anonymous.

Agreed. THE TRUMP TEAM KNEW THEY WERE UNDER SURVEILLANCE. This is a trap – and the neocons stepped right in it. They just haven’t felt the trap spring shut yet.

Exactly trid2bnrml. I was raised in the mindset and methodology, of many of President Trumps´ advisors and supporters of professional caliber. It is not something that the left liberal/progressive affiliated want running in a pack; which they are now. This group assembled by the President, is the same type that put the kibosh on the Progressives in the earlier part of the 20th century. They have now gathered en masse.

The Progressives of late and those known as Neo Conservatives, have not had to engage these folks. It is going to be like an alien attack. A time will arrive, when they will not know if it is night or day. The media is going to become very entertaining. It has only just started for them.

Flynn, Pierce and a host of others are patriots, American patriots. They have fought and bled on the battlefields, they have sacrificed and dedicated themselves over and over again. They are the real deal. About 30 years ago, they fell almost completely off the radar. This is why NeoCons were ´allowed´ to grow in strength. By nature, Neo´s and Progressives are scrimpy. Why the Trump types disappeared, is a story for another time.

In my opinion, the pussy hat people, Soros types, NeoCons, Deep State types, et al, really need to behave now or they are going to get wiped. Look what happened to Senator Schumer. He was shredded in a single instant. He was supposed to be one of those leading the fight against Trump. After his tear jerking was confronted, he has disappeared. The same goes for the Hollywood bunch. They have shot their load and are now dismissed.

I don´t think that the situation with Flynn was created on purpose. It just happened. The difference between crew Trump and the second stringers going after him, is that they used the time available to be prepared for a counter attack, before the downfall.

´Deep State´ people and the rest, do not operate in the realm of logic. They live in a world of image projection. Their rubber never really meets the road. They are the ones in serious political danger. The voting map is telling it all at this point. It has been a long time coming. I wish well to you trid2bnrml.

flynn took one for the team

Yeah, he was simply “repurposed.” Now he has a different set of tasks, without the surveillance. Don’t count him out yet.

Trump will be impeached soon. In Florida he calls south korean prime minister from open reataurant, everybody could hear him. So, this guy is sick and will be shot or sent in the hell.

So how many tables near him were his body guards , and who would even have a clue who he was talking to ? And I’m sure they were not talking “top secret” spy stuff , I think he’s normal , trying to get one more thing done on a busy day . The people who are sick , are those trying to stop his “peace with Russia” foreign policy .

Your questions are irrelevent. Today everybody can hear using phones as microphone. This was big, big mistake. What do you think, which politics want to talk with him, when hear about this affere???

Again, shut up hillary. You’d better get packed. They’ll be coming for you soon.