Late on June 28th, the Russian missiles hit targets on the outskirts of the city of Kharkov. As a result of the strikes, fires broke out in the facilities that are uet to be identified.

Russian missiles hit the AFU positions in the Kharkov region on a regular basis. On June 27th, more than 100 soldiers of the Armed Forces of Ukraine, foreign mercenaries and up to 15 pieces of equipment were destroyed by strikes of the Russian Aerospace Forces at the location of the Nazi formation “Azov” in Kharkov, the Russian Defense Ministry reported. 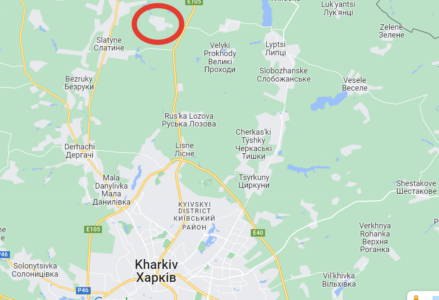 Fierce clashes continue on the front lines in the Kharkov region. According to preliminary reports on June 28th, the battle for the town of Dementievka in the north of Kharkov ended with Russian victory. Russian-led forces continue the mop up operation in the settlement.

Nice display of Ukrop stuff blowing up. Guess they got some polski “volunteers” too

Turns out theburned bodies shown before on SF were indeed those of foreign mercenaries. Russians have found poorly burned bodies around Lysychansk and Severodonetsk that belong to British and Polish mercenaries. Obviously the AFU got the orders from Kiev who got their orders from the west to leave no evidence behind.

US has been killing million of innocent peoples in The Middle east lol.

Always thought so as the raw footage featured an LPR or Chechen soldier showing a partially burnt US Passport Card he pulled out of the rubble. Maybe the Nazi types literally executed the mercs when things went south, rather than just burning a few of the foreigners KIA.

That’s definitely possible and in the ukro nature. Probably “suicided” them to the back of the head first.

Work AT Home
Reply to  Leland

Last edited 7 months ago by Work AT Home
-9
Reply

War
Reply to  Work AT Home

US has been killing million of innocent peoples in The middle east lol.

Even the New York Times had to NOW admit:

As the New York Times reports, such problems are “highly costly” for the Armed Forces of Ukraine.

🔹Unit commanders have to communicate with fighters through “messengers”

Deliveries through NATO do not cover the needs of the Armed Forces of Ukraine in basic things, and Ukraine itself is unlikely to be able to do this.

When the Russians eventually break through the last of the Donbas defenses, they are gonna really roll.

🇺🇲🇷🇺 The Biden administration believes the Kremlin took a “cynical step” when it imposed sanctions on the Biden family. 🤣

🇷🇺🇺🇦 Explosions are reported in Odessa and Krivoy Rog. Ukrainian sources say that there were arrivals in the area of ​​the Kryvyi Rih TPP.

!!Kaboom!! Girl 1: My God, oh my god, Holly crap. Guy:-Slow down. Girl 1: Lena calm down this is not on us. Lena: Cries. Well something like this. (like 99,9% of the population of Kharkov, they were speaking in Russian language, not even with Ukrainian accent)

Lena was the one, the girl was talking to on the phone

Oh Ok. It was a bit confusing. Lets hope Lena is alive and well, and that the Azovists are already in Valhalla meeting Odin.

No, they’re in Gehenna as Jesus promised for those who commit evil works.

Azovists can only meet Bandera in hell for pigs.

Thanks Max and ZVO!!!

How cool would it be if that bridge that just opened up that connects Russia and China is used for China to transport 1.3 million soldiers into Ukraine and Russia and China take over all of Europe then China takes another 1.3 million of its soldiers and takes taiwan, Japan and demilitarizes South Korea. Now would be the time to do it and you know the U.S. currently would not do a dam thing about it. Europe has no oil and almost no tanks left so they won’t be able to even put up a fight. Gotta strike while the iron is hot, might as well. Although I’m joking it would be funny as hell and let’s be honest if right now Russia, Belarus, China, Iran and North Korea wanted to they could easily take over. Who is going to stop them? The globo-homo NATO woke military? They’re too busy painting rainbows on their useless, overpriced F35 fighter jets that are so heavy that the engines blow up in mid air lol.

You are absolutely right, it would end this nightmare hellhole of a clown world we live in for good

Take your med. then go to bed.

A MESSAGE TO AZOV IN KHARKIV

Being a NAZI isn’t as much fun as it use to be. Now you have a target on your back. Especially if you are part of the military and you hang out in packs like Azov groupings.

In case you haven’t figured it out, Russian are very good hunters and they don’t like your kind. THEY GET OFF TURNING YOU INTO WORM FOOD. Follow the worms.

Only good nazi is a dead nazi

Wipe them all out! No mercy!

I am equal to all degeranerates; only Russians, Indians, Jews, Chines and pygmys are superior to us exceptional lgbt amerikunts

everything in its time. Russia will give the NAZI-NATO allies a big surprise if they decide that Poland will be the next willing sacrifice. sentiment in the USA is turning against Bidens war. no one but a bunch of pasty-faced Gamers headquartered in the basement of their mother’s house is in favor of it. MAGA