Earlier today, reports appeared that government troops entered the town and were clashing with ISIS inside it.

If Uqayribat is really liberated, it will be a major blow to ISIS terrorists inside the eastern Hama pocket and the entire pocket will likely collapse soon. 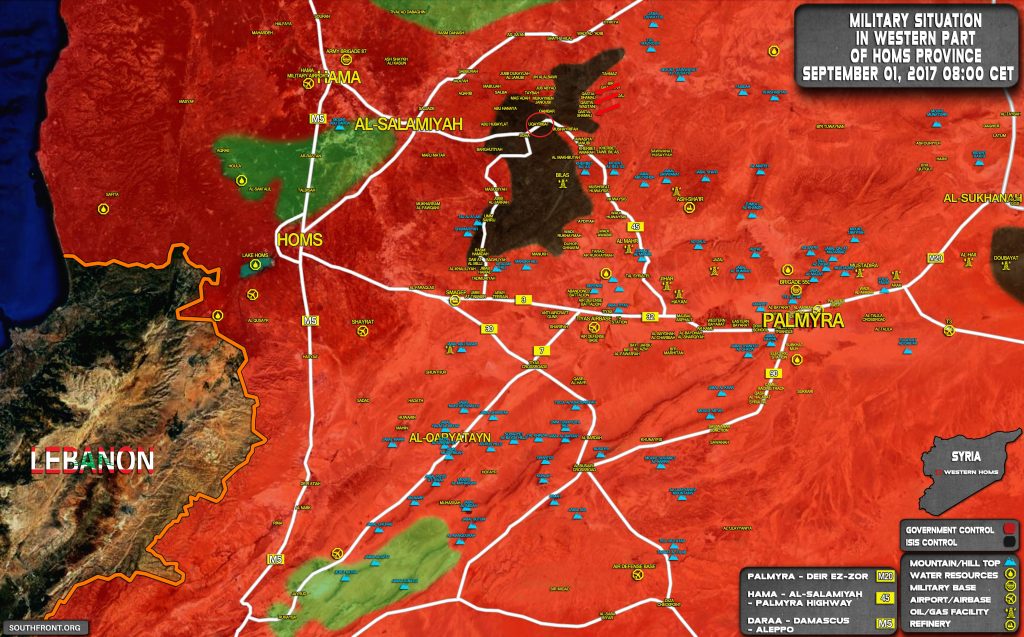 Hope the SAA by 2018 reforms their whole army towards a more modern aproach with a combination of others such as main forces being trained like the Russians and reserves or conscripts following the older , guerrilla methods but also a bit of the Russian model

The Army reformations you are talking about are as old as Europe itself and have always been used and never really adopted in the US very well. The Current Model the Russians have been adopting has been employed by Canada for decades which is suited for smaller formations and tactics, they have completed there formations a few years ago.

They found these formations beat the superior forces and guerilla tactics in war games for decades and employed it in war zones effectively, throughout the world currently.

Yes, right now there are hundreds of syrians trained by russian and chinnees, soldiers, commands, generals, and especialist in modern weapons.

Fest action and take advantage of momentum and initiative makes fast and easy successes. This is how should be

You were opposed to diverting troops from the Madan front to the central Syrian front to create these pockets. Now you claim this is the way to do it! Another fraud like Woolpuller!

i opposed too. of ourese, maadan is 100x nore important. but we are happy also from little succsesses of syrian army.

One more important step in ridding Syria of barbarians. Congratulations to SAA, allies and the Syria people. Perfect gift for Eid! The good wishes of the entire civilized world are with you!

Eid like AIDS … :P I still cant get how people could come up with islam … but I suppose its the culture overthere. If they have no malicious intent like the immigrant cowards who are reliant on violence, then I cant really say they be bad guys.

Nothing wrong with devout celebrating. Islam still is nothing but an insane invention of a lunatic guy – muslims basically are his victims.

Eid like Aid or even in German and French E as A same sound ,very easy to understand the similarities , but not for some who are linguistic poor and always hear rednecks speaking.

waooh, such a great blessing for Syria!

As I predicted right on time. I am right again!

This might seem like a stupid question, but what’s going on in the de-escalation zones right now? KiraSeer

Waiting for the doom-day approaching-))

I can’t remember, but how long were those de-escalation zones to be de-escalated? I’ll look it up, I guess. KiraSeer

Don’t even waste your time! There are no any margins. Our russian “military police” is the only one. Amd the reputation threat for the “piece”-breaker. Zones are very different being associated with different patrons. I guess the first ones which are going to be eventually “deescalated” (denusrated) are Jobar, Terma and Hama-Homs pocket.

Having trouble with your English, Dim. Are you saying the time line of the de-escalation zones is open-ended?

Why that?) No time lines, no deadlines, no terms, no temporal margins – whatever you prefer-) Actually, there are no zones’ boundaries as well. And there can be no ones. No even negotiations are going to be held. Because everybody presumes Syria’s individibility, and what place can Alcaida challenge for when the war ends? Most of them are not even syrians…

Perhaps there is/was more deception in the formation of the de-escalation zones than was made public. The U.S. obviously hasn’t observed them.

Well, Trump and Tillerson obviously hate to support Alcaida and wage war on Assad. Erdogan surrendered, horrified by “kurdish spring”. That’s why the agreement on the zones is undoubtedly real: otherwise Putin would never put our forces next to Israel and in Afrin. But for the real power-holders in the USA and The West in general, Assad is a way worse than Hitler (actually their role-model), and war in Syria and the whole Middle East must go on and on and on. And up…

Well, I didn’t care for the de-escalation zones myself, but not for the reasons you state. (I’m having a hard time figuring out your reasons nonetheless).

However, it will be in the best interests of all combatants to know the U.S. isn’t always honorable in its actions.

In Idlib we can see that Al-Qaeda (HTS) is trying to seize control, as the real opposition (local opposition against the government) mostly does not listen to HTSs foreign mercenary demands. One of the reasons of the infightings.

It’s a complex situation, barely anyone will be familiar enough with, to give us a clear picture. There are many different agreements, which are kept or not, depending on the interests in the background. HTS already helped Daesh (IS) to open the pocket around Uqayribat, officially only for civilians to escape SAA forces. But, latest since 9/11, we know that real events and official events are two different stories.

u r most welcome

Shows they also know time is short and Daesh near Euphrates are pushing that time table forward, so instead of clearing the countryside first they clear the city and then kill the rats out in the open.

That was quick! Excellent job SAA.