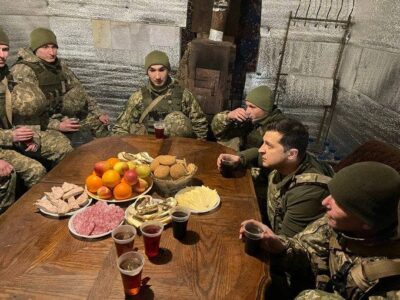 The failure of the information campaign aimed at provoking an armed conflict in Eastern Ukraine on February 15-16 did not bring the Ukrainian regime and its patrons to their senses.

Since the night of February 16, the shelling of the DPR and LPR by the UAF has sharply intensified. By the afternoon of February 17, the frequency of the attacks reached the intensity of 2014-2015.

Today, the UAF artillery carried out 18 massive attacks on the territory of the Donetsk People’s Republic (DPR). For example, during one of these attacks on the village of Shakhty Izotov, 16 mines were fired from an 82mm mortar launchers. In total, about 300 rounds of heavy artillery and mortars were fired.

For example, in the Luhansk People’s Republic (LPR), the following attacks were recorded in just one hour:

On the night of February 18, the shelling intensified. This night may become a decisive one.

According to some recent reports, a complete evacuation from the village of Alexandrovka near Donetsk has been announced. All the civilians were ordered to leave the village.

On the night of February 18, fighting continued on almost all front lines: Donetsk, Gorlovka, Debaltseve-Svetlodarsk, Pervomaiskaoe, Western part of the Bakhmutka highway.

Tanks and heavy artillery of the UAF began theirs attempts to break through the defense positions near the village of Nikolaevka.

At about 1 a.m local time, the mobile network was cut off in some of the front regions under the UAF control.

The OSCE has recorded numerous shellings by the UAF along the front lines. The UN Deputy Secretary General said that the current escalation is the largest since 2014.

The Western MSM continue to escalate the situation by publishing paint-styled maps showing the ways of the Russian invasion of the territory of Ukraine.

Everything may seem logical. The situation on the front lines has significantly escalated, Russia replied that it was not satisfied with the U.S. response to the proposal of the security guarantees in Europe. But the ground facts are that all attacks on civilian objects on February 17 were carried out by the Armed Forces of Ukraine.

In its turn, on the morning of February 17, Kiev published fake videos and photos that allegedly showed a shell fired by the LPR militants hit a kindergarten in Stanytsia Luhanska. 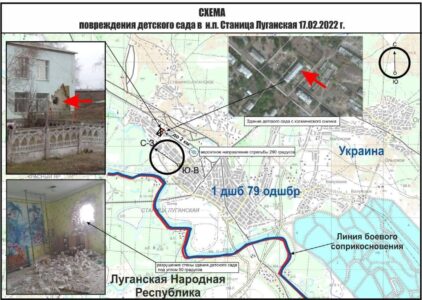 A few hours later, these statements were exposed by objective geo-analysis, which made it possible to calculate the trajectory of the projectile and revealed that the shot was carried out from the territory under the Kiev control, particularly from the deployment site of the UAF 79th brigade. It is also suspicious that the windows were not broken.

On the afternoon of February 17, the LPR announced the arrival of Western journalists to the Kiev-controlled part of Donbass to provide “informational support for the UAF offensive operation”. According to the same scheme that the West tried to apply in 2008 in Georgia, foreign journalists in the Donbass region have the task of covering the Ukrainian offensive on the territory of the republics in the “right” way.

Foreign reporters in the kindergarten: 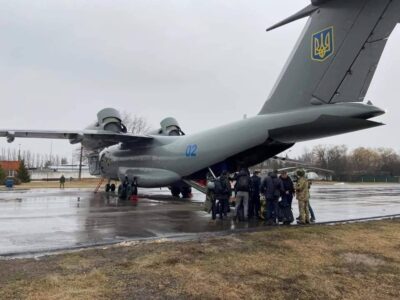 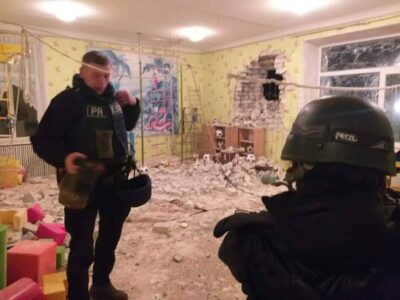 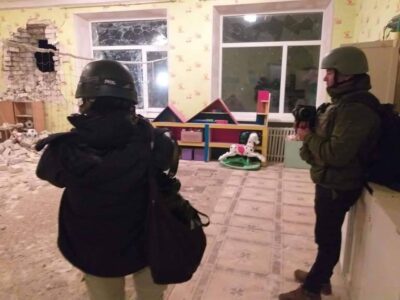 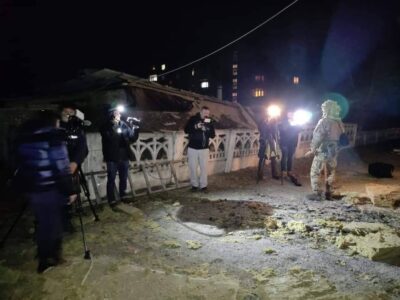 At the same time, a significant part of the Russian military forces that conducted military exercises in the Russia’s Western regions returned to their permanent location in other Russian regions, including Siberia and the Far East.

Apparently, it was the withdrawal of part of the Russian troops from the West of the country, including Crimea, that triggered the aggressive actions of the Kiev regime.

Kiev considered that Russia had demonstrated weakness in the face of the United States and its allies, and now there is a unique chance to solve several Ukrainian problems at once by military methods. At the same time, it does not matter whether the military fortune will be on the Kiev’s side during the battles in the East of the country.

At the cost of thousands of lives of Ukrainians, both citizens of Ukraine and residents of the DPR/LPR, the Kiev regime is trying to keep the U.S. front going, receive new multibillion-dollar financial support from the United States and NATO countries, kill as many civilians in the DPR/LPR as possible and divert the attention of its own citizens and military personnel from the catastrophic socio-economic situation in the country.

It doesn’t matter what the end result is. In any case, the MSM propaganda machine will show the picture that the Kiev regime and their overseas patrons need.

The bonus for Zelensky will be that, by sacrificing his country, he will ensure the guaranteed death of the most passionate serviceman of the Ukrainian army, who could well turn their bayonets against him. A significant part of the motivated UAF servicemen who are currently deployed in the East of the country consists of nationalist extremists from the Western regions. In Ukrainian domestic political solitaire, they are the ones who pose a dangerous threat to Zelensky’s rule.

Unfortunately, the Ukrainian war is inevitable, the last questions are the date and the consequences for Europe.

To hell with the zios they will lose surely

Time to nuke USSA, UK, EU, Israhell, nuke em all. Seriously, people are dead everywhere as long as Anglozionists Empire exists, got sick and tired of all those things.

They are Jews, not Anglos. Russia & China love Israel too, Zionism & Bolshevism in all its colors go hand-in-hand.

Jews played a critical role in the founding of the Communist Party of China, and the subsequent creation and management of the People’s Republic of China: https://jewishcontributions.com/infotables/infotable-communist-china/

There it is, the fiends accuse Russia of wanting to invade so that they themselves can invade Donbass! If Putin allows this genocide to happen then he should either hang himself or be hanged! NO MORE PLAYING GAMES, RUSSIA MUST DEFEND IT’S PEOPLE OR BE DAMNED FOR ALL TIMES!

Exactly as expected/planned by Washington DC, Maidanterrorists just follow/obey their orders. The only question is will Putin allow Donetsk to fall. If he doesn’t then USNATO will have their “Russian invasion!!!”

It is not Russia that is facing some tough decisions. It is Ukraine. Will they start a war they cannot win? Will they in fact commit genocide as they are told to? The Ukrainian regime has lost already. They are pawns in a geopolitical play. Russia is aware who is behind all this. The EU seems to be ready too, to create a conflict. They just had to postpone it, because they fear Russia will cut off their gas supplies as a retaliation to the sanctions the EU will put in place. This would be disastrous during the ongoing cold season. They are also a bunch of pawns or they are paid a lot to betray their countries. We will see.

Well, now we know. Russia stepped up and recognized the independence status of the breakaway regions. Now Russia has a legal basis to fuck Ukraine up, if they go further with their fascist agenda. All in accordance with international law. And we all know how nice Ukrainian army behaves in regards to Crimea :-) They talk a lot but don’t do anything.

A nuke on Kiev would solve all problems.

Mass murder solves a lot of problems, this is true!

Sadly there is no captcha for dimwits like this one. And people in here thought the ad-bots were annoying already.

Still, it does not solve all problems because bad actors will be fragmented and will begin plotting more ways to destroy china and russia.

Russia does tend to put up with quite a lot before it retaliates and probably they would not retaliate until the Western media was openly acknowledging a Ukrainian offensive and praising it, then they would step in and defeat it.

Russia made it clear many times, it will not be the one that will start a war. There is a reason why the Ukrainian forces don’t do any attacks on Crimea. They know too well it is Russian territory. So all they do is attack the breakaway regions. They tried this already in the past and failed badly. It won’t be different this time too. Russia will support those regions, but will not send in troops. They do it like they did it last time. They give them hardware and supplies if they have to. The units there are well trained and capable to defend themselves. A warning not to commit any sorts of genocide on minorities was issued by Russia too. Ukraine regime will not likely dismiss such warnings. They know too well they are no match for Russia. They have not that much support for a new conflict/war among their citizens. They are still aware of what happened a few years ago. They lost around 50’000 to 60’000 servicemen. People don’t trust the regime and their publications.

It took Russia a while before launching momentous 16 Kalibrs on ISIS in 2015. War in Ukro 404 already happening since 2014…so it is about damn time, it is near of momentum. So things gonna happen from Russia side.

In hindsight, Zelensky’s date was proven correct so far. 😂 We should all buy full tank of gas tomorrow.

After the first war on the Don Bass there followed a fragile peace. During this period no less than 3 leaders of the Don Bass militia were assassinated: Motorola, Givy and Zhakarchenko. No one has ever found out who the assassins were. Makes you wonder.

At least they were given death as martyrs not as Nazi terrorist. Even their death doesn’t significantly lower or change the moral of the DPR army. In fact, they were having excellent reason now, every reason now, to avenge every single death cause by UkroNazis since 2014. Death to all UkroZioNazis!

It seams the west’s goal was to demonize Russia’s intervention while they facilitate massacre the people in DPR and LPR.

Off course nobody are shelling back at the UAF forces. The DPR and Russia are victims just crying “now they killed our children again and they did it again to our kindergartens”. After 8 years of shelling and killing we cant do anything about it because we are also Europeans like you are. We have you in our hearts and want to be like you and be equal partners muahhh muahhh muahhh.

No one is crying. Ukraine is the only looser in this whole staged conflict. They are just too dumb to see that or very well paid to keep their mouth shut and do what they were told. They failed last time, they will fail this time too. They must bee all on drugs thinking this time it will be different. US can play checkers all day long, if they want too. Russia still playing chess.

It is Ukraine vs Donetsk now .I noticed $1.2 billion is going into the Ukrainian steel industry while as long as the energy crisis persists EU industry will be weakened.