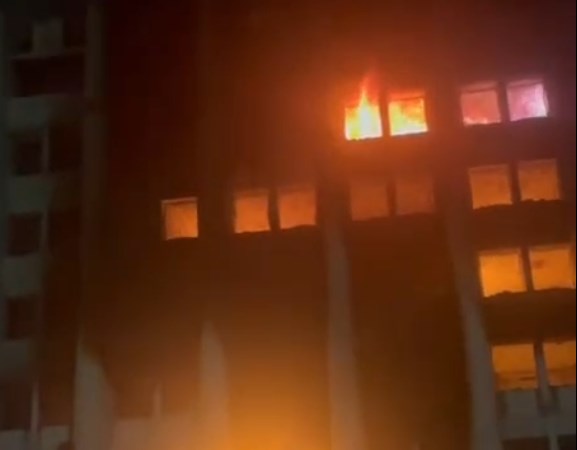 According to the leader of Kazakhstan, militant gangs have been seizing infrastructure buildings, premises with small arms and are fighting with cadets of military schools. He noted that the civilian airport and 5 planes, including foreign ones, were briefly seized by gangs in Almaty.

Tokayev emphasized that intense clashes between militants and Kazakh security forces were ongoing near Almaty.

President Tokayev described the ongoing developments as a foreign aggression against Kazakhstan.

Meanwhile, reports appear that 45th Regiment of the Russian Airborne Forces stationed in Kubinka (Odintsovsky District of Moscow Oblast) was put on alert. According to Russian media, this very regiment may be deployed as a part of the CSTO force to repel the aggression against the country.

Government offices are burning in Almaty:

Center of the city:

Earlier, Tokayev held phone calls with Russian and Belarus President regarding the situation in the country to discuss the developing situation.

Vice mayor of the city said that the anti-terrorist operation has been kicked off in the city and its countryside. The local airport was reportedly freed from gangs.

‘Protesters’ seize weapons in the gun room of the national security committee facility in Almaty:

Nonetheless, recent actions of the Kazakh leadership and its decision to request the CSTO assistance demonstrate that Kazakhstan and its allies will contribute every possible effort to repel the ongoing foreign-sponsored terrorist aggression against the country.

One nuke tipped hypersonic cruise missiles on Langley would put an end to these terrorist invasions.

Hmmm…. It seems to be USA as usually

Clemens Först (@ClemensFoerst) Tweeted: Proud to be part of shaping the future of rail freight between Europe and Asia! Together – as three strong partners #RailCargoGroup, #CERCargoHoldingSE and #RZD, and with support from politics – we will make rail transport on the New Silk Road even more attractive. @rzd_official https://t.co/mJ4SCBoXRm https://twitter.com/ClemensFoerst/status/1471039394102583298?s=20

Rail freight is not in the interest of the US. They’re a sea power. This is why they stire up trouble on the Horn of Africa, Yemen, other sea lanes. No, Först says: Despite trying to interrupt Eurosian cooperation, they will not succeed.

Not clear whats going on here, too early to take sides. Even if its NED sponsored, its globalists vs. globalists. No pity to the government, that profits from a resource rich country but does not subsidize its own people. Heard they also have the strictest coof measures in the CIS… people have had enough anyway.

PS: Delete the spammers SF, not me ffs.

The neede changes in Kasakstand for years hardly has been there. By that its stupidity to raise the price for gas.

If You want to, which might make sense, You have to do it a little by a little or compensate it or parts of it.

The glass became more then full. And shooting at those demonstraters and even asking for Russian help tells, which should be replaced.

Well, I wonder who that might be. The fuel subsidies reduction plan was poorly executed giving the usual suspects plausible deniability. I guess KSOR will be dealing with this.

I see no foreign agression. Those new prices are decided in Kasakstan. No one else do like that in the whole world with no demonstrating. I would.

Our Goverment will compensate at leastpoorest ones. Fuel is taxed a lot, so they can decline the extra incomming tax, which is in %.

That dont solve anthing here, but people feel the Goverment at least try to make something to the not so bad.

Joe Biden is sitting on your face and shitting in your mouth. Again.

Ok, so, he is giving a press conference with everyone wearing globalist-technocrat enforced masks and they think they can have any credibility? Terrorists? C’mon, of course there is foreign agitation, massive influence and funding, but it’s still your own stupid citizens who do that (with help from a few ‘friends’ from abroad).

I agree. I have looked at all medias. he only ones paying the socalled violent gangs can be Russians by Putin.

By that its an excuse to come back there regaining control.

But I think its local ones only.