UK Defense Secretary Michael Fallon’s comments have been pre-released to the media and give notice of Britain’s sending troops to countries bordering Russia on a permanent basis:

`We are already deploying RAF jets to the Baltics and providing crucial training to the Ukrainian armed forces,’ Mr Fallon plans to say. `Now we will have a more regular drumbeat of troops deploying in the Baltics and Poland.’ FT

He has already stated: `This is further reassurance for our allies on the eastern flank of Nato – for the Baltic states and for Poland…That is part of our more persistent presence on the eastern side of Nato to respond to any further provocation and aggression.’ The Guardian 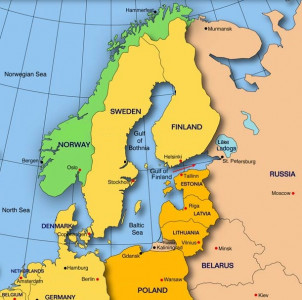 According to various reports in the media the troops will join German and US troops already based in Baltic countries of Lithuania, Latvia, Estonia and Poland; and the commitment will initially comprise about 100 troops. This is extremely worrying and it is a pivotal moment in UK and NATO history, although it is predictably downplayed by the UK Government and the initial deployment figures provided are low. Considering the Cold War period, the crucial theatre in Europe was Berlin where the forces of NATO faced the Red Army. Now NATO borders Russia itself, a few hundred miles from Moscow and St. Petersburg. United Kingdom of Britain and Northern Ireland are sending armed troops to be based permanently right on the borders of Russia. This is HUGE as UK policy dictates that exact details of military deployments and military equipment need not be released. So the initial figures of a hundred or so personnel could change without notice. UK troops camped out a couple of hundred miles from St. Petersburg, but remember this is Russian aggression.

UK citizens did not have say in this dangerous escalation of course. However, there does come a point when the general public must be held accountable for their silence and inaction; and specifically the media for its complicity in this threatening behaviour. They routinely support the narrative of Russian aggression and dutifully engage in anti-Russian propaganda, even to the point of defending the worst terrorist organisation in the history of mankind, ISIS. (Written by Nenada)

Even Britain has fallen to the level of a U.S. vassal. What does this mean? Even the mightiest empire must fall in its time. Rome, London — and soon, Washington!

But are you so sure that an ascendant China ruling this world would be better?

Or under an Islamic construct?

I to would prefer to live within a US constitution of Liberty Equality Fraternity at least this sets the normative state although it may at times deviate to one side or the Other – as any behavioral variance individual or cultural will inform. Read the cultural codex fine print it tells you what you will be, not may be in the end subject to.

The “US constitution” says nothing about the ‘enlightenment’ era slogan “liberty equality fraternity” – even if it should. As a matter of fact, “Liberty Equality Fraternity” was embraced by another school altogether (the Marxists.) Capitalists have no use for “equality or fraternity” (most especially not equality).Even so, the US constitution contains many good ideas, but faced with a legalized bribery attack , it failed ultimately. It failed because the federal Judiciary branch that is responsible for deciding which laws are “constitutional”, (acceptable based on the principles put forward in the constitution) is only one step away from the other two “democratic” branches, which as it turns out, were paid for and bought fairly easily by ruling class cash as soon as the will to do so was apparent.

Ha-ha. “US constitution of Liberty Equality Fraternity “? You must be kidding. There is no US. It has been hijacked by Jew Zionists long ago .

Bibi to Congress – “You work for me and don’t you forget it !”

There is no US, neither US constitution. All of that has been hijacked by Israeli Zionists. Read this : Bibi to Congress – “You work for me and don’t you forget it !” http://www.veteranstoday.com/2015/03/21/bibi-to-congress-you-work-for-me-and-dont-you-forget-it/

China’s ascendancy to world rule is a very long shot. The U.S. is not falling off the perch, it is being knocked off it by the resistance of the people in Ukraine, in Iraq, in Syria, elsewhere. Do you suppose that having learned so much about imperialism from so “good a teacher” as the United States, the people of the world are about to knuckle under to China? I doubt it. Besides, China has plenty of problems of its own. We will seek how much longer they will put up with the capitalist-roaders Chairman Mao warned them about.

no.(( on the contrary : the USA is the vassal of the Fraternization, as they always were.

Their are also British SAS troops in Norway always placing sensors along the Russian border. They have been their for many years. The evil-UK-Norwegian alliance is a threat to all life forms on the planet. Norway is also developing advance ground to ground missiles themselves capable of carrying conventional and Nuclear warheads, encase Mi6 ever supplies Norway with Nukes, Norway will already have a delivery system for them.

So british puppets still belive that would be more than just a cheap cannon fooder in case of conflict with Russian Federation.Pure lunatics …..

I hope Russia and China wipes the ground with these Jew own bastards ..”But are you so sure that an ascendant China ruling this world would be better? if the Jews win we will all be living in the dark ages and if any body says anything being a goim (animals to them ) they will cut your head of rape your children and cut your organs out and sell them….all fact this is what anti Christ jews do and have always done thats why they have been kicked out of nearly every nation because they are SHIT murdering satanic low life scum ..if you see a jew tell it its days are numbered they are all going to die

Best not to play with fire @David_Cameron. 1 stick can ignite a matchbox. 100 matchsticks can ignite your country, says @PutinRF. Ha ha ha

Just ridiculous. These guys will just get drunk with prostitutes during all staying.

Do you really think that Russia is concerned with “attacking Baltic” or afraid of such poultry ?

That’s right, wind up the tension. And why are British troops going to the borders between two oher countries?

Britton is as guilty as America, is the truth. Why are they not helping Putin who is getting rid of the terrorists? That’s the question! They all appear to be for the terrorists they put there. It’s exactly what it looks like. They are Zionist, NWO, supporters, that’s why!

The troops have stopped at a McDonald’s along the way. One of them had a Happy Meal, and the other had a McMuffin and a coffee.

UK is just US’s stooge, along with australia, nz and canada.. how the citizens of these country feel when their leader sell their lives to support american foreign policy ?

I am from NZ and I deplore what our current govt is doing. TPPA for us is the death of democracy in our country. I’m stunned at how this deal was pushed through with no public debate allowed. John Key does not have the right to govern us . . he is a muppet . . a puppet . . He has sold NZ to multinational corporations.

that’s whats totally despicable.. the australian , nz and canadian goverment totally act behind their own people’s will and wish.. they give away their treasuries and their country’s patriotic soldiers to fight for america’s wars just to prop up america’s dying hegemony…

The real reason Russia and Syria are being targeted right now.