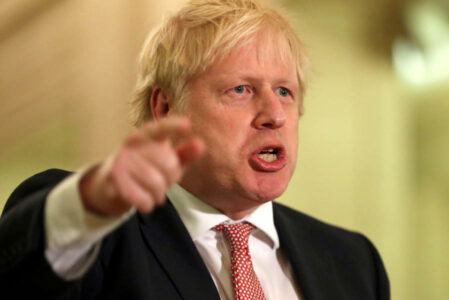 On July 7, Sky News channel reported that the Prime Minister of the United Kingdom, Boris Johnson, will resigning.

The PM spoke to the 1922 Committee chairman Sir Graham Brady. He said he will stand down, and a new Conservative Party leader is set to be installed by the time of the party conference in October, a Downing Street source said.

The report also noted that Johnson will make a statement today.

More than 30 members of Boris Johnson’s administration resigned over the last two days. The Tories will be changing party rules to restart discussions on a vote of no confidence in the British prime minister.

British officials are beginning to leave their posts one by one. The reason for this precedent was the scandal associated with Boris Johnson. The officials began to apply as early as July 6. A total of 33 people left the Conservative government. The last to leave the administration was Rachel McLean, the Secretary of State for Protective Services, who had been working to combat domestic violence.

Not even a month has passed since the vote of no confidence was initiated, and that vote was passed by the Conservative party. At that time, Johnson remained in office by a narrow margin. At this point, one could say that Johnson did not have long to stay in office.

Finance Minister Rishi Sunak and Health Minister Sajid Javid were the first to tender their resignations. Sunak even published a post on Twitter where he said that it is very difficult to work in the current government while keeping a clean conscience.

“The public rightly expects the work of the government to be done properly, competently and seriously. I recognize that this may be my last ministerial position, but I believe these standards are worth fighting for, and that is why I am resigning”.

Boris Johnson thanked the officials and immediately found a replacement. Education Minister Nadeem Zahawi moved to the Ministry of Finance and Michelle Donelan took his place. Steve Barkley became head of the Ministry of Health. Later, 18 more people resigned, including the minister of children’s affairs, the minister of state for schools, and the vice-chairman of the Conservative Party.

Her report stated that members of the prime minister’s office and the government had indeed ignored their anti-code restrictions. Her original report, however, did not include any names or details.

The scandal itself was about Johnson promoting the people he wanted in government. Johnson’s latest choice was MP Chris Pincher. Although Chris himself had repeatedly shown his undignified behavior. Pincher was the deputy chief organizer of the Conservative Party in the House of Commons, then there was an incident where he harassed two men at a party. After he was declassified, he resigned from his post. Johnson had to apologize for the situation.

The apology was not enough. The Tories continued to press Johnson. Several MPs in the question session to the prime minister suggested that he should leave. Boris Johnson was also reminded of his words about a new term, which further alienated parliament. Johnson was also asked if there were things that would make him leave. The prime minister replied that it was an inability to pursue his policies and an inability to help the Ukrainian people.  The entire session, which lasted about an hour, was accompanied by shouts and whistles from the audience, and Johnson had to raise his voice more than once in an attempt to respond to MPs.

The leader of the opposition Labor Party, Keir Starmer, said that Johnson’s government was “collapsing.” Liberal Democrat Party leader Ed Davey called for Johnson to resign immediately. This would mean holding early parliamentary elections in the country – polls suggest that the Conservatives could lose a significant number of seats in them.

Johnson is unlikely to stay in office longer than he should, but to resign he would have to sign his resignation letter if he loses the trust of the party. He could also lose his post if his cabinet collapses.

Johnson already overcame a vote of no confidence on June 6, which means he has been granted immunity for 12 months from such a procedure. Former Deputy Prime Minister Michael Heseltine, who is 1990 was not afraid to challenge Margaret Thatcher herself, believes that the Conservatives themselves already want to get rid of Boris Johnson.

Britain is a now global joke but the Anglos are still very devious backstabbing bastards who are wasting billions of “defeating Russia” fantasy and also stoking tensions in Asia between China, Taiwan and India. It is time the Anglo idiots have a good look and how fast they are being relegated to the sewers of history. Russia will WIN and outlast all these stupid hatefilled Anglo trash. JAI RUS!

Mate, the Jew clown Zelensky is next. Both of them need to be tried for genocide and war crimes.

We have enough problems in UK and these egotistical clowns feeding Russophobia have caused misery in Russian Ukraine which is a Slavic domestic issue. It is time to leave Europe alone as Brexit was supposed to do. Let the Russians and Europeans sort out Ukraine issue peacefully. Russia, as even Kissinger stated has genuine concerns about a rampant NATO encroaching in its lands, and rightly no Russian will tolerate that. It would be like China arming Canada and stoking a bloody conflict. Let’s hope some mature grown-up takes over and looks after the interests of Brits, and deal with the economic mess we are in. I say, good riddance.

Mature grown -up,good luck with that,they had a chance with Corbyn but the Deep state stopped him.

Yes, Corbyn was tagged “anti-Semitic” instantly as the Labor questioned Zionist oppression in Palestine. The deep state really is too well entrenched in UK. Lord help us gain our freedoms.

Another MI6 anointed racist murderer will come up and UK Anglos outpost will continue sinking further until citizens take back the country or NATO -Russia war starts proper. In the war Scenario, they UK and Poland will be the first to be shelled every square meter (conventional) to pursuade other cowards to sue for peace.

After a such a brilliant and successful carrier in destroying Ukraine, Her parasitic Majesty has appointed second Jew Volodymyr Zelensky as PM and he has agreed to serve as interim Prime Minister of the United Kingdom. God save the Queen and Britain Both, because nothing will.

OHHHhhh I was waiting for the lgtb climate changer covidiotic nazi Boris the Clown ( like zelonsky the Clown ) take is shirt off and make a blow job to a Horse !!! Now is to Late is running away from all the mess…………….Lets hope he change is sex and got a covid party in the Anus !!!

Can it be any worse than BoJo? “The old guy is always better than the new guy” – they say in the politics. Let’s hope not. Let’s have a faith :o)

All Anglo politicians are prostitutes of the Bilderberg Jews and the new clown will also be a Russophobic moron. You have take my word for it. The British hate the Slavs and Orthodox since Czarist era, and are even more desperate and Russia gets more powerful by the day. JAI RUS!

For the people of the UK it can get a lot worse. Labour could get back into power. Internationally, probably not much will change.

UK like US is a warmongering failed state, imperialist plunder is not possible as power has shifted and even small nations can defend themselves as Afghanistan has shown. There is massive poverty in both US and UK, the prime warmongers, and they can’t even provide basic services to their poor people. With such heartless governments no wonder we are going to hell in a basket.

Stupid Bojo dumb bastard has been drunk and babbling Putin and Assad must go LOL…now he is in real shit…SLAVA ROSSIYA!

Boris can resign but Assad cant 🤣🤣🤣

Boris will lead Ukraine while Zelensky will be interim UK PM.

Zelosnky will go to married with prince of the money bags !!! and boris will go to Kiov to make an abortion !!!!

They are totally interchangeable.

Every leader that mocked Putin too,got TKOd by the truth,faster than blink when least expected I may add!

we came, we see and we make nazi Sheizen !!!

It’s the curse of British PM’s that decide upon having terrible relations with Moscow as HMG govt policy.

Rapid fall from grace and then… Downfall!

HMG needs to get a HIMARS up here geriatric arse.

Finally the ignorant boar is leaving the British Muppet Show. What an embarrassment he was. He’ll be remembered as the king of clowns. Idiot that ignored any logic. The Queen should give him a few over his back.

I hope someone kills this fat warmongering swine

Simpatico. Exactly, our corrupt systems compromised by Bilderberg corporations, military industrial complex, unsustainable arms spending and greed are destroying the west. While we kill, the Asians build fast trains and their economies.

Goodbye and good riddance…but only to be replaced by another puppet.

I think British get a new leader like Boris

Taliban shall sent RPG on his head to erase his insanely hair style.

Yes got the loadfull from Erdo up his shoulder didn’t he,good riddance doris gayee!

A total of 33 people left the Conservative government. 33.

Next NATO secretary general? He will be paid for his many services to the Regime, notably demolishing Corbynism.

Y’all heard it first from me.

Back in the 80’s I took the time to read Paul Kennedy’s book The Rise and Fall of the Great Powers. If Anglo and American politicians had taken that book to heart back then, they wouldn’t be in the position they’re in now. What did they expect when they exported their manufacturing and outsourced the means of production? America and the UK are on the fast track to global irrelevancy.

Far outlived his usefull brexit purpose,only to become full bore nazi,that is no democracy,fuk it off GB!

Maybe now Mr Johnson will have time to get a haircut.

Put Charles, from the Palace, in charge while the Gov does a complete house cleaning.

I don’t feel the slightest bit bad for BJ

I don’t speak Russian, and am not a poet, but I did manage to do this : “пока-пока либо до свидания,