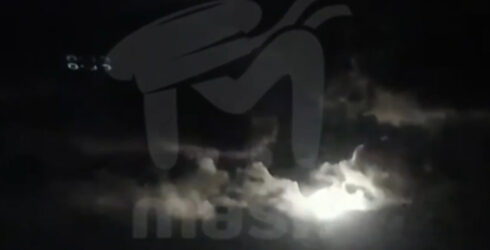 Another drone attack is currently taking place in Crimea. Foreign UAVs are targeting the peninsula from the Black Sea in different regions. So far, explosions have been reported south of the city of Sevastopol, located on the western coast of Crimea, and in the area of the city of Yevpatoria, located in the southeastern part of the peninsula.

Russian air defence systems were activated. According to preliminary information, two UAVs have already been shot down. So far, no explosions on any facilities have been reported.

The governor of Crimea confirmed the attack, claiming that the air defence systems are intercepting the targets.

As always, the attack is coordinated by NATO intelligence forces. The strategic RQ-4D Phoenix UAV of the NATO Air Force which took off rom the Sigonella airbase is patrolling the airspace south of the Crimean peninsula.

The ongoing UAV attacks are likely aimed at identifying the positions of Russian air defense systems in the Crimea. So far, NATO has not achieved any strategic successes in such provocations in the peninsula.

Russia Is Looking Like A Fool! Do i need to say more?

Skull322
Reply to  Ghost of Moscow

Ghost of Moscow
Reply to  Skull322

Last edited 6 days ago by Ghost of Moscow
-10
Reply

jeffglobalmotion
Reply to  Ghost of Moscow

Cromwell
Reply to  Ghost of Moscow

No you need to shut your mouth

Kurdish terrorists assault and murder civillians in Iran right now. They must be pissed that IRGC bombed them in Iraq

So why isn’t Russia shooting down the NATO RQ4D Phoenix drone that is coordinating the attack??????????????

More proof this is all a dog and pony show. Or Russia is too chicken shyt to attack it.

Iran wasn’t scared to shoot down an American drone. Why does Russia have its tail between its legs?

“As always, the attack is coordinated by NATO intelligence forces. The strategic RQ-4D Phoenix UAV of the NATO Air Force which took off rom the Sigonella airbase is patrolling the airspace south of the Crimean peninsula.”

Is there any reason why this UAV wasn’t shot down being part of an attack on Russian territory? Nothing adds up about this war, other than Russia is fighting to lose. No superpower plays defense exclusively like the Russians have been doing.

Maybe they are preparing to retreat from Crimea next? I wouldn’t be surprised.

It seems they took the Kinburn Peninsula

Some oligarch got paid.

Iran drone will destroy it soon (The strategic RQ-4D Phoenix UAV of the NATO Air Force which took off rom the Sigonella airbase is patrolling the airspace south of the Crimean peninsula.)

So we won. Exellent! Then why are we retreating?

Because your losing badly .

Fukhead, that clown is just like you. Why are you shit-talking him for? Did you misread it?

Also, “Because your losing badly .” you’re*.

These terrorist attacks on Crimea are only going to speed up 2 processes. #1 Ukraine better get ready for massive bombardments of their energy infrastructure starting tonight as retaliation. Expect Ukraine to wake up in the morning with 25 percent less available energy. #2 These terrorist attacks by Ukraine and NATO will GUARANTEE the complete liberation and reunification of Odessa by the Russian Federation. Russia now knows they can never leave Odessa in Ukraine’s control because they will continue to launch terrorist attacks. Me thinks that the majority of the 300k (more like 500k) Russian troops that are beginning to arrive in Ukraine will be liberating Odessa and the liberation will be a 3-pronged-attack including a bodacious amphibious Russian incursion that will leave the Ukraine/NATO military high command shell shocked. 7N6 over and out…

When is the timeline for the assault on odessa?

As soon as Ukraine is in total darkness which is approaching.

USA is a shithole, EU is becoming one
Reply to  7even-N-6

I would keep them in thee dark and freezing winter at least a month before knocking down all the remaining armed forces of Ukronazis. And when the assault time comes, the NATO drones and surveillance would be the first to go… 😁

Z all the way to Transnistria! 🇷🇺

Weird. I mean, the Ukrotards have been yapping about it since 2014, and since that time they’ve only lost a few tens of thousands of square km of territory in addition to Crimea. Dare to dream, li’l lady!

Anything to prevent the discussion about the worldwide depopulation crisis right Bourla… crimea against humanity has no expiration date for prosecution.

It would be excellent if somehow the RQ-4D Phoenix UAV could be landed on Russian soils.

Shoot down the control plane, stop being such pussies.

So, Russian air defence systems are being hunted by the inferior Ukrainians. Funny isn’t it.

Russians are losing in Crimea. This is the beginning of end of Vladimir “Tiger” Putin.

Jeesus how Russian military has been humiliated by Ukies. No wonder more and more Rooskies are pissed off. However there are also growing numbers of Rooskies ridiculing their corrupted and poorly trained Army, Navy and Air Force.

If these drones took off from the Siginella air base in Sicily, it means NATO or the USA and not Ukraine has launched an attack on Russia. Furthermore these drone must have been flyng over some countries to reach the Black sea which must have been informed about this attack. Is World War III being started ?