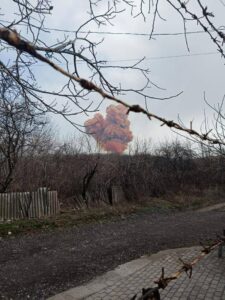 On April 5, an acid tank in the 1st workshop of the Zarya plant was blown up in the town of Rubezhnoye, in the LPR. The town is partially under the LPR control, clashes continue in the south-eastern districts of the town, where the Zarya plant is located. According to preliminary data, the explosion was carried out by the AFU before their withdrawal from the town.

Local reports confirm that the moment of the explosion was chosen in accordance with the direction of the wind. Thus, the acid cloud is expected to move to the north towards the town of Kudryashovka, which is under the control of the LPR.

The head of the Luhansk Regional State Administration, Sergei Gaidai, confirmed that a shell hit a tank with nitric acid in Rubezhnoye. He addressed local civilians on social media and recommended not to leave shelters, close doors and windows.

Civilians left in the area are the main victims of the explosion. Those living in nearby villages will be affected anyway. If the wind changes, the acid cloud may reach the large cities of Severodonetsk and Lysychansk.

Nitric acid is dangerous when inhaled, swallowed and gets on the skin and mucous membranes. In addition, with local exposure to the eyes, nitric acid causes severe damage with large necrosis of the cornea and conjunctiva, which leads to loss of vision.

The Zarya plant is a leading enterprise of the chemical industry of Ukraine, located on the southern outskirts of the town of Rubezhnoye. Among other things, the enterprise includes storage facilities for sulfuric and nitric acid. The production was also engaged in the production of industrial explosives and chemical plant protection products.

The doctrine of “total defence” proclaimed by the Kiev officials supposes that any sacrifice, including health and lives of a large number of civilians, is nothing if the AFU actions may harm the Russian soldiers, even potentially. As a result, while staging propaganda provocations, blaming Russia for the so-called “genocide” of the Ukrainian people, the Kiev regime is eradicating its own population.

Science!
Reply to  Katsaps ran away

Blowing up chemical plants that will cause massive injuries to the local population is the patriotic thing to do. Said nobody ever, except George Soros and the retarded goblins who for whatever reason do his bidding…

the end
Reply to  Katsaps ran away

Exactly like that. I have already started contemplating on opening a tourist agency for EU, British and US tourists to visit this plant. There is also a nice acid swimming pool, which takes away all the pain.

www.HighPay1.com
Reply to  the end

I started earning $85/hour in my free time by completing tasks with my laptop that i got from this company I stumbled upon online…Check it out, and start earning yourself . I can say my life is improved completely! Take a gander at it what I do….. For more detail visit the given link…….. 𝐜𝐚𝐬𝐡𝐮𝐩𝟏.𝐭𝐤

Not much of Ukraine left LOL

I am creating an honest wage from home 1900 Dollars/week , that is wonderful, below a year gone i used to be unemployed during an atrocious economy. I convey God edc08 on a daily basis. I used to be endowed with these directions and currently it’s my duty to pay it forward and share it with everybody,

Hohol liars and losers are getting desperate. SLAVA ROSSIYA!

Yes, the desperation of the US and UK is a joy to see. There will be rioting as food becomes scarce in the West, partly because the sodomised West is living in a dreamworld of childish propaganda, and has been since WW2.

the end
Reply to  Pedo Andy from Fcukingham Palace

I wonder if they did not intentionally blow up Chernobyl plant back in USSR. Probably an MI6 inside job.

Fake News behind Paywall for Dimwits = Ukro-Nazi video of 2 days before shown NO BODIES on the same street. Go light a candle to the non existing Ghost of kiev.

Blackwater is in Donbass with the Azov battalion: 1 February 2022 voltairenet.org/article215489.html

They should arrange a fight with Wagner, like a new league perhaps near Dnirpro.

There was a fight between american and russian special forces in Syria. The russians fucked the yankees pretty badly. I remember the video where two armored vehicles rammed each other. The american one’s motor gave up. The russians stopped and started shouting “Davai davai America”, while laughing like mad.

I want to see that video. Looks fun. Please share.

If only Wagner existed, that would be so neat.

Clyde posts for a living
Reply to  Clyde

If only you were not a cheap paid troll. You did not get your latest memo from your master.s though tass.com/world/1375523 Russian sources telling themselves

How many posts today boy? Need another bottle of vodka!

the primitive behavior of nazi ukrop justifies the entire demolition of all ukropistan infrastructure, and the nazi minions that serve usa fascism

Ukrainian UPA was killing Polish children’s, woman’s and elderly during WW2. This is nothing new Ukrainian murdering people.

Russia should nuke UA for this.

And for revenge Poland is supporting them right now. What faggots these mentally impaired poles.

Word. Polaks sell out easily, are nationalistic by nature and arrogant.

If Russia was evil, they’d completely turn off the gas and see the west slowly die.

But back on topic: what do you expect from a nation that decapitates/torchers/maims/rapes/shoots rockets at civilians which they tried to gather in one central area via social media bait…

Really I am not shocked at all, at anything anymore.

We have a new saying over here “We are not Ukrainian, stop lying, tell the truth!” “hey stop that ukro tard behaviour, we are better than this”

Last one is my favourite and I’ll probably have a golden placate made out of it.

the end
Reply to  joe

Don’t worry. The superb job Ukrainian Nazis are doing, Russians are going to disband Ukraine and delete its existence from history. I would do that.

So, why does Poland appear to be supporting Ukraine?

I have now the utmost contempt for that Ukie scum. They fit well together with the Western World

nothing more could be expected from the AFU

Nothing less the the complete capitulation and denazification of Ukraine is acceptable!

When Russia closes the gap of the pincer movement in Donbas they need the exterminate the Ukrainian army. From the lowest private to the highest general, to the last man. When the Bible states that when a man has sex with an animal they move both must be destroyed it’s the same thing here. Every soldier is like-minded the atrocities that they commit and will do needs to be forever erased. None of them are salvageable.

Ukraine commits the war crime of using chemical weapons on civilians. Wait, the NY Times has satellite photos showing this happened last March while the town was under LPR control.

H. L. Mencken (1880 – 1956): “The men the American people admire most extravagantly are the most daring liars; the men they detest most violently are those who try to tell them the truth.”

When a well-packaged web of lies has been sold gradually to the masses over generations, the truth will seem utterly preposterous and its speaker a raving lunatic.” ~ Dresden James

Are we there yet?

Yes Liberated and you lost, now go fuck a duck!

Please don’t be unkind to ducks.

This is how Ukrainians fight under JEW leadership? Ukrainians are Zionist Jew Scum. I support the Nazis of WW2 but these fake Jew paid Nazis are a JOKE in Ukraine. PURE SCUM.