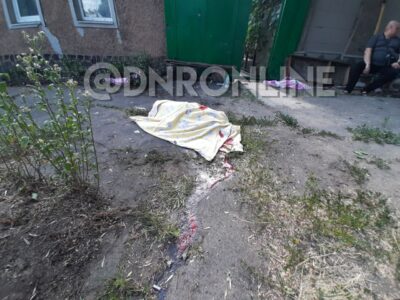 On July 5, the Armed Forces of Ukraine resumed shelling on civilians in the Donetsk and Luhansk People’s Republics from the very early morning.

As a result of the shelling in the Voroshilovsky district in the city of Donetsk, a 10-years-girl was killed.

In the Kievsky district, a man born in 1959 was killed.

7 more civilians were injured in the city.

As a result of the shelling of the city of Donetsk, the DPR State Unitary Enterprise “Zasyadko Mine” was completely de-energized. According to preliminary information, 66 miners are underground.

The area of Shcherbakov Park was shelled, KAMAZ Center was under fire in the Kievsky district of Donetsk. As a result of the shelling, the building of a large car center, which has been functioning in the DPR all this time, burns out completely.

In the Luhansk People’s Republic, the AFU fired again civilians in the town of Stakhanov with Tochka-U missiles. As a result of the shelling 6 residential buildings, the administrative building of the First Transport Company and the State Unitary Enterprise of the LPR “Republican Network Company” were damaged. No casualties were reported.

The terrorist warfare of the Kiev regime is ignored by the so-called international community. Attacks on civilian targets which pose no threat to the Ukrainian military has been continuing for 8 years. The number of casualties grows on a daily basis.

in western country they kill children in the wombs of their mothers through abortion, in LPR, DPR, Iraq, Somalia, Niger, Mali they are shelling civilians. it is more clear that western values are the synonym of satanic practice.

Oh fuck off with the abortion bs, its the woman’s choice end of story. Her body her choice. Incel idiot.

Everybody in this forum already said many times. The one in Kiev who gave the order to kill the unarmed civilians and children in Donetzk need to be taken down. Cut off the head of the snake.

The Russians could have already done somethin about this, but they haven’t. Why haven’t they put up S-300, S-400 , Pantsir and other anti-missile systems all arounf Donetsk? Why don’t they launch a major offensive on Avdeevka?

They obviously have other strategic goals. They also want to potentially increase mobilisation efforts in the DPR. More civilians killed, more people will join the DPR troops.

Do you know why you always lose wars? because you only have to beat in the head like a Biden, and it’s no wonder what kind of ruler, such people. After all, the people bring the ruler according to their conviction. Putin will be smarter than you and does not need prompts! He is a former KGB colonel, and on the spot he knows better what to do. He is a dyudoist, with a cold, calculating head. Judo is distinguished by less use of physical force when performing techniques and a wide variety of permitted technical actions. He knows how to turn the strength and actions of the enemy against himself. the embargo and the ruble is an example for you. Do not teach a scientist couch general! and here’s a link for you, read it and think what a powerful response Biden received, Putin simply destroyed America without weapons!

S-300 shoots down planes and large missiles, pantsir shoots down large drones and smaller missiles. Ukrainians are using artillery with hundreds or thousands of shells a day on Donetsk, not much protection against that but to go hide in a bunker or the basement. Agreed though that Donetsk is a more high priority goal than Lisichansk, wondering why they didn’t go for that first, but silly to to think they want more civilian casualties when that’s what they are there to stop. Troops not in need so much now that positional artillery duels is the current strategy, Russia has hardly lost any soldiers in the last month.

I don’t understand why Russia is not hitting the entrenched Uke forces around Donetsk with massive thermobaric strikes daily. That’s the most effective weapon aside from smaller bunker busting munitions. Hit a focused area then have the DPR troops go in there and clean up with grenades and flame throwers.

Then hit Washington, because the head ISN’T in Kiev.

My heart goes out to that mother and the little girl killed. May God somehow heal this terrible wound for them and may he grant Russia the complete ability to destroy these demons responsible for this horror. My prayer is that justice and death will come swiftly to those responsible.

No, that would turn russians forces into barbarians, like the kiev orcs.

Keep calm and carry on, justice will come.

What a dumb comment! Bombing the enemy’s capital during war (ESPECIALLY when the same enemy is attacking your population centers with abandon) is NOT “being a barbarian”. Letting your own people suffer with no retribution, just to prove some abstract “moral superiority” point, is the height of stupidity.

Kiev is full of pro-Russian people. If you want revenge flatten Lvov with bombs.

precisely—immoral anglos are hyenas pretending to be people

“The terrorist warfare of the Kiev regime is ignored by the so-called international community. Attacks on civilian targets which pose no threat to the Ukrainian military has been continuing for 8 years. The number of casualties grows on a daily basis.”…

And this in a nutshell begs the biggest question of “WHY” or “HOW” the Russian Federation could allow itself to remain under the UN as a member given the “h0$t”s malign nature?…

Why does it place it’s foreign service (Andrei Karlov, Vitaly Churkin) and military in jeopardy every day that it refuses to part company from that organization that masquerades for Peace but is the antithesis… By starting it’s own agenda with a new UN HQ’s in Moscow leading the way by example including it’s commodities market(s)!?…

It takes a certain type of depraved pos to target civilians. I’d like to think it’s a one way ticket to hell.

At the present time the Russians are the ticket masters and the trains are running overtime.

You have no shame you bitch as scammer, a 10 year old girl is dead, and you posting this same bullshit comment on every video, i wish i could reach out through the screen and rip your fucking throat out!

Last edited 7 months ago by The Rising Star
11
Reply

Work AT Home
Reply to  The Rising Star

Work AT Home
Reply to  The Rising Star

Absolutely horrible. The coward fake “nazis” fighting for Jewish Zelensky and the Jews in the west will pay for this. Russia please find and destroy them all.

Firing wildly into civilian areas isn’t going to get the job done. These atrocities will be remembered for a long time. These actions, and others like them, may well spell the end of ‘Ukraine’ as a country.

It has already been decided and I personally support that decision.

I blame Russia and the local authorities for this. Instead of killing the Ukrop prisoners they treat them with respect. Every family member of a local dead civilian should be allowed to go to where they are holding ukrop prisoners , pick out a few and then execute them in they way they want.

only non Russians believe Putin matters; Russians are aware that the social metabolism matters most, not our leaders….Putin only matters for non-Russians….the emphasis on leaders is mainly an anglo problem—narcissism—self doubt and self hatred

Those are heartbreaking videos. I am glad that Russia is purging these Ukrainian barbarians.

These Ukro bastards who are killing civilians make Viktor Sayenko and Igor Suprunyuk look like angels.

This is the saddest of sights an innocent child who would have no conception of why this and other indiscriminate attacks on her and her Community were happening. The little girls Mother at her side my heart goes out to her. The monsters responsible for this Dress in $5000 business suits and sit in the halls of power in Brussels London and Washington DC. They hide behind laws that they make and put on a front of respectably to the world around them. They are pure evil. I hope that every politician in the EU sees this image when they look at their own children and grand children. What this family are going through now because of decisions made by Western politicians who act on behalf and in the interest of big business . Pontius pilate washed his hands .But like many other victims the Western politicians can never wash their hands of this innocent childs death and the ordeal who family are going through. We pray for our brothers and sisters in Donetsk. God bless …..