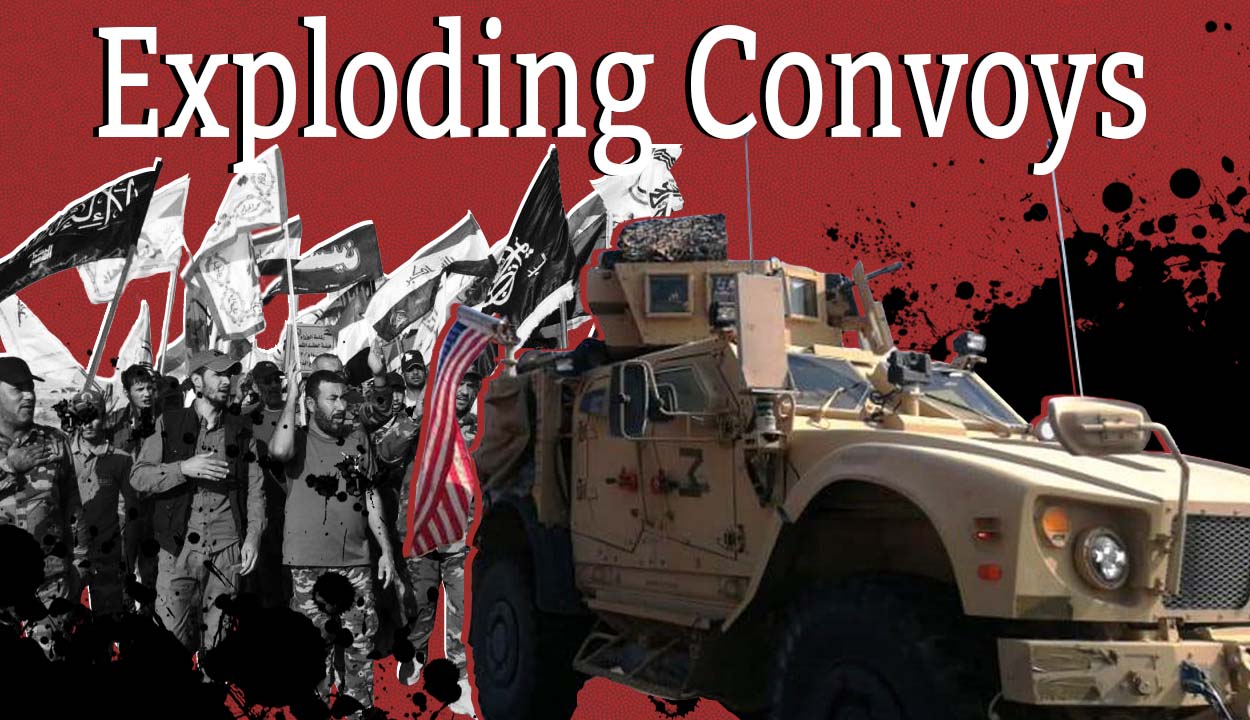 A video showing only four of the eight attacks which took place on August 24 was released by Saryat Qasim al-Jabbarin.

According to the Sabereen News, some of the targeted convoys were moving Humvees and an unidentified type of MRAP [Mine-Resistant Ambush Protected] vehicles to US bases in northern Iraq. The US-led coalition was likely planning to move the vehicles, specifically the Humvees, to northeastern Syria later on.

The attacks on US-led coalition supply convoys and bases in Iraq will likely go on as long as Washington is determined to keep its forces in the country. On August 25, another attack targeted a supply convoy in al-Diwaniyah.

Its no life insurance to be on a U.S. military convoy these days… Oy oy…

Get back to me when they are using a shovel to scrape the bastards off the road.

” It is no secret that growing economic relations between Israel and China are raising concerns in Washington, despite internal warnings in the occupation state that Beijing is exploiting these ties to obtain military and security technology through secret means. The echoes of a Chinese cyber-attack on Israel still reverberate.

Between 2007 and 2020, China invested $19 billion in Israel, including $9 billion in technology and $6 billion in infrastructure. The annual trade flow between the two has also increased from $12 billion to $15 billion, making China Israel’s third-largest trading partner after Europe and the United States. However, since 2018, there has been a decline in Chinese investment in Israel, as has happened elsewhere, although China’s interest in Israeli technology has been demonstrated through Beijing’s endeavour to send academics to Israel, buy companies and establish research and development centres. ”

HAHAHAHA, What a joke, what a propaganda!

No, only 19B that is cute buddy. “The United States has given Israel a total of $146 billion in bilateral assistance and missile defense funding through 2020, according to the Congressional Research Service (CRS), which provides nonpartisan research to lawmakers. That makes it the largest cumulative recipient of U.S. foreign aid since World War II.”

Ofc, that number is much higher when you include all Zion slaves in the EU as well. 2017 – “For example, according to data from the Israeli Ministry of Economy and Industry, Chinese investment in Israel in 2017 stood at $3.5 billion, while American companies invested $21.1 billion, Dutch companies invested some $13.5 billion and Canadians about $4.7 billion (see Graph 10 in the Appendix).”

Also, “Based on the agreement, China has agreed to inject $280 billion to $400 billion by foreign direct investment into the Iranian oil, gas and petrochemical industries. The original plan for cooperation had been proposed by Chinese leader Xi Jinping during a 2016 visit to Iran.”

True, China will invest anywhere there is a profit. They’re mostly interested in Israeli know-how, so naturally they invest. As they do in many European countries, especially Germany; likely for a similar reason: acquire technology and info. Politically, China will push infrastructure projects in Central Asia, which it needs calm. Further afoot, there is support for the Shiite axis from Iran to Hezbollah.

Possibly. Yet Iraq isn’t plagued by “allegations”… do you have any notion of what is actually happening in Iraq besides some road side bombs and occasional IS attacks? It’s an utter desaster. Only militias rule. They will force people into their ranks, rule over everything. Iraq used to be a beacon of erudition, now only the gangster rules. It’s sad. But yes, withdrawal of the foreign occupaton would be a start.

It seems that the IEDs are too of the road and these are just detonating them, which doesn’t make damage tho, most damage from IEDs comes if the very truck step on one.