The General Commander of the Brazilian army assured that the Armed Forces continue to be under the authority of the President Dilma Rousseff, as the Constitution commands. 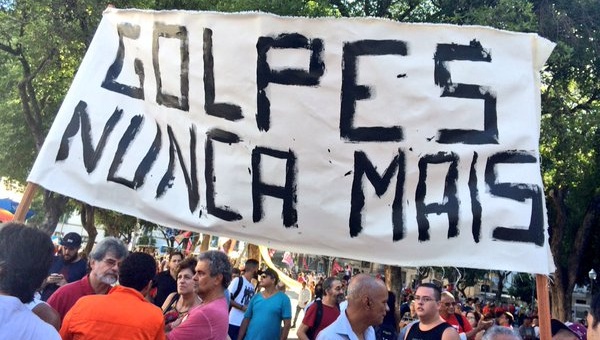 The Armed Forces of Brazil will perform in compliance with the Constitution to guarantee the stability inside the country in response to the attempt of coup d’Etat that the right-wing orchestrates in advance against the president Dilma Rousseff, and the attacks against the former president Luis Inácio Lula Da Silva as well.

The General Commander of the Brazilian Army Eduardo Vilas Boas states that “any attitude assumed by our lines will be supported totally by what’s established in the legal dispositions, from the Constitution to complementary laws, always conditioned to the actions of any of the powers of the Republic”.

In the radio program “El Comandante responde” (“The Commander responds”), broadcasted through a Youtube channel, Vilas Boas claimed that they (the army) will contribute for the maintenance of stability to look for a way out of the political, economic, moral and ethical crises,

According to Lula, Brazilians are not going to tolerate a coup in the country, adding that “the army is an institution of the State and, in moments of crisis, solid institutions become a reference for society who looks at them and awaits for attitudes that point how to overcome crisis”. He also cited article 142 of the Constitution of Brazil that claims that the Armed Forces shall obey the supreme authority of the President of the Republic.

On March 24th, Brazilian citizens took part in demonstrations in Sao Paulo and Río de Janeiro to proclaim their reject to the attempt of coup against the government of Dilma Rousseff which is been taking place since last year.

The demonstrators marched to the headquarters of the TV channel Globo to denounce the participation of this media in the attempt of Coup d’Etat.

Since last year, the Congress and the Brazilian right-wing started a plan to discredit Dima Rousseff’s government and its accomplishments reached in benefit of the people by trying to prosecute the chief of State for the corruption case of the state company Petrobras.

By now, the congress is assessing her destitution and, in case the accusation against Rousseff proceeds, they plan to separate her from her functions for 180 days for investigations. Lula Da Silva, on the other hand, is also being investigated due to the same case.

Rousseff claims to trust that she will overcome the political-legal procedure that the Representatives Chamber is running against her and with which the opposition looks for her renounce.

The only one talking coup is Dilma and people connected to her. What has begun is a process for impeachment. It is not for sure but, she has very few friends at this point.