The immigrants who are in Europe would come to the country in exchange for financial aid. 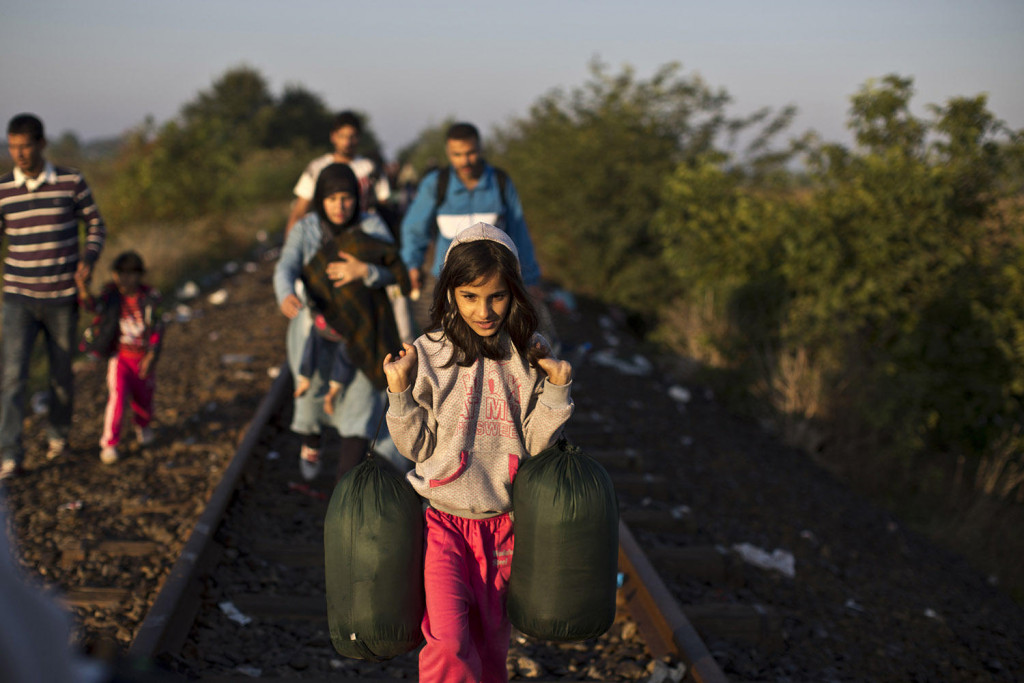 Syrian refugees make their way on a railway track after crossing the border between Serbia and Hungary in Roszke, southern Hungary, Monday, Sept. 14, 2015. (AP Photo/Muhammed Muheisen)

The Brazilian government negotiates an agreement with Germany to receive part of the Syrian refugees who are in a European country or wishing to travel to there – and has already opened a process to assess with the European Union (EU) a dialog to collaborate on the question of the treaties that assist the asylum seekers. In exchange, Brazil asks the governments of Europe to shoulder the costs of foreigners and their integration.

The project was presented by the Ministry of Justice to the German Embassy in Brasilia last week. On March 30th a meeting was held with the EU delegation to start cooperation.

Beto Vasconcelos, national secretary of Justice, confirmed the existence of dialog with Germans and the EU, indicating that, now, Brazil expects to receive specific proposals on the part of the Europeans on how to make this initiative. According to the secretary, Brasilia has opted for “boldness” to deal with the international crisis.

For the time being, there is still no talk in numbers of refugees that Brazil would accept, but there are rumors that it could be Syrians who want to go to Germany but are currently located in camps in Turkey, Lebanon and Jordan. Another option would be to welcome people who are already in Europe, with the goal of reaching Germany.

Sources close to the German government said that the offer was well taken by Angela Merkel, despite the call for payments. Germany needs to ease the tensions caused by the refugees in the recent months, and this offer comes just in time. In 2015, Merkel adopted a policy of opening its borders, which made a total of 1.1 million refugees enter the country. In total, 42% of the refugees were Syrians – the focus of the proposal placed on the table by Brazil.

Most Germans agreed to welcome refugees. However, in the local elections, the party of Merkel was surprised by the ascension of groups of the extreme right, who are against welcoming any refugees.

The Chancellor has repeated times and times again that she will not change her refugee policy. However, due to the rising tensions in Germany, Merkel has already begun to negotiate alternatives to the issue.

The negotiations of Brazil also involved bilateral talks at the UN. On March 30th, during an entity’s meeting to seek solutions to the refugee crisis, the Brazilian delegation adopted proposed to the international community to accept the refugees, not as a gesture of solidarity, but as a right that these people have in their attempts, often desperate, fleeing wars – thousands have died while crossing the Mediterranean and the arrival of spring in Europe should increase the flow.

“Until these people have the ability to return to their homes, we need to rely on the international community,” said the Brazilian ambassador Regina Dunlop.

According to her, since 2013, Brazil has granted about 8,500 permanent humanitarian visas, a program that will be maintained until 2017. In total, 2,200 Syrian refugees are now living in the country.

Sure, why not import the same problems Europe has for a fistfull of dollars….

It is not “humane”to bring a rabid dog into a Day Care.

its the brazil banks saying that not the people

Those REFUJIHADIS are not going anywhere there is NO WELFARE. They do not want to work.

That is more the truth. Cut welfare and give them a ticket home.

They WALKED here they can WALK HOME. do not make the REFUJIHADIS walk all the way here ,,,, SEND those who are concerned about them over THERE to the REFUJIHADIS’ homeland. Send the CONCERNED ONES with THEIR OWN money to pay for the charity they are SO anxious to hand out because “being charitable” with someone else’s money is THEFT, charity must be paid for with YOUR money. What do you think they are going to LIVE ON? YOUR Social Security is being given to the REFUJIHADIS. YOUR PENSIONS (as already proposed by Robert Reich) will be POOLED so EVERYBODY gets a pension. Protect YOUR females –Removing the word rape has parallels to denying the holocaust: http://www.dailymail.co.uk/news/article-3527771/German-minister-told-police-remove-word-rape-reports-mass-migrant-sex-attacks-Cologne-new-Year-s-Eve.html#ixzz45AiPmREj

This should work out well. Brazil gets needed money. Germany gets rid of a problem. Ten years down the road???? Perhaps, they will convert the Catholic.

in 1959 they also elected a rhino for city council