The US has tried to bolster the Afghan government in Helmand Province with air support in their fighting against the Taliban, but the support appears to have gone horribly wrong today, as a US drone attacked and killed at least 15 Afghan police. The airstrike was targeting what the US thought was a Taliban compound in Helmand’s Gereshk District, but was actually a site used by Afghan security forces to meet and plan operations against the Taliban. A number were inside when the US attacked.

The Pentagon expressed condolences for “the unfortunate incident,” but provided no indication as to why they attacked the compound, simply terming the attack part of a “US-supported operation.” Either way, this likely derails the anti-Taliban operation that was ongoing in the district.

Even the dumb must now realise that the US military planners are sadly lacking any form of intelligence.

Had to be counter-narcotics.

If it was counter narcotics the drone operator would have hit the CIA HQ at Langley :)

Other way around, the dead LE were the counter narcotics unit – wouldn’t be the first time. Being counter-narcotics in Afghanistan has to feel like you’ve been selected to play the Master’s Rugby tournament (Monty Python).
https://www.youtube.com/watch?v=8w6Vy3l9Gk4

Anyone remember that Britney Spears song?

Or maybe it was no accident at all, it’s not in US interests to have a secure, stable Afghanistan.

The US termed it as “US supported operation” meaning they were supporting a Narcotic operation in the area sponsored by the CIA and removing obstacles from (Provincial/local police) to its operation. 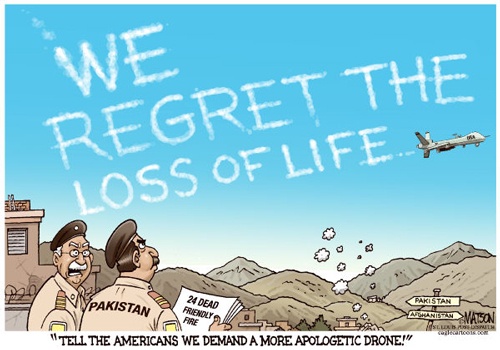 Being an ally of the US does not mean you are protected. I wonder what percentage of allied deaths are caused by terrorists or enemies of the state compared to supposedly friendly fire. Would not surprise me if friendly fire was more likely higher in some cases. No different in the US as you are more likely to die at the hands of police than terrorists.

sam_koll
Reply to  Russell A Wilson

With friends like the US you already have more enemies than you can handle.