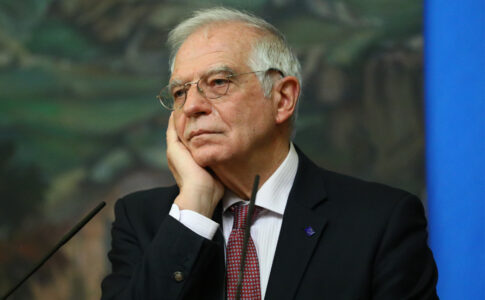 Josep Borrell’s plan to construct new transportation corridors between the European Union and Central Asia, which will bypass Russia, will be difficult to achieve due to issues of geography. The EU is already economically suffering because of their refusal to deal with Russia and it can be expected that any corridors bypassing the Eurasian Giant will also face the same issues.

The only other feasible route for an EU-Central Asia corridor is from Greece and Turkey or the Black Sea to the Caucasus and then the Caspian Sea. However, given the immense tensions between NATO allies Greece and Turkey, and the actual conflict between Armenia and Azerbaijan, this is a region of instability. This also does not take into account other conflicts on the periphery, such as Syria and Iraq, and the decades-long Kurdish struggle for independence. Such destabilisation creates logistical issues.

Borrell visited the Uzbek city of Samarkand on November 17 and 18 to participate in the “EU-Central Asia Connectivity Conference: Global Gateway”. There, he discussed regional partnerships and cooperation between the EU and Central Asia.

The main interest the High Representative of the European Union for Foreign Affairs and Security Policy has in Central Asia, specifically Kazakhstan, Uzbekistan and Turkmenistan, are natural resources. Along with the resources, European companies also want access to new markets. Just as importantly though, Borrell hopes that these countries will move away from their traditional relations with Russia and bring them closer to the EU.

Although these countries will certainly be enthusiastic to engage more with the EU, it will not and cannot come at the expense of relations with Moscow, just as it will be impossible to completely exclude Russia from the effective and efficient delivery of goods between the European Union and Central Asia.

The attempt to completely break from Moscow will cost Europe even more dearly than the current sanctions as attempting to bypass Russia as part of transport logistics will lead to higher prices of goods.

Borrell admitted that the EU’s plan includes exploiting Central Asia’s enormous potential, which is reflected in the supply of energy, the supply of critical raw materials and new transport corridors that are independent of Russia. At the same time, the European head of diplomacy specified that Russia and China still play an important role in Central Asia, however, according to him, the countries of this region want to diversify trade and economic relations and therefore consider the EU as a suitable partner.

At the moment, certain shipments of raw materials, rare earth metals and fertilisers arrive in Europe from Central Asia, but not in the quantities that is needed. Notably, a lot of these products arrive in Europe having been transported via Russia. It is for this reason that the exclusion of Russia from this supply chain, and particularly from a geographical point of view, is very hard to do.

The most feasible route that does not include Russia is from Kazakhstan and Turkmenistan to Azerbaijan, Georgia, and eventually to Turkey and Greece or directly across the Black Sea to Romania and Bulgaria. However, a lot of time and resources are needed to realise that plan, something certainly not feasible in the short to medium term.

It is recalled that the EU previously tried to create a trans-Eurasian land bridge across Turkey and the South Caucasus to China, but this project proved to be economically ineffective as all transport corridor projects bypassing Russia are full of significant geographical and logistical barriers.

Nevertheless, Brussels will not give up active attempts to implement the transport corridor project to Central Asia which bypasses Russia, especially considering the current geopolitical situation and their blind support for Ukraine. The EU has already demonstrated that it will not backtrack from self-destructive anti-Moscow sanctions and will instead deepen their economic woes by imposing further sanctions.

Therefore, it cannot be considered surprising if the EU does go ahead in building corridors that will ramp up product prices because the delivery bypassed Russia.

It is beyond doubt that Central Asian countries may be interested in diversifying their economic partners and may consider alternatives, but they will not give up their cooperation with Russia. In fact, it is more likely that Central Asia will draw away from the EU if there are insistences that certain policies and values must be implemented, including the lessening of cooperation and relations with Russia.

Borrell the child molester and a pathetic Spanard, who loves to take a big black cock up his arse.

A well schooled civilian soldier of the ruling cabal is perfectly willing to indulge in their fantasy as long as the money roles in.

Borrell is a poor dumb inferior. With the bad luck he has, he won’t live long, poor fellow.

I look at this face and I see a globalist elite groomer, only surpassed by his masters – who don’t like to be named.

People like Borrell, instead of working through economic problems with other countries, would rather bully those countries into giving tribute and if that doesn’t work they will just come and take what they want. That’s seems to be the extent of american foreign policy…until now.

The US and its nato poodles are all for declaring war when they are facing tribesmen in sandals or Saddam’s tinpot army, yet when it comes to a real army they are quiet and hide behind their ‘plausible deniability’ excuse. Let’s hope that the ICC will one day see through that excuse and do its job for once.

I wonder what business this Borrell wants to do in central Asia? Those are all tiny agricultural economies with hardly any natural resources. Kazakhstan has sour gas and Turkmenistan has some gas but enough for its own use pretty much. The rest of them don’t even have that. They are just poor countries surviving on agriculture and sheep farming. No wonder nobody is doing diddly over there for the last 100 years now.

The only problem with this is that now that Russia knows the consequence of its inaction in Maidan in 2014, it won’t make the same mistake twice. We saw that in Kazakhstan when Russia sent thousands of military to help the local forces keep the order. But, good luck. I’m sure Borrell and his ilk, stupid and Russophrenic as they are will surely try.

CA has been for most part peaceful, one reason is thanks to Russia not letting the US and EU start fuking around.

Does anybody remember, before the Maidan, how the EU were involved in the Nabucca Pipeline (Turkey to Austria), which failed, primarily owing to EU involvement. Then when The Maidan went down, I was reading various EU Neighbourhood Agreements, including the Ukraine Neighbourhood Agreement, where they demanded the Gas Princess Tymoshenko was released from prison. The rest is history. Why on earth would the CSTO nations be interested in anything the EU has to offer? Plus, for the EU to open corridors in the nations that border the Caspian Sea, don’t they have very strict guidelines, where outsiders are concerned?