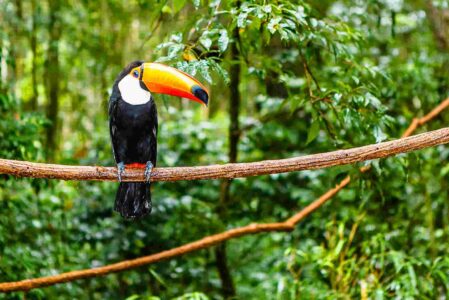 Washington’s and the EU’s narratives on the environment, however, are marked with contradictions.

During his visit to Colombia on October 22, US Secretary of State Antony Blinken announced the US was to soon launch an Amazon-wide pact to reduce deforestation. Strangely, no mention was made of Brazil being included in this conversation. Blinken even declined to answer a question regarding Brazilian President Jair Bolsonaro’s deforestation record. Three days earlier Bolsonaro and his Colombian counterpart Ivan Duque said they would head to the next UN climate summit “united” in defense of the Amazon rainforest. In the COP26, in Glasgow, over 100 countries, including Brazil, and the US, vowed to end deforestation by 2030.

During the March 2020 American presidential debate, Biden proposed “organising the hemisphere and the world” to provide $20 billion to protect the Amazon forest. This was stated in the context of trying to make an effort for Brazil no longer “to burn the Amazon”, thus singling out this country as the bad guy in the region. The plan Biden detailed in Glasgow last week to contribute billions to support the conservation of forests both in Amazonia and in the Congo Basin is in keeping with his campaign promises. Deforestation has been on the rise in the Congo and in Southeast Asians in recent years. It is an international problem, with a global rate of deforestation – between 2015 and 2020 – estimated at 10 million hectares per year, which is roughly the size of South Korea, according to data produced by the White House.

The Amazon jungle or Amazonia is a region that encompasses territory belonging to 9 countries. 60% of it is within Brazil, followed by Peru (13%), and Colombia (10%). Minor parts of it are within Ecuador, Bolivia, French Guiana (a part of France), Guyana, Suriname, and Venezuela. Contrary to what is often stated, the Amazonia does not really produce 20% of the planet’s oxygen and thus it is not really the “lungs of the Earth”. However, it is of course very important for the entire globe: it does make a huge contribution to pulling CO2 out of our atmosphere, it significantly mitigates climate change by cooling the planet,  and it also stabilizes rainfall cycles in the continent, besides being home to the most biodiverse ecosystem on Earth.

Even though this is rarely discussed, French Guiana’s own plans for soy-fired biofuel power plants are a major environmental threat to Amazonia, and French President Emmanuel Macron has been pushing for policy changes that would make such plans more feasible, thus deviating from European Union’s own sustainability standards – French Guiana is an overseas department of France and as such is part of the European Union. Gold mining there too plays a serious role in the Amazon’s deforestation and also on mercury concentrations in water, according to a 2019 study from the French Geological Survey. All of this makes Macron’s more aggressive statements on the issue of Brazilian deforestation (calling for international intervention etc) sound somewhat hypocritical.

As mentioned, there has clearly been a change of tone in the Brazilian government. Such public declarations by authorities in Brasilia are still regarded by many with skepticism, however. For one thing, the country still lacks a credible operational plan pertaining to the issue.

Be it as it may, Bolsonaro has been an eager US ally but so far has not gained much in return, be it under former President Trump administration or under Biden. The latter actually defended sanctions against Brazil during the US presidential campaign. Even with Bolsonaro’s change of tone and even with a hypothetical concrete change in policies and measures, he could still be excluded from talks on the rainforest, even though most of it is located in Brazilian territory. This would mark a further international isolation of Brazil and could be perceived by many voices within this country as a threat to its sovereignty and territorial integrity. The issue of the territorial sovereignty of the Brazilian jungle is still a delicate issue amongst the military and is part of Brazilian nationalist discourse – both in the Left and in the Right.

Whenever one talks about deforestation, to put things into perspective, it should also be noted that the Colombian Amazon has lost (mostly to cattle farming) a rainforest area larger than the Country Of Wales. Deforestation there increased 8% last year, according to data from the Colombian Environment Ministry. According to the US’s Environmental Investigation Agency, the cattle population in the rainforest area has grown at least three-fold since 2016 – this coincides with the peace deal agreed by the Colombian government and the guerrilla group known as the FARC (Spanish acronym for Revolutionary Armed Forces of Colombia). Some analysts have even described this escalation as the price of peace.

Basically, Colombian loggers have been opportunistically entering territories where the FARC rebels used to keep them away and these are becoming sites for illegal mining, cattle ranching, and also road infrastructure projects that are part of the national Plan Pacifico. This plan is aimed at extracting natural resources from the jungle for exportation, thus raising revenue and developing the Colombian economy. All of this has tremendous environmental impacts, Colombia being the second most biodiverse country on Earth, after Brazil. And this too is rarely mentioned.

Brazil is the major deforestation actor in the region, not only due to most of the rainforest being within its territory but also due to its record of bad environmental enforcement and due to powerful interests – and it has indeed worsened dramatically under Bolsonaro – but the Colombian authorities in Bogotá are far from being saints in this regard.

The truth is that the focus the US places on Colombia as a reliable partner regarding the environment has more to do with their record of military partnership than with real environmental concerns. The same goes for human rights concerns, by the way – Colombia has been, since 2018, a global partner of NATO, after all. Bogota and Washington have both been leading efforts to remove the Venezuelan president Nicolás Maduro from office. However eagerly pro-US Bolsonaro may be, he is perceived as unstable and unpredictable, and Colombia is a more reliable partner, from Washington’s perspective.

Brazil however was in 2020 the eighth largest economy in the world by purchasing power parity, and the largest economy in Latin America. Its territory makes it the  world’s fifth-largest country by area. Thus, it is a force to be reckoned with, so to speak, and globally isolating it is simply not feasible. If Bolsonaro is re-elected in next year’s presidential run, the US and the EU will have no choice but to further engage with him on a number of issues, even if sanctions are applied. He, on his turn, will need to make progress in terms of diplomatic work and the environmental agenda, so as to secure the badly needed Brazilian soybean exports to China and to the EU at a time when international trade guidelines and tariffs are also part of a geopolitical game.

One more article that has a biased tone against Brasilian government, since academics in Brasil are part of the far left politic field.

The US Secretary Blinkem exclude Brasil from this conversation because the first question that Brasil would make to the US secretary is to ask the USA Biden government to PAY THE 20 BILLION dollars that Biden promised to Brasil in his bid for US election in 2020.

Brasil is ready with hundreds of conservation parks and projetcs to use those 20 billions dollars to protect the Amazon biome.

But Biden never intended to pay those 20 billion dollars, because that would make Bolsonaro President even stronger in Brailian politics. and would make

So Biden would never give Brasil the 20 billion dollars, even more if it would made Brasil stronger and more developed with a conservative Pollitician.

To those who may think that Bolsonaro is “far” right because he is a conservative, person, remenber that

Vladimir Putin of Russia is also a Conservative since Vladimir Putin wants to Preserve the family in Rússia, wants to preserve the economy development in Russia to Benefit Russians and not the international Globalists

This channel should rethink their view of Brasilian Left Globalists, because the left in Brasil is subordinnated to European Globalists….