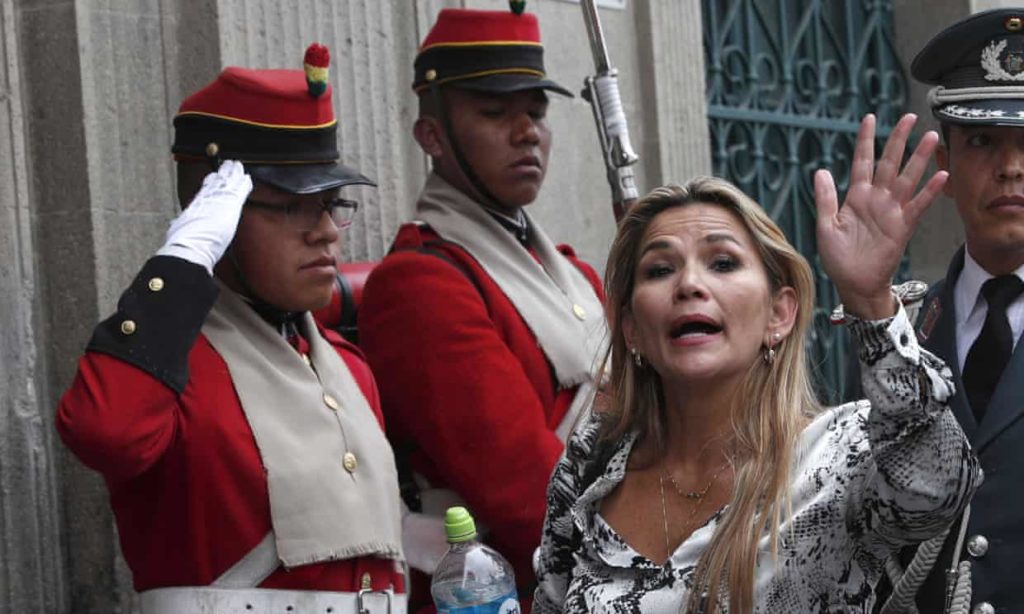 Bolivian Foreign Minister Karen Longaric announced the country’s withdrawal from the Bolivarian Alliance for the Peoples of Our America (ALBA), a day after the organization condemned of the coup in the country.

On November 15, the post-coup regime announced that Bolivia leaves the ALBA and intends to withdraw from the Union of South American Nations (UNASUR). The announcement was made by Karen Longaric, Bolivian Minister of Foreign Affairs appointed by the new Acting President, Jeanine Anez.

“We have withdrawn from alba and are planning to leave unasur,” Longaric said.

The new government also removed the Bolivian representative to the United Nations Sacha Llorenti, ambassador to Cuba Ariana Campero, and 80% of Bolivia’s ambassadors appointed at the time of Evo Morales. Longaric claimed that the appointed persons are not career diplomats, but political agents of Evo Morales and the Movement to Socialism. This is a common rhetoric for all regimes that took power during some kind of a coup.

On November 14, the Foreign Ministers and Heads of Delegation of the ALBA member countries met in Nicaragua’s Managua for an extraordinary meeting of the political council during which they condemned the “coup d’etat against the legitimate President of Bolivia, Evo Morales”. Diego Pary, Minister of Foreign Affairs in the government of Evo Morales, who refused to resign after the coup, participated in the meeting.

At the same time, the Bolivian Parliament, by a majority vote, and with a quorum, elected the new head of the lower house, Sergio Choke. Like Morales, Choke is a representative of the indigenous peoples of Bolivia, who make up the majority of the population.The head of the lower house declared that Evo Morales is the constitutional president of the country, after which he issued a decree requiring the army to leave the streets of Bolivian cities and return to the barracks.

Bolivian President Evo Morales, along with his vice-president and leaders of both houses of parliament, announced their resignation on November 10 as a result of the violent coup staged by the opposition backed by the US and its regional allies.

Riots began after the October 20 presidential election won by Morales under a pretext that Morales achieved his victory using the fraud. No evidence was provided, but the Western propaganda machine and local radicals turned the country into a state of chaos.

The former President left for Mexico, which granted him political asylum. On November 13, Second Deputy Speaker Jeanine Anez declared herself the acting President. Supporters of Morales took the streets to defend the democratically-elected president. However, the new government immediately used the army to suppress them.

Additionally, the new government started a quick review of the country’s priorities in the foreign and domestic policies. The opposition, backed by the global capital is aiming to reverse the gains of the socialist government of Morales that has achieved an economic breakthrough and overcome poverty over the past years. One of the main goals is to drop low taxes imposed on large companies, first of all the gas industry, and go forward with the lithium deposits developing project rejected by Morales (The region has 50% to 70% of the world’s lithium reserves in the Salar de Uyuni salt flats).

The post-coup government is racing to rescue interests of international corporations in Bolivia and defend interests of its new best friend, the United States.

People are with Morales, that is very clear. Saying so, qnd because of that many very nasty things can happen.

Morales lost some support going for a fourth term in office. The people voted against this in a referendum that he put forward, but it was overturned by the Judiciary branch of govt. so he was allowed to run for office again. This goes against their constitution. He will not be running in the next election, so looks like Carlos Mesa will be the next president of Bolivia.

Look at who wasn’t happy with the outcome of the election:

“The two Bolivian security forces heads who ‘suggested’ Morales resign – police chief Vladimir Calderon and Commander of the Bolivian Armed Forces Williams Kaliman – were also graduates of the infamous School of the Americas and served as police and military attaches in the US in recent years.”

“On November 28th, Bolivia’s Plurinational Constitutional Tribunal ruled that all elected officials could run for office indefinitely, rather than for the two consecutive terms permitted under the 2009 Constitution. The ruling will end term limits for the president, vice president, state governors, state assembly members, mayors, and municipal councilors.”

The referendum of 2016 vote was against a change to the 2009 constitution, so it can not be ruled unconstitutional. It was a down vote, not an up vote.

Constitutions in Bolivia change like the seasons. That’s what a constitutional court is for.

“Bolivian elections are conducted under an “act of good governance,” which prohibits electoral propaganda in the days before an election”

“The court has annulled the result of a referendum held last year, in which a majority of Bolivians rejected his proposal to change the constitution.

It said Mr Morales had lost the vote by a narrow margin because of an illegal defamatory campaign.”

Don’t tell me, with President Morales the army did not intervene against the ravages of the opposition, now that there’s this Nazi they use all violence against defenseless people.

I don’t know why Morales would allow graduates of the school of the Americas in the US to head the police and military who then betrayed him.

This story makes one wonder. https://www.miamiherald.com/latest-news/article237353769.html

You’re turning into a drive by spammer like some of the other mental midgets here afraid to debate the issues because they know that they’l lose.

This s not going well.

“Riots began after the October 20 presidential election won by Morales under a pretext that Morales achieved his victory using the fraud. No evidence was provided, but the Western propaganda machine and local radicals turned the country into a state of chaos.”

This is not completely true.

yes the amerikans installed a blonde nazi as president in a nation dominated by Aymara, Quechua and Guarani….if Morales had purged the military and police of these fascists, such a coup would not have been possible

Yup, there are times, where one have to not admire the blatant scumbags attacks on free nations, and their open rape and plundering of others, like Bolivia, where the Western MSM and Gov incl nations like Norway whom echones CNN as the ephifany of truth so help us God, uh…. the Yankike God, witch is Guns, Oil and Drugs, aka GOD, and the way they always protrays the gov witch holds the powers to any given time and to where ever the scums of this earth wants to harvest the recourses, as Dicks, of course, our Dicks is something else, since they are ours, right Norway, and EU. Fasinating times indeed, and do notise the pathetic f…. Russians whom is doing nothing but butt cheek spreading infront of the scums of this earth, yeah, sorry, but its noting personal, its just bizzenizze, right Ruskies.

This is an must read, tells all you need to know and belive me, you will never see this on the MSM.

Nice UssA bitch, an genuine scumbags, the only difference, the dick is inverted an she is an real psychopath.

I couldnt link it from Russia Ins ( the ultimate ass wipper, and my favorite when it comes to crashing propaganda, few are those that can match RI, and my humble adivice is, be meaner, hehe) since people is uable to handle an minimum of truth, most of the morons are de facto unable, it dont even matter what anyone comes up with regarding the deepth and scope of decades to centurys of idiot propaganda and flat out lies, coverups and cockups, even then, the sheeps chockes when they read something that contradicts their eh….. belif. I told you, truth hurts, if it dont hurt, its just because its not true enough or you are indeed blinded.

And since we are again up against an invasion army of drooling idiots, ignorants and propaganda wankers like the massive fleet of Units to Brigades and general Moronikans whom is so bran washed that conversing with anyone of them is as revealing as pissing against the wind, we have to do everything our selfs. And there are times I wounder how rotten can humans be, how deep can they sink, deprivated of humanity and morale, and the answer came riding into the arena in Bolivia, in the disquice of an so called Woman, yup, and then we have the rest, foundly educated in the School of American, yeah, and somehow the western MSM dont even bother to write anything about whom this peoples are, instead they just continue with articles from where their payed whores yapps the agenda about how grusome Morales was, yeah, even an socialist, oh… the horror. and by the way, Teslas stocks got an spike upward, nice, and hey, look an squirel is plaing an organ, yeah, sweeeeet.

BOYCOT the Terror state UssA ( the Union of Socoipaths, Scumbags and Assh…..)

“……Morales was, yeah, even an socialist, oh….the horror………” and other gems. You made my day. Thanks for writing.

The reality of the present situation in Bolivia is that we see ‘a successful Fascist coup’ on the one hand while Democracy raises IT’S Powerful Banner in Parliament. A parliament that supports Morales with the support of the majority of the People. This looks like a Chile 2.0 without the murder of the President. Seems Yanki Fascists will no longer allow “their peons” to improve their lot at their expense. The coup organisers led by Anez.with the full support of the Yanki trained officer Corps of the Army might not be as solidl as the fascist coup leaders think. Morales has stated clearly he will return and that this was a Yanki staged Coup. Expect both sides will get down to organising their forces over the coming days for the subsequent struggle for power. Yanki Fascists have fucked up on their last number of coup attempts. This might very well underline in no uncertain terms that the Yanki Empire is collapsing at a greater pace than expected. Unfortunately, Russia was a bit too quick to recognise this self declared skirt wearing Fascist monster as President. Hopefully, as events unfold they will rescind their decision.

It is nothing short of heartbreaking to see the first indigenous leader of Bolivia going.

History will never forgive the shady forces behind the current political and social turmoil in Bolivia.