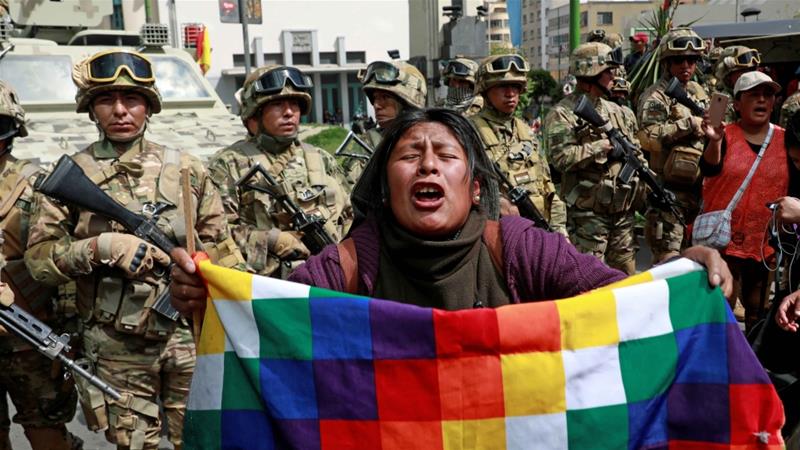 The post-coup government is not shy to use force against supporters of Bolivia’s ousted president Evo Morales.

On November 16, officials reported at least 8 civilians were killed and dozens others were injured when police loyal to the post-coup government of Bolivia opened fire at pro-Morales rallies. The deadliest incident happened in Sacaba, near the city of Cochabamba.

Morales, who was granted asylum in Mexico after his November 10 resignation, described the development as a “massacre” and said that the interim government led by Jeanine Áñez is a dictatorship.

In an interview with al-Jazeera, Morales said he should be allowed to return to Bolivia and complete his final term in office.

“I can’t be outside of the country. I’m used to being with the people as a union leader, president, doing work,” Morales said.

“I miss it (Bolivia) a lot. I’m looking for a legal way to go back and be with the people as they resist the dictatorship, the coup.”

A violence is increasing across Bolivia. Some local media and activists have started describing the ongoing developments as a kind of “civili war”. As many previous “civil wars”, this is slowly erupting from the illegal coup against the democratically-elected government.

Meanwhile, the post-coup government has started a rapid revision of the country’s foreign and domestic policies. On November 15, the post-coup regime announced that Bolivia leaves the Bolivarian Alliance for the Peoples of Our America (ALBA) and removed from posts around 80% of ambassadors to other countries. In the domestic policy, the new government strongly supports international corporations that has suffered a series of setbacks in the country during the Morales term.

Morales should be allowed to run in new elections. Let the peoples voices be heard.

Do you really think it would happen?

Morales made a big mistake in not purging the senior ranks of the armed forces like Chavez did. He should have put put in his own people loyal to him. He was in power for over a decade so had plenty of time to get this done.

Beside he did not have a strong and armed militia like Venezuela…so it was a matter of time that USA finally bribed the military staff to steal the Lithium!..Morales was naive!

klove and light
Reply to  Rhodium 10

NAIVE…….. that is spot on…..a good man with good and handsome ideas who was and is to naive to tackle the pure Evil…..

Post-coup? What is that, SouthFront?

He tried to “legalize” the fourth term in a referendum, but people voted “no”. Then, he said the referendum was not valid (!) and, to ensure power, did a fraud in the election, but people took the streets against him. Evo Morales ordered the police to attack the people, but police officers said “no”. Then he ordered the army to attack the people, and the army said “no”. Then he left the power and country to do not face the consequences for his crimes.

And you are calling this “coup”?!

No evidence of fraud in the election has been presented. Although the constitution only allowed 2 terms the Supreme court of Bolivia declared that to be invalid so he could legally stand again. You say this is not a coup but why are they shooting protesters then!

I think the choice to run again was unwise and a worrying symptom of a difficulty in finding a replacement with the same human or political qualities of Morales (same as in Russia with Putin), but on the election fraud issue, you are mostly right.

Right now we have two different statistical analysis that show that the election result doesn’t appear to have been significantly altered by frauds. The only point of contention is if Morales actually won by a 10% margin, which was needed to avoid a second turn.

I think Morales made a mistake with the referendum asking the public can he run again which they rejected. He should have stepped aside then.

The referendum was 51 vs 49% A very slim margin indeed.

You are wrong on many facts. And legally this would be his third term in office, not fourth. “On November 28th, Bolivia’s Plurinational Constitutional Tribunal ruled that all elected officials could run for office indefinitely, rather than for the two consecutive terms permitted under the 2009 Constitution. The ruling will end term limits for the president, vice president, state governors, state assembly members, mayors, and municipal councilors.” – Bolivia Says Goodbye to Term Limits – https://nacla.org/news/2017…

klove and light
Reply to  Sukhoi

you have a Point there that cannot be denied….then again….as you well know….Morales was a “anti-corporation” dude….trying to do GOOD for BOLIVIA and not having intl´corporations plunder the riches of his Country….and as u well know there are HUNDREDS of examples world wide..best would probably be Iran and the rule of the Shah and the anglo-american Theft of the oil and gas riches of Iran during that time…or take Venezuela or syria Right now….the list is endless….

so yes….u havew your Point, and i would say it was not the smartest move by Morales to run HIMSELF again and against the constitution…..

For U.S supported unconstitutional coup leader, killing own unarmed civilian is legal. But for Hong Kong police to react against armed and have committed murder and causing grievous hurt and arson with fire ARE ILLEGAL. Such as American democracy..how shamefull