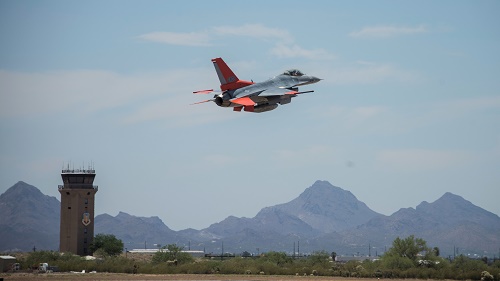 On July 31st, 2020, Boeing announced that it had completed the first full conversion of a F-16 fighter jet into a QF-16 aerial target drone.

The 309th Aerospace Maintenance and Regeneration Group (AMARG) located at Davis-Monthan AFB in Tucson teamed with Boeing under a public-private partnership to create a second modification line to supplement ongoing QF-16 work at Boeing’s Cecil Field site in Jacksonville, Florida.

“The delivery of this first AMARG modified QF-16 aerial target drone is a testimony of the cooperative, synergistic relationship we had hoped for when we created the private-public partnership with Boeing,” said Col. Jennifer Barnard, Commander of the 309th AMARG. “Though the installation of the drone conversion package is a relatively new venture for us, our hope is to leverage cost efficiencies and proficiencies benefiting both partners.”

Conversion of the F-16 A/C aircraft to the unmanned QF-16 configuration requires modification of the airframe and installation of major components. The QF-16 performs both autonomous maneuvers through autopilot and controlled maneuvers through ground stations.

“The partnership between Boeing and AMARG is crucial to expediting capability to the warfighters,” said Craig DeMeester, Boeing QF-16 programme manager. “It’s an example of great teamwork, and completing this first jet is just the beginning as we have more deliveries planned this year and well into next year.”

Learn more about how we partner with the @USAirForce to help pilots train with #QF16.

The F-16 entered service with the U.S. Air Force in 1980, and over the past forty years has served in various conflicts around the globe. The Air Force purchased the F-16 over the course of at least two decades, and some planes are older than others.

The oldest of the planes end up at “The Boneyard” at Davis Monthan Air Force Base, Arizona. There, the heat and dry air keep old planes in good condition while the services figure out what to do with them.

In 2010, the Air Force began converting F-16s to QF-16s (Q standing for drone). According to Wired, this year 32 of the drones were pulled from Davis Monthan and modified using a Boeing-designed Drone Peculiar Equipment kit.

The F-16 is relatively easy to transform into a drone because, instead of older aircraft such as the F-4 Phantom, the F-16 was a fly-by-wire aircraft in which onboard computers translate the pilot’s commands into action.

The kit allows the drone to take off and land, and perform fairly complicated aerial maneuvers. Typically the drones don’t land, however, because they’re shot down. The QF-16s are used as target practice by manned fighters launching air-to-air missiles.

The Air Force’s “Skyborg” AI software, meant to act as an R2-D2 to a pilot in a manned airplane or a computer wingman in a separate, unmanned aircraft, could also be adapted to the QF-16, turning it into a weapon-carrying wingman for a F-22 or F-35 fighter.

F-18 and carriers next

Thats funny because I saw these 10 years ago.

Together with the Russian base on the Moon?

How many US flags are on the Moon?

No robots on Mars either?

And you use them to spread your butt while bend over?

Never even built a supersonic passenger jet on merit,you honestly believe cia scam? Not anymore,the world has awakened for the betterment of mankind,fk the bullsht/hollywood variant!

There are still 5-6 US flags on thw Moon.

They are both on Mars too. Secret Space Program. For more details read Corey Goode!