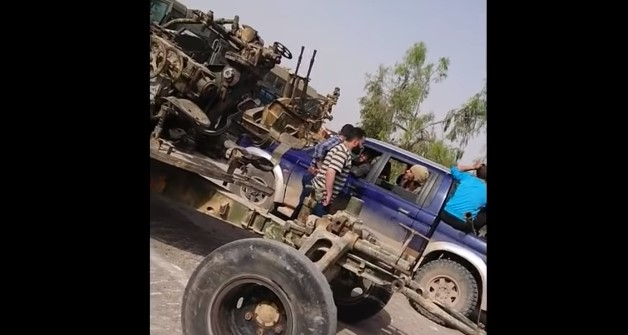 The Russian pro-government media outlet Rusvesna has released a body camera video showing the moment when Rastan pocket militants were surrendering their weapons and equipment to the Syrian Army and the Russian Military Police.

On May 2, militants in the Rastan Pocket in northern Homs and the Syrian government reached a reconciliation agreement. Under the agreement:

In mid May, the Syrian Army and its alllies established a full control of the Rastan area, which includes the town of Rastan and over 60 other settlements.

Over 31,000 militants and their relatives withdrew from these settlements in the framework of the reached agreement, according to the Syrian Observatory for Human Rights.

Great audio. I want that quality for my ET/ED contact videos. I’m going to try to go with a body cam with more of a rectangular field of view.

These “Former” Headchopper Militants come up with an Whole Army of Equipement…wtf…and Russian Soldiers just smoking a cigarette having a chat here & there….now imagine folks surrendering to the U.S. Army in a similair situation… they would have Created a “Highway of Death” just as a pre-emptive measure… https://uploads.disquscdn.com/images/418b27fa5fee6a4b9a09dd4b07b9c9e4293dccdc1f09f00ea5c0c6e2e4519121.jpg https://uploads.disquscdn.com/images/a6a8c1c9d1f02b6a2ca3678db1accf4af3c25c1e70ccc12c2664f352592de9ea.jpg

Russians do things differently from the zionist psychos – the highway of death created even more chaos for the empire. Russia is not interested in war but using power to project a direction toward peace.

They way they treat these P.O.W.s Looks good….although there must be Folks in the movie who deserve to be summary Executed on the spot….