A photograph of the meeting between Mnuchin and the Crown Prince was posted on Twitter by the Saudi foreign ministry. The tweet also included a comment that the MBS stressed “the importance of Saudi-US strategic partnership, where it holds an important role in the future in line with the Kingdom’s #Vision2030.”

The Saudi Arabia Vision 2030 is long-term development plan with the aim of reducing the Kingdom’s dependence on oil revenues and diversify its fossil-fuel-driven economy.

Mnuchin’s visit to Riyadh during his trip to six countries in the Middle East come as he announced he would not attend a high-profile investor conference. He joined other government officials from multiple countries as well as top banking and finance executives who also bowed out of the event due to the Saudi misconduct. Mnuchin, who earlier confirmed his visit to Riyadh as part of the Middle East tour, has neither issued any comment on his talks with bin Salman, nor released a photo of the meeting. The Treasury released photos of meetings with Israeli and Jordanian leaders.

On October 22nd, US President Donald Trump said he remained unsatisfied with the Saudi explanation, however despite pressure from within the US and outside of it, he reiterated that he doesn’t wish to suspend relations and specifically arms sales between the countries. According to the RT, if Trump succumbs to the pressure, which has only increased since Saudi Arabia admitted to Jamal’s death, that would mean a halting to $450 billion in arms sales to the Kingdom.

The meeting between Mnuchin and MBS shows the US seemingly unending support for Saudi Arabia and sparked outrage on Twitter.

Sad day for America—a seeming sell out & business as usual in Mnuchin meeting with suspect Saudi Crown Prince. Apparent seal of approval before the facts are known about MBS’s complicity in Khashoggi murder. Are we now just a pawn in Saudi propaganda? https://t.co/aBiMdkGtOP

MBS wins another round against Trump, who just doesn't care if a country kills a US journalist: "Mnuchin meets with Saudi Crown Prince Mohammed bin Salman despite outcry over government’s role in journalist’s death" https://t.co/RAzytwNvv5

Reuters also cited anonymous sources who claimed that the Kingdom is to sign $50 billion in oil, gas and infrastructure deals during the high-profile investor conference also known as Davos in the Desert. The deals will be signed with companies including Trafigura, Total, Hyundai, Norinco, Schlumberger, Halliburton and Baker Hughes, the source said.

“The deals will include the establishment of a copper, zinc and lead smelter with Trafigura Group; a joint agreement to build an integrated petrochemical complex and downstream park in the second phase of the SATORP refinery, jointly held by Saudi Arabia’s Aramco and Total; and investments in retail gas stations also by Aramco and Total.”

As of now, Germany is the only country that has suspended its arms exports to Saudi Arabia in connection to the Khashoggi murder. The three biggest arms sellers to the Kingdom – the US, the UK and France, are yet to undertake any actions apart from a strong rhetoric, mostly by officials who have no executive power.

On October 23rd, Turkish President Recep Taiyyp Erdogan is to hold a press conference, announcing all the details that Turkish authorities have discovered surrounding the disappearance and murder of Jamal Khashoggi. It is yet to be seen, however, if further evidence would prompt parties to value human rights and life higher than investment.

Britain is now the second biggest arms dealer in the world, official government figures show – with most of the weapons fueling deadly conflicts in the Middle East. Since 2010 Britain has also sold arms to 39 of the 51 countries ranked “not free” on the Freedom House “Freedom in the world” report, and 22 of the 30 countries on the UK Government’s own human rights watch list.

A full two-thirds of UK weapons over this period were sold to Middle Eastern countries, where instability has fed into increased risk of terror threats to Britain and across the West.

Sorry mate, but I disagree. The UK are not the second biggest arms dealer in the world; Russia is. 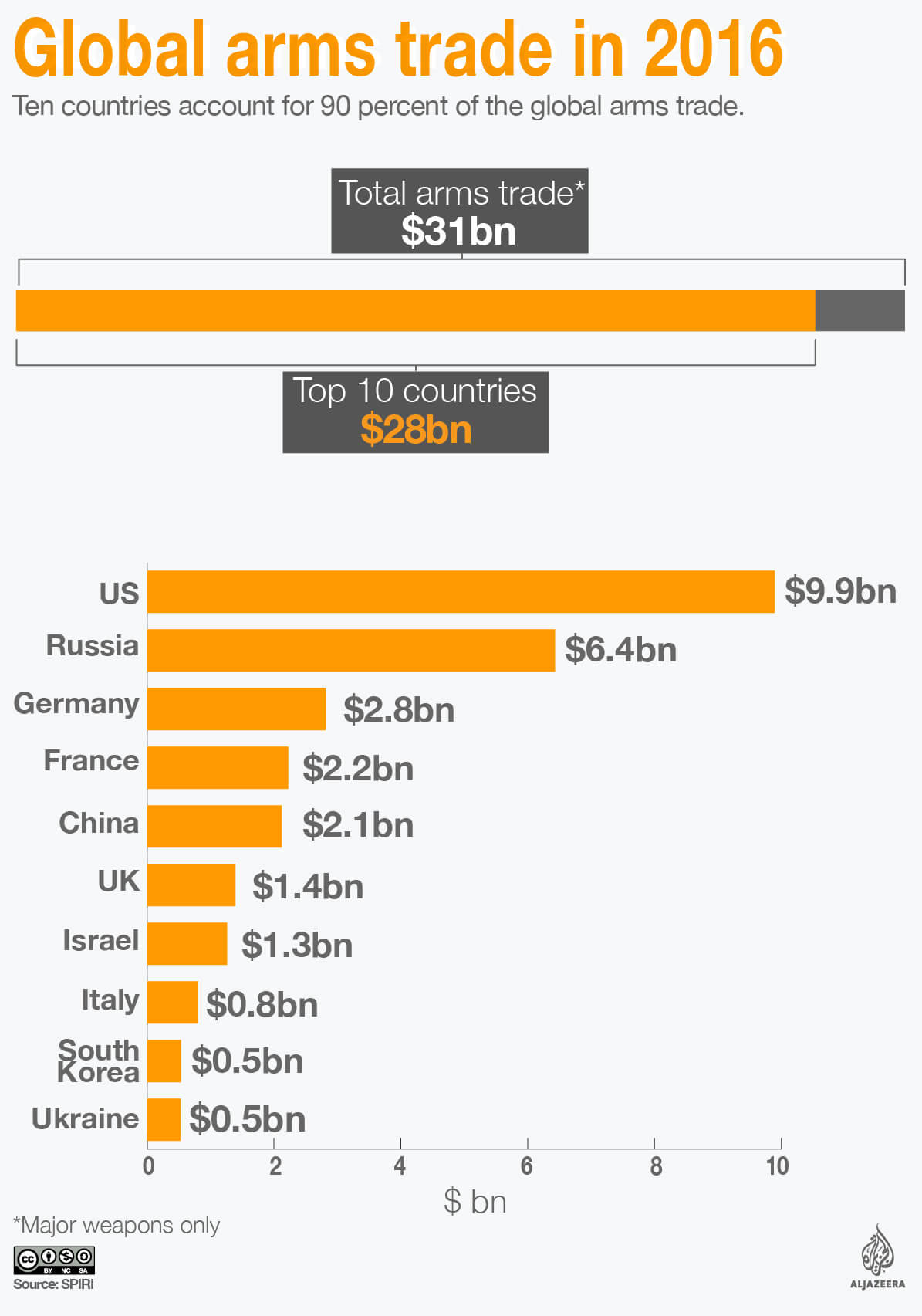 this is what I been thinking and know but then I read this https://www.independent.co.uk/news/uk/home-news/britain-is-now-the-second-biggest-arms-dealer-in-the-world-a7225351.html

I think they mean in the countries they discussing to maybe.

It rather depends on how define the business models from the ‘exporter state’ – for example British based BAE Systems is a British based company, known for enormous domestic political patronage, but also has subsidiary divisions all over the west and middle east. Are those foriegn divisions, and their activities in foriegn territories, subject to being quantitatively termed ‘British exports’?

When it comes to their corporations’ making money, human rights violations and/or genocide (yemen) is no issue for superpowers.

”Germany is the only country that has suspended its arms exports to Saudi Arabia in connection to the Khashoggi murder.” –> if Germany were so sensitive, why sell arms when KSA and US committing genocide in Yemen over 2 years now. (I am not even starting abt US/UK/FR).

Hypocrisy…. from those who teach human rights, democracy to the world!

Germany has supplied two nuke-capable subs FOR FREE to terrorist israel, theoretically enabling them to have ‘second strike’ nuke capability. Let’s not forget the hypocrisy of the German gov!

The German gov are cucks for Israel just like the US

merkel is a jew

yes I was havşng similar feelings towards them. journalist triggering their high values is just a show off.

Perhaps they were looking for an excuse to stop – and Saudi gave them one.

doubt but hope so

Human rights is ALSO a profit logaritm from Wall Street. Then we have the sheeple with their raised finger.

In some cases : END OF LIVE SALES !

The vision 2030 thing is a massive BS program under the guise of saudi future…
… and not the future you think.
saudis don’t do manual work. It’s beneath them. The average saudi lays around eating/drinking/sleeping/beating/raping/fucking/killing people.

South Front in spite the fact that we agree in this case you’re still revealing strong opinions in this news article starting in the headline when you characterize the whole thing as blood money.
Unrelated, it seems that the Saudis are trying to diversify their economy because they feel that western dominance of the oil trade will cause them a big problems when the US finally turns on them.

It is hilarious how you seek to directly present your basic level troll-remarks at the publishers – delusion much?!

A lot of weapons being sold to the Saudis. And I’d be worried if it weren’t for the fact that the Saudis know jack shit on using and maintaining them. They’re just basically bribes so the West will continue to turn a blind eye to whatever shady crap the Saudis are up to.

On the downside the Saudis do know enough how to use their expensive toys to kill Yemeni civilians. But then again nobody seems to give a crap about them. Least of all the journalist class now shedding tears over this Kashoggi.