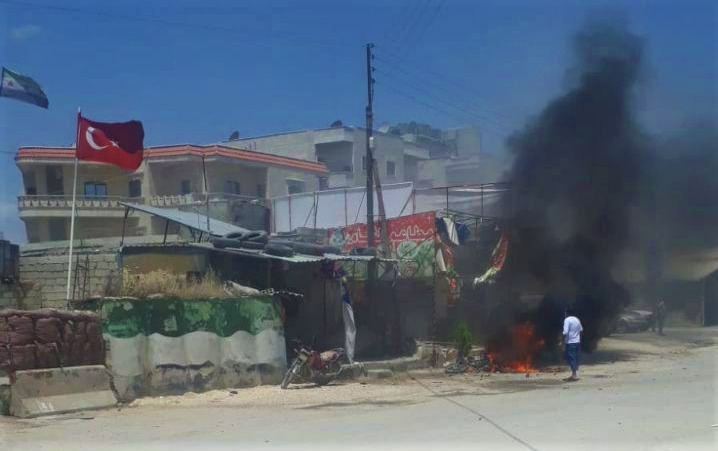 On May 28, a blast rocked the outskirts of Afrin city in the northern countryside of Syria’s Aleppo, which is occupied by the Turkish military and its proxies.

The blast, that was reportedly caused by a booby-trapped motorcycle, targeted a headquarters of the Turkish military’s Special Forces Command located on a road linking Alfin city center with the district of Jindires.

Three people were wounded as a result of the blast. Syrian opposition activists claimed that the wounded were all civilians. However, some of them may be Turkish service members or Turkish-backed militants.

The attack came amid reports of ongoing preparations by Turkish military and its proxies to launch a new large-scale operation against the Kurdish-led Syrian Democratic Forces in northern and northeastern Syria.

Kurdish forces were blamed for several similar attacks in Afrin and other Turkish-occupied Syrian areas in the past.

Nevertheless, this attack may have been orchestrated by ISIS cells as an act of revenge. According to recent reports, Turkish authorities detained the leader of the terrorist group, Abu al-Hassan al-Qurasyshi, during a raid in Istanbul earlier this month.

Despite the lack of security in the Syrian areas occupied by its forces, Turkey wants to occupy more of the war-torn country. In a recent speech, Turkish President Recep Tayyip Erdogan called these insecure, instable areas, where even his own soldiers are not safe, a “safe zone”.

ABEAST CAN ONLY GRUNT THAT WAY, UNHUMAN! BACK TO THE TROUGH!

… Or ISIL as well! The right return to betrayer ‘masters’ (the UNHUMAN GENOCIDALS)! MERDolfgan, enjoy, SHIT!

Behind you stand still now 💥💥💥

AS I SAID, SHITTING UNHUMAN BEAST

Any more ice cream like dick so you can lick .bagodo gavlegido 🖕😜

unhuman take it easy now. Go back to your cave and enjoy your Sunday have a good one

The US supports the Kurds and Turkey hates them. Why does Russia and syria not LET them at eachother, then finish the US and their Kurds off, then kick Turkey out? Russia and Syria should make a deal with Turkey to allow Erdo to get rid of the Kurds, then blast the US out as they will no longer have any terrorists to work for them, then tell Erdo he can leave now as he has dealt with the Kurd problem. If Iran attacks Israel, China goes for Taiwan and with the war in Ukraine, all we need is for Ireland to start to get radical.

Maybe some one got confused because it looks like a guys 125cc 1988 Yamaha caught fire! Not so much a Commando HQ getting rocked!