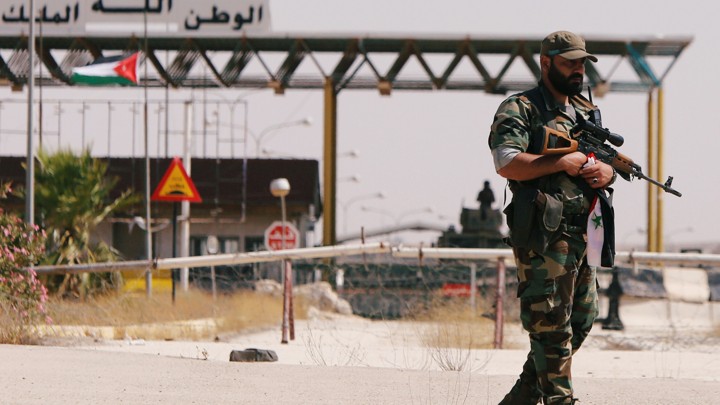 In the morning of November 20, a blast rocked the Syrian side of the Nassib border crossing between Syria and Jordan.

Brigadier Dirar al-Dandal, Daraa’s Police Chief, told Sputnik that the blast was caused by an improvised explosive device (IED) that had been planted near a security point in the crossing. Despite causing some damage, the blast didn’t result in any casualties.

“Whoever planted the IED, his goal was to cause the greatest number of deaths and damage, but the losses were only material,” the police chief said, stressing that day to day operations at the crossing were not affected by the attack.

Following the attack, Syrian security forces conducting a thorough combing operation inside and around the strategic border crossing.

Syria and Jordan reopened the Nassib border crossing in September. The step was the result of major improvement in the relations between the two Arab countries. The border crossing contributes significantly to the economy of both countries.

I am Gnostic Christian, are you nuts?

Assads for very good reasons has many enemies. Millions are not even in the country anymore.

It makes sense to reflect why instead being spendable tools for the SANAtorium.

Even ISIS is right in several things, which are not corrected in Syria as well. But You could take those parts and make them to Your own and take out the support and steam from them.

Its written “no side has clamed…”. Chris Gr says same thing.

I allow me to add, that Sputnik is no reliable source as well. Its written.

Prayers in Islam says so. But You most likely has been TOLD its written and Your faith and believes are not to trust.

And a lot of drugs also.