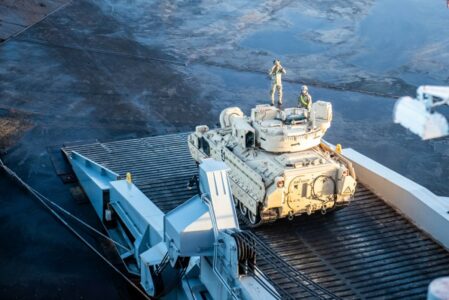 The US Army strengthens its presence in Central Europe. New troops have landed in Holland, Denmark and more reinforcements will arrive in the next few days in Riga, Lithuania.

The Usns Mendonca has docked in the Dutch port of Vlissingen and has delivered more than 1,200 vehicles and pieces of equipment, including M1 Abrams main battle tanks, Bradley infantry fighting vehicles and a range of wheeled vehicles belonging to the 2nd Armored Brigade Combat Team, 1st Calvary Division. The US Army has also sent a contingent of 500 soldiers from the 2nd Armored Brigade Combat Team: the unit is called the Black Jack Brigade and comes from the Fort Hood base in Texas.

In a few days soldiers and armored vehicles have set course for Poland and are now deployed at the Drawsko Pomorskie Training Area, Poland. 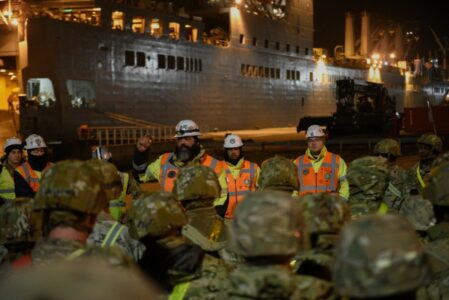 On January 16, however, the transport ship Arc Independence arrived in the Danish port of Aarhus with its cargo of around 600 pieces of military equipment. The two missions are part of Operation Atlantic Resolve, which aims to strengthen NATO’s eastern flank and increase the coalition’s military readiness, a program that has been going on since 2014 and has now been strengthened.

Again it is important to know where those troops and armored vehicles are headed. And also in this case the answer is Poland. Indeed, the transport ship arrived at Denmark’s largest commercial port in Aarhus city and included armored military vehicles is destined to be taken to Poland. The Danish landing shocked the local population: “We have never experienced receiving a military ship before. This is the first time that we have been chosen as a transit port for the US military. That’s why today is something special,” Daniel Moller Jensen , the port’s press spokesperson, told the media.

The official explanation of this mission is provided by Col. Todd Hook (1st Cavalry Division chief of staff). According to the US official these troops were sent from Fort Hood to begin their rotation in Europe in support of Operation Atlantic Resolve.

In reality, the current deployment of forces does not appear to be a routine operation. The movement of troops was announced in September by NATO chief Jens Stoltenberg who said that the alliance is building its presence in the eastern flank, putting hundreds of thousands of troops on high readiness. “We are significantly enhancing our presence in the east of the alliance, putting hundreds of thousands of troops on high readiness, supported with significant air and naval forces,” Stoltenberg told reporters then. The US build-up in eastern Europe has exponentially increased in the past year as western countries claim they are strengthening their deterrence posture facing Russia’s military.

Jens, will you volunteer when the war comes to Denmark?

I do by voting and pay tax for support. Thats my level.

But I could handle a joystick for drones.

Russians wont come to Denmark. We have confirmed the Russians hardly can reach Warshaw on bicycles even supported by fishing gear.

And we do support the new Nato border line having soldiers, tanks and radars there. Its assited by a F16 now and then too.

of course not. He is scared EU troll hiding in his basement

You just shut the fuck. Even jens is smarter than you, Islamophobic asshole.

Yeah, you’re right that this Bulgarian/Romanian whatever he is gypsy IS real-deal Islamophobic.

Once they arrive in Poland then they have to travel across Ukraine to reach the front lines that’s a very long journey. A journey were a lot of things can go wrong. Slow moving tanks and heavy equipment on Ukrainian roads won’t last long I watched a news report last night where the US general milly I think his name is said it would be impossible to eject the Russian military from Ukraine and that any battle would be costly for the west! Russia is more that capable of dealing with the nato threat and any nato troops arring in Ukraine will return home in body bags to the west

Very much as ou compoare with bad logistics of Your own kind. Our equipment always are in good shape and number one in Our systems is production is added to exelent transporttation.

As written the next step is Poland. They do have harbours and train to their borders in east.

You also forget this is no one timer. The incomming is lke trains several times a day or week. We will see.

My guess is much of that is for Poles and bases in Poland. Some is for Ukraine.

You again make the hope things are too costly and we have Your low level of money as well. Very much as You kind of expect we try to feed Our vehicles with better hay.

Why dont Yoiu learn about how good so manythings are here in west. You hardly look at Our dayi life. You can see it for free from all over the world. You dont.

Generals says many things. Ukriane has to eject the Russians themself. One thing is for sure. The Rusticans will not be allowed to take more of Ukraine if we can help.

And You lie again. We are the ones having kept Minsk2 even sliding some. Rustiaca has invade and Ukriane has not kept Minsk2. You write babuska propaganda crap of the worst crap. It even include nuke thereats.

We also are not skinny ones here freezing in homes and streets.You dont get oil and gas has been best to the price, which i many ways is fine. BUT it sont say we cant get enough from the rest of the world even the price is up.

Here You also forget, we have a high level to decline from. We declibne for a period We dont collapse by being able to change. So far we have had a warm cold wither. We today fx has more gas then we need. Even so we change to use less fossils better.

Norstream2 blickjed for the EU plan for it being the cheep easy option. We will see.

Its 18 degrees right here. The only change is better socks. I turn on a little less light as well. Im still fat.

Jens – NATO Europe has more gas because ITS INDUSTRY IS SHUTTING DOWN!! Because the gas is too damn expensive. Some idiots did sanctions and blew up the RELIABLE CHEAP 24/7 NORD STREAM SUPPLY.

It seemes You have forgot they on the ground mainly are up against same elderly stuff. So the difference most likely will be how the soldiers do their warfare.

Typical Russian blindfold version. The enemy is bad bad. Next of course also is the same in that kind of surprice in the dark, when parts of Our stuff actually works.

We see forward to see some of Your kind of upgraded T80 and Your many Armatas. Our donations need targets too.

Russia should allow China to deploy troops in Belarus. It is said tit for tat

China will not do anything why would they fight for russia. China thinks in centurys and in their way of thinking the time when russia was allied with the west and took chinese territory is not that far away.

They see russia as an “enemy of my enemy is my friend” type not more and not less.

If you allow, China has very deep and sincere ties with Russia, to which it owes its independence. The Russians rescued it in World War II, and then passed on the atomic bomb designs to it. The Russian Empire, the Chinese Empire and the Persian Empire they fought against common enemies already centuries ago.

I agree. From what I have observed, the Axis of the Resistance is in action, has the INITIATIVE, and does what it wants. It’s not loud like the cowboys of Wall Street, but effective.

The Polish elite has been pretty incompetent troughout History. Except for a brief winning spell centuries ago, Poland doesn’t understand much. In my opinion it is very loser. Like the American boss. Best wishes for a great defeat!

NATO Europe is gearing up to be stadium for some sort of world cup with USA and Russia reaching the finals after preliminary rounds with Iraq, Libya, Georgia, Ukraine, Syria, etc. Looks like this world cup is better to watch on TV, not live. Not sure what condition the stadium is left in after this world cup is over. Are blown up Nord Stream gas pipelines an early warning?

Wooow, should we be affraid of 500! trups and game changer 12 Leopard tanks? This goes more ridiculous day by day. 113 billion given to ukraine ended up in building private yachts that costs (per yacht) 350 million dollars, cocaine, whores for ‘elite’ and bank acounts back in Washington, private jets, islands in UAE, etc. What a gypsy third world sewerage you are.

The FEW (freemason) plan to destroy Europe is working.

It is true. But like the vaccine-poison war, they lose. They’re not as smart as they think they are. Their race-mixing society doesn’t work, it’s an act against God. And they die.