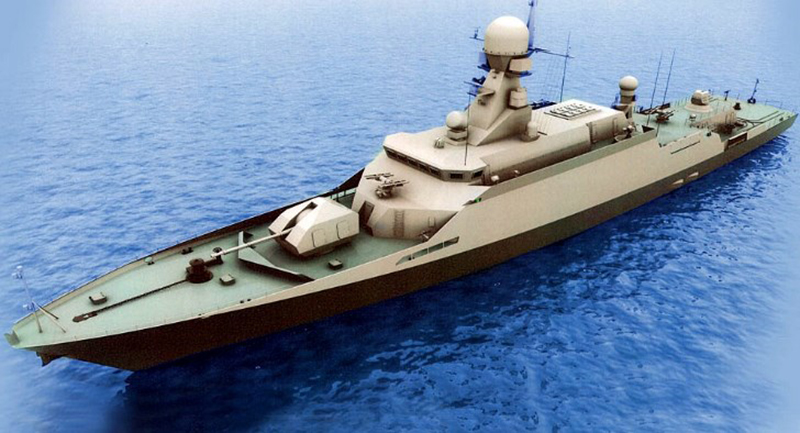 On May 10th at the Feodosiya Shipyard “Sea” in Crimea, a new small rocket ship model of the 22800 “Karakurt” (or “Black Widow”), previously named “Storm”, will be [SF editor: It’s already introduced] introduced into service. This is according to the official representative of the main staff of the Navy of the Russian Federation.

The news is both pleasant and unexpected. Pleasant because any intelligence regarding the construction of modern warships in Russia provides hope that the Russian Navy will undergo a speedy revival. But unexpected because of the fact that a month ago there was no reason to hope that Crimean shipbuilders would already receive construction orders this spring.

Remember: at the beginning of April the Deputy Prime Minister responsible for “defense” in the government, Dmitri Rogozin, visited the factory “Sea”. It appears that he is not very pleased. The company, once released on the sea and river expanses almost all soviet ships on hydrofoils “Rainbow” and “Comet”, both performed military orders and built amphibious hovercraft. But during the years of Ukrainian control in Crimea, “Sea” had completely collapsed. And, Rogozin disparagingly notes, it launched some “sort of katerki”.

Exactly five years ago, in May 2011, there was a serious accident at the factory. Then Feodosia made a significant purchase of four naval landing craft “Bison” (improvements from the Soviet Era creation). When the second “Zubr” was moved into the factory’s storage facility, a bridge crane, carrying a capacity of 50 tons, fell on the craft. Two people were killed and the collapse caused structural deformities in the factory. Were the factory workers capable of preventing the accident? This is unknown.

The decision regarding the repatriation of the “Sea” ship was made: the factory would undergo a modernization project before autumn of 2016. For this, states Rogozin, “Everything of that sort is Rubbish (an old Ukrainian saying), we are all going to disassemble and clean this workshop”. Further: the money for the “Leningrad Shipyard Factory ‘Pella'” should create an additional 1,200 jobs for the company by 2017, and facilitate the installation of new equipment to increase the capacity of the slip (device for launching ships), and so on.

Judging by this, guidance within the plant’s elementary order, although close, is still but a prospect. In the meantime, the contents of the “Sea” producing shops are all the same Ukrainian “Rubbish”. Nevertheless, in the midst of this devastation the decision was made to being construction of new warships. As if they were in wartime. Why did this happen?

Yes, returning Russia to the Crimea is an issue of the workplace. The old, honored factory was a sigh of relief for thousands of families. The first steps in the resumption of a fully-fledged enterprise have already been made. In Yaroslavl, orders were given to raid a diving boat and rescue boat for the Ministry of Emergency Services and the “Sea” was deployed. But for such a factory, this was still a small undertaking. The defense order from the Ministry of Defense, however, is another story.

But Rogozin promised by Autumn – and it is on the doorstep. Why is it that the “Black Widow” could not wait a few months, at least until the arrival of plant’s production order? In the end, another six months would have meant suffering for Crimeans. Longer suffering.

Then what, in fact, was the reason for an urgent beginning in the construction of the “Black Widow” in Feodosia?

In order to understand this, we must remember that in December of last year the first two small rocket ship 22800s were already constructed. Just like what was said of the “Leningrad Shipbuilding Factory “Pella” in Saint Petersburg. The ships were already called “Typhoon” and “Hurricane”. The first is scheduled to become part of the Black Sea Fleet in the next year. The second – another year later. Along with “Storm”, which, presumably, is still to be built in the 41st brigade of missile boats in Sevastopol, will receive a good “bad weather division”

But the trouble is that the military-political situation in the Black Sea and the Mediterranean is escalating at a rate such that the renewal of such an extremely dilapidated BSF seems unrealistic in the near future. Further taking into account that Zelenadolsk was ordered, last-minute, to create four small missile ship 21631s “Buyan-M”. The first pair of these were “Saw-wort” and “Green Dollar” in Sevastopol. And even the two have visited on combat duty in the Mediterranean Sea. The third project MRK 21631, named “Vishny Volochek” will be the main base of the fleet to come in the next year.

Yes, the “Brawlers-M” struck the whole world accurately and reliably with volleys of “Caliber-NK” cruise missiles from the Caspian Sea on targets in Syria. But these ships, from the beginning, were designed exclusively for navigation in the Caspian Sea and the lower reaches of the Volga, and, therefore, are equipped with water jets and have a small draft.

If at the beginning of the design someone told the designers that their small rocket ships will have to master the vastness of the Mediterranean, they would have designed completely different ships. Ships which are equipped for longer hikes, such as the “Black Widow”. Regarding the fighting capabilities the Main Staff of the Navy recently stated: “There is a high maneuverability, quality seaworthiness, and good architectural superstructure/hull, made by technology that reduces reflectivity. The ship will be able to perform tasks in the maritime zone at a distance from the base of about 3,000 miles”.

Moreover, the “Caliber – NK” of the “Black Widow” will also be capable of targeting units on the shore as well as in the sea. Each “Roughneck – M” will have exactly eight weapons – eigh supersonic anti-ship “Onyx” cruise missiles.
The only problem is the fact that the “Pella” is obviously not capable of delivering more than one “Black Widow” per year. There are plans to build 10 in total. But to wait a decade for a significant upgrade of the Black Sea fleet in a wartime scenario is not feasible. I believe that this is why a “fire” variant appeared from the Theodosia factory “Sea”.

oh dear, who translated this? a Martian no doubt, as I cannot understand half of it….