On June 10, Russian forces claimed control over the Kinburn Spit in the Ochakiv district of Mykolaiv Oblast. The distance from the tip of the Spit to the  Ochakov is only about 6 km. Thus, the Russian military positions in the spit may serve a foothold for an assault operation as the Russian military may shell the Ukrainian port in Ochakov. The spit goes deep into the sea and actually blocks the Dnieper-Bug estuary. This means that any vessels trying to leave the Dnieper River will be under Russian control.

The Russian advance was confirmed by the drone footage from the Black Sea. 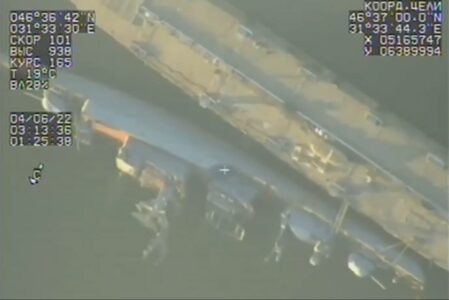 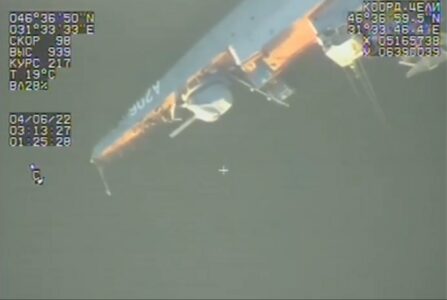 On June 3, the small anti-submarine ship “Vinnytsia” of the Ukrainian Navy was sunk by Russian forces during the capture of the spit. This corvette was decommissioned in 2021 and was awaiting disposal. However, according to some reports, the Ukrainian military regarded the need for technical restoration of the ship.

The ship was located in the territory of the naval base of the Ukrainian Navy, built in Ochakov by the U.S. The US special operations center, deployed to monitor the Russian operations in the Black Sea and transmit information to the United States and NATO, was reportedly destroyed.

The second ship of the Ukrainian Navy located in Ochakov in order to contain the potential offensive of Russian forces, was urgently evacuated to Odessa. It was the medium landing ship “Yuri Olefirenko” which was shelled during the evacuation. Junjing by the footage, the ship managed to leave the area undammaged.

Falling of the Kinburn Spit under Russian control is of great strategic importance. It may mark the upcoming Russian assault on the Ochakov oprt and further advance towards the city of Mykolaiv from the south.

It looks like mortar strikes, not precision strikes idiot..

Severdonetsk was 100% liberated
Reply to  Denazify

Ukrainian navy was not destroyed yet?

Catherine
Reply to  Severdonetsk was 100% liberated

Disinfo
Reply to  Severdonetsk was 100% liberated

Lol! Did you read the story? This ship was at the wrecking yard and the Ukrainians brought it back as their flag ship, how fitting.

Severdonetsk was 100% liberated
Reply to  Disinfo

Did you? There was a second also

Denazification at your request 😘

It was ground MLRS positioned at Kinburn spit.

They’re winning the war. Let them get drunk and take some pot shots the enemy was a landing craft that wasn’t returning fire. “Shit, those boys are having the time of their lives!” – Varsity Blues

Cope harder, and you aren’t Russian, your BS username.

I think grad is a waste of money. Seen whole salvos miss targets. Better to buy 1 or 2 precision than a whole salvo of grad

There’s a reason why the shitty Russian army didn’t take control of it during the past three months when it was up for grabs. Because nobody gives a shit about it. It has no strategic value. Vladimir Putin desperately needs to report some progress or all of Russia will turn on him.

Good, it’s about time. I guess this may indicate a push towards Odessa could be seen in the somewhat near future.

RU has six of these small old corvettes active in the Black sea fleet.

The landing ship would have some utility if captured.

The port of Ochakov is more strategic than Nikolayev. Strategically it is enough to sit on the eastern side of Nikolayev without a full blockade.

The Kherson region is of great strategic value with the onward push to Odessa . According to the moans of the west it supplies 14 % of Ukrainian vegetables and fruit.

It looks like Russia is preparing for phase 3 which is the liberation of Odessa.

Sooner or later it must be done.

I very hope so. Not doing this. and that can be probable also (only on political reasons, secret agreements between Putin and the JNATO terrorists) will cost Russia enormously on a long term. Odessa on the ukrop neo-nazis JNATO slaves side MEANS a forever thorn into russian sole.

ONE STEP AT A TIME…

This would mean that Russia’s slug advance in the east will be done by Christmas, months sooner than expected ….

complaining how long it takes to lose. lol ukies are funny.

I think maybe they wanted to beat their record for fastest retreat during Ilovaisk debacle. if the west was not attempting to rearm the skeleton army, Novorossiya would be back to normal by now instead of just mid misery.

when was it “expected”? odesa wasnt even in the Plan. Russia add new targets to the list because we are extremly weak and full of hysteria, even more than expected, sothat they have to push the line of nazi Land further 🙃

Dude this may be, non ironically, the FIRST navy VS navy engagement since the falklands/Malvinas war !!

I think in Falkland war was air vs ship, after belgrano sunk, im sure some naval fight was made between Egypt and Israel, and Pakistan vs India, i remember tarantul class or similiar was most succesful ship

I looked at the closeup map and it is a vital spot. Kherson port can be functional now. That US special naval operations center destroyed. How many US advisors were liquidated? They had to be there.

Very good news. The slow but steady closing of the Black Sea coast by Russia for any Ukrainian movements continues.

For details about the US-funded Ukrainian naval base at Ochakov see:

Excellent! Yet more news that the BBC has somehow forgotten to mention

That is a PERFECT military gain but hard to keep until the Ochakov port itself will be liberated from nazi hoholists. And further, Odessa is a stringent MUST, but West depraved politics will try ALMOST everything to prevent this, military, politically, economically, etc, etc…because will be the MOST heavy blow for the JNATO geopolitic and Ukraine also in ENTIRE war, even a harder blow than the loose of Donbass. Controlling Odessa means keeping entire control of Black Sea militarily and economically because in that way they will control Danube and thus entire commerce into the central Europe, blocking anything and making the economic cards for at least 1/3 of entire EU commerce.