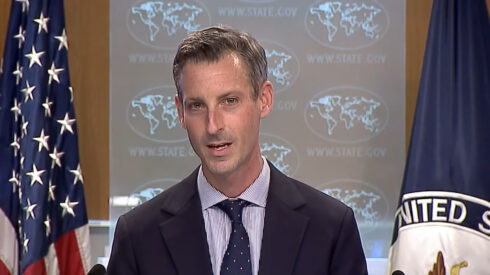 A veteran Associated Press writer named Matt Lee had State Department spokesman Ned Price flustered on Thursday after he pressed the government mouthpiece on alleged evidence of Russian plans to stage a false-flag against Ukraine.

During the press briefing, Price claimed Moscow could be seeking to engage in a “false-flag operation in order to initiate military activity,” in Ukraine.

This video allegedly includes, “graphic scenes, false explosions and corpses,” “crisis actors pretending to be mourners” and “images of destroyed locations or military equipment” on the ground in Ukraine.

After this announcement, AP writer Matt Lee asked Price to elaborate on what actions Russia might take.

Price referred back to the supposed propaganda video the American government has viewed, and claimed Russia positioned operatives in Ukraine a few weeks ago with hopes to conduct a false-flag.

Lee said, “That’s an action you say they have taken, but you have shown no evidence to confirm that.”

“I mean, this is, like, crisis actors, really? This is like, Alex Jones territory you’re getting into now. What evidence do you have to support the idea that there is some propaganda film in the making?” Lee asked.

“No, you made a series of allegations and statements… That’s not evidence Ned, that’s you saying it,” Lee responded.

Again, Lee asked for proof that shows Russians are planning on staging a false-flag.

Explaining to Price why he’s pushing back against the government’s flimsy allegations, Lee said, “I remember WND’s in Iraq. I remember that Kabul is not going to fall. I remember a lot of things.”

“So, where is the declassified information other than you coming out here and saying it?” Lee asked.

Failing to answer, Price condescendingly told Lee, “I’m sorry you are doubting the information that is in the possession of the U.S. government.”

Becoming increasingly frustrated, Lee asked, “What is the evidence that you have that suggests that the Russians are even planning this? I’m not saying they’re not, but you just come out and say this and expect us to believe it without you showing a shred of evidence that is actually true other than when I ask, ‘What’s the information?’ you say, ‘I just gave it to you,’ which was just you making a statement.”

Price responded by suggesting Lee go on doubting the credibility of the U.S. government and “find solace” in information the Russians are putting out.

This frustrating exchange was a bad sign for U.S. foreign policy going forward as the Biden administration is clearly up to something fishy.

Matt Lee isn’t the only one who remembers government lies that dragged Americans into unnecessary wars that resulted in hundreds of thousands of deaths.

In fact, Alex Jones, who Lee referred to in the exchange, has been on the forefront of exposing false-flag operations and government lies for decades.

See the full spat below:

People are to dumm or unwilling to see the truth, it is always in plain sight.

CIAtrolls are crying and raging 🤗

The Truth🏆 vs The White House of Lies 👹

The trouble with Alex is that he underestimates what evil can do. People ARE easily used, willingly directed, discarded, sacrificed and killed for the flimsiest irrelevant reasons. Im not the only one who perceived/s this…

the end
Reply to  Lazy Gamer

I think Ned Price is for some only to him known reason angry over most of Americans and would like to see them being torched up with Ruskies firecrackers. I think when shit hits the fan, he should be the one leading his nation (or some other crazies) into the inferno. I bet any sorry ass on this planet, even of that Danish scum jens, that Ned’s bullshit meter is larger that the diameter of the planet Jupiter.

“with our allies and partners” who are those??

For sure not Germany. And this is good!

the end
Reply to  Simon Ndiritu

The intelligence suggests there is a big force just waiting for action on Grenada.

It was a most bizarre exchange. There was a journalist in the White House who asked for evidence rather than dutifully repeat what the govt official told him. Matt Lee is the last of his kind.

I imagine the AP will put him on notice after this.

the end
Reply to  Tommy Lee

How da f**k have we ended up in this version of Idiocracy on steroids??!

And i bet, that more than half of the presstitutes in the room didnt even understood what Matt Lee is talking about..

the end
Reply to  Dawn

It must be your kosher food side effect.