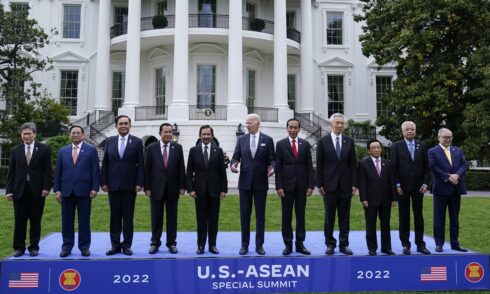 Leaders from the Association of Southeast Asian Nations (ASEAN) pose with President Joe Biden in a group photo on the South Lawn of the White House in Washington on May 12, 2022. Photo: VCG

US President Joe Biden intended to push ASEAN to spearhead the US’ China containment policy in Southeast Asia at Friday’s summit following his newly announced $150 million aid to maritime security cooperation in the South China Sea, Chinese analysts said, noting that neither the grandiose aid nor Biden’s talk would be able to tie ASEAN to the US’ chariot against China.

Analysts said that as the US-proposed infrastructure assistance, economic cooperation and maritime security training fall short of ASEAN’s expectations and pragmatic needs, and its pressure on the region over the Ukraine crisis and China runs counter to ASEAN’s fundamental interests, the joint statement expected to be released after the summit with the same old tune was only symbolic without any pragmatic significance.

On Friday, eight ASEAN leaders are scheduled to meet with US Vice President Kamala Harris, climate envoy John Kerry and other officials to discuss health, pandemic recovery, climate action and sustainable infrastructure before meeting with Biden at the White House in the afternoon. According to US officials and media, the group will discuss trade, South China Sea and the Russia-Ukraine conflict.

On Thursday evening, the White House announced a $150 million investment in the region, including $60 million in new regional maritime initiatives, $40 million in infrastructure, and $15 million in health.

Under the maritime security cooperation, the largest part of the aid, the US Coast Guard will deploy assets and assign personnel to the Indo-Pacific for maritime training and capacity-building, and a cutter for training to increase regional countries’ maritime law enforcement capacity.

The US also launched new initiatives to help ASEAN countries counter illegal, unreported and unregulated fishing, which was described by US media as targeting China.

Chinese analysts said the US unilaterally imposed the maritime cooperation to ASEAN although most of them don’t necessarily need it and are wary of it, with the aim of pushing ASEAN to the front in provoking China to serve its Indo-Pacific strategy.

Li Kaisheng, a research fellow at the Shanghai Academy of Social Sciences, told the Global Times on Friday that the US attempted to use the cooperation to involve ASEAN in the China-US rivalry and pull the bloc on the side of the US.

Cambodian Prime Minister Hun Sen said after arriving in Washington, DC that Cambodia will not choose between China and the US. “Whether or not you force me to take one, I will refuse,” Hun Sen said, according to the Phnom Penh Post on Thursday.

However, Chen believes only Vietnam and the Philippines may need the cooperation to boost their maritime security capability, and most regional countries including Singapore, Malaysia and Thailand do not have a strong need considering their diversified procurement of naval vessels and patrol vessels.

He said most ASEAN members will exercise caution over the implementation of the cooperation, especially considering the US’ strategic purpose of containing China.

China and ASEAN do not engage in a zero-sum game or bloc confrontation, and China welcomes any cooperation initiative that promotes long-term sustainable development and common prosperity in the region, Chinese Foreign Ministry spokesperson Zhao Lijian said at Friday’s media briefing in response to the US’ $150 million investment. 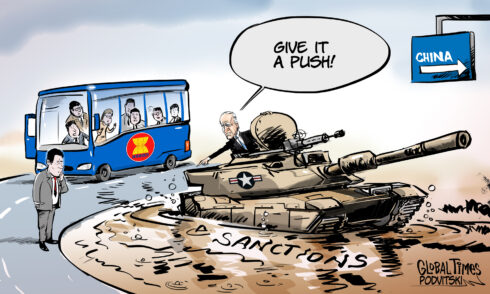 US pulling ASEAN into the quagmire of confronting China Cartoon: Vitaly Podvitsky

Several ASEAN leaders expressed their expectations on the economy, infrastructure and technology cooperation with the US, but what the US offered with its $150 million investment plan fell short of ASEAN’s needs, analysts said.

On infrastructure, the US is exporting quality standards and regulations on clean energy to the region, but what ASEAN needs most are railways and expressways, which the US cannot help due to its industrial structure and geographical distance, Li said.

In meeting with business representatives and US officials on Thursday, Singaporean Prime Minister Lee Hsien Loong urged the US to strengthen cooperation with ASEAN in emerging areas such as digital technology, trade facilitation and supply chains, zaobao.com reported on Friday.

On the Indo-Pacific Economic Framework (IPEF) Biden planned to offer them on Friday, Lee said the framework must be inclusive and bring tangible benefits to ASEAN to attract more regional countries to participate, and zaobao.com quoted analysts as saying that it is difficult to attract Southeast Asian countries to the framework because some of the standards set by the framework may be too high for developing economies.

Chinese analysts said behind the market behavior of the IPEF was the US’ profound political and strategic objectives aimed at forcing countries to decouple from China, which most Southeast Asian countries would be cautious of.

Malaysian Prime Minister Ismail Sabri Yaakob on Thursday urged the US to adopt a more active trade and investment agenda with ASEAN, saying ASEAN saw the Regional Economic Comprehensive Partnership (RCEP) as an important tool to invigorate regional business and economic activity through a marked reduction in trade barriers, the Malay Mail reported on Friday.

In reporting the US investment, many Western media compared it to China’s assistance to the region, as China pledged $1.5 billion last October to help the region tackle COVID-19 and achieve economic recovery.

Reuters said the US’ commitment was “pale” in comparison with China, and Deutsche Welle said the US’ limited economic incentives have left them sitting on the fence about whether to move closer to the US.

Li said that for ASEAN, economic cooperation is important, but what’s more important is whether the US’ incentives conform to ASEAN’s fundamental interests.

ASEAN leaders stressed that the cooperation must adhere to the principle of respecting ASEAN centrality, but the help the US offered is for its own needs of targeting China, Li said.

On the Ukraine issue, AP said Biden is looking to nudge ASEAN to be “more outspoken” about the Russia-Ukraine conflict, but Chinese analysts said ASEAN will not make a clear position on the issue or stand with the US to criticize Russia, because of their need for a strategic balance.

Thai Prime Minister Prayuth Chan-ocha reiterated Thailand’s neutral stance on the Russia-Ukraine conflict before heading to the US.

The neutral stance is also revealed through a joint vision statement, which is expected to be released after the summit. According to a draft version the Thai PBS World obtained, the joint statement would reaffirm respecting the sovereignty and call for humanitarian efforts.

On the South China Sea issue, much of the content was from the US’ maritime cooperation released on Thursday evening.

Analysts said the joint statement would be symbolic without any pragmatic significance, and ASEAN members will see more clearly  the US’ ulterior motives of trying to lure ASEAN members into an encirclement to trap China through the summit, which will only increase the ASEAN members’ distrust of the US.

China should turn all their rice fields into biofuel to fight clima change and get green rainbow as we are doing it. Only then the US will consider lifting our sanctions.

lol…may be climat change (if any) is a good thing

Everytime you open your mouth, shit from your brain spill thru it.

jews always stink in the mouth

I hope the ASEANs realise who they are dealing with, the empire of lies, steeling and cheeting, a mafia org. whom have arms everywhere, and offers you, what, scraps. apart from some klicks with new asphalt, and of course, security and weapons whom dont work, and compare that to China, whom have the means and capasity to take your nation into an new future, infrastructure and comers, localy and domesticaly, it need upgrading.

ASEAN countries are mostly composed of leaders with deluded mentality believing that US is the beacon of democracy and freedom looking after their welfare and interest… Look at the photo, all of them with smiles being so proud of stepping over the lawn of the Whitehouse with feeling of privileged VIPs struggling to speak in English . Biden treating them as cheap vasals ready to fight a proxy war against China.

The US is pathetic.

Buy-them is trying to buy them cheap to be the proxytute against China.