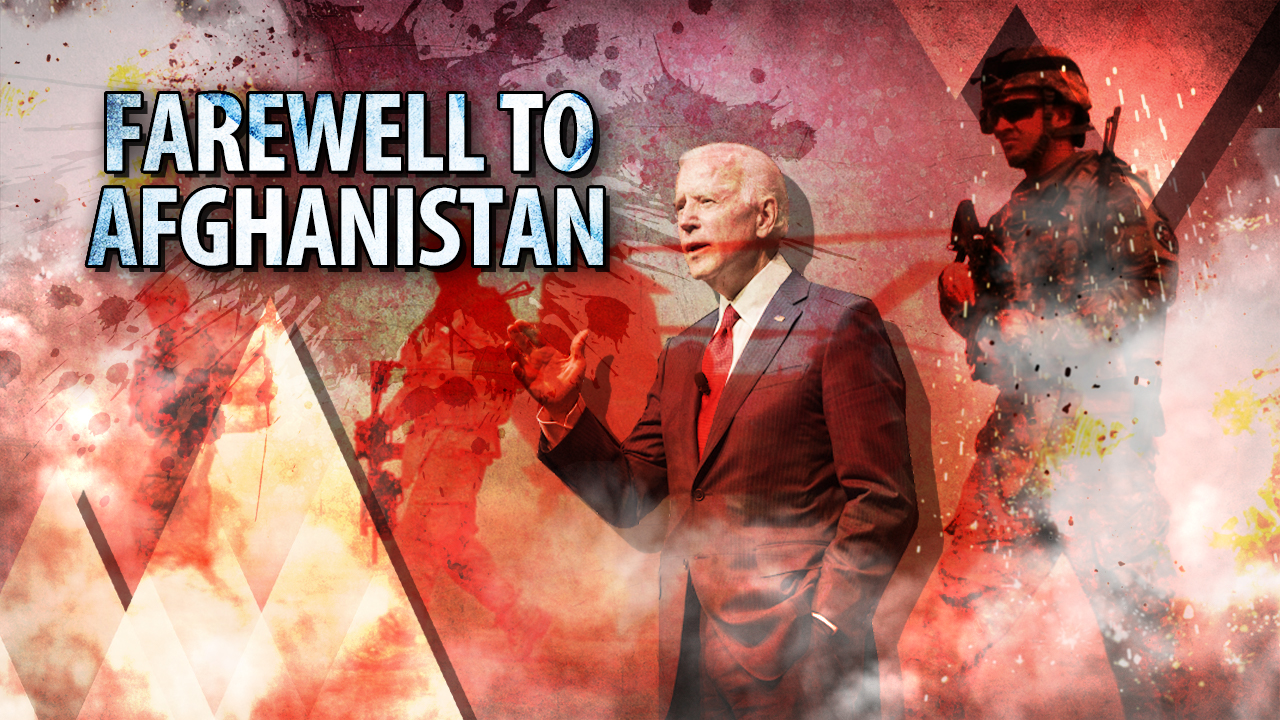 When it comes to the crunch, the American values of democracy and human rights are exposed as nothing more than empty rhetoric…

British Prime Minister Harold MacMillan reportedly said in 1963 that the first rule of politics was never to invade Afghanistan.  But as history shows us, human beings tend not to learn from the mistakes of the past, but repeat them.

In the past, western imperialists didn’t carry out their agenda under the banner of ‘human rights and democracy’; those that built the British empire didn’t hide their intention to ‘Anglify’ and ‘civilise’ the nations they sought to conquer.

However, in recent decades we have grown used to American regime-change operations promoted as a ‘force for good’.  Time and time again, as numerous countries have been invaded then destroyed, the opposite has proven to be the case, and the stark hypocrisy of this position, exposed. The last few days of chaos and bloodshed in Afghanistan have epitomised this legacy of destruction, and shown just how much the US government cares about the values it professes to hold dear.

The exit of the US and its western allies from Afghanistan on 31st August, branded ‘extremely successful’ by Joe Biden, was far from it. Not only did it see thousands of Afghans who had worked for the western-backed government stranded and even those with US and UK passports left behind, it saw a deadly terror attack take place at Kabul airport in which over 100 people died, including 13 US soldiers. But more than that, instead of the US handing over power to the Afghan government, the baton was passed to the Taliban, the very terrorist organization the allies had removed from power 20 years ago.

It’s hard to find any positives at all from the US retreat from Afghanistan. Republican Kevin McCarthy held a press conference last week which raised many questions about the decision-making behind the withdrawal. He asked:

‘If you built a military base there, where we had sustained it for 20 years, why wouldn’t you maintain it? We keep a base in Cuba today, why wouldn’t we keep a base for forward looking?…Why would you give it up? First and foremost…The Taliban fights in the summer and hibernates in the winter. If you were gonna allow the Afghan government to sustain itself, why would you draw down when the Taliban is at its height? Why? Who made that decision? Why would you remove the military before you remove civilians?…So no, we didn’t get anything right.’

When asked by an Australian news reporter this week if Australian servicemen had died in vain, the Taliban spokesman Suhail Shaheen answered ‘yes’. In so many ways, western intervention in the country has been a complete waste; of time, money, but most importantly, human life. The suicide bombing at Kabul airport was symbolic of this: it showed, that all these years after the US set out to eradicate islamist extremism from the country, it is still prevalent – and the Taliban are not in a position to counter it effectively.

There is also the big question of whether the Taliban can be trusted at all; they may be at loggerheads with groups like Isis K at the moment, but they have sheltered Al-Qaeda in the past – the group responsible for the World Trade Centre attacks. They are still designated as a terrorist organization by the United Nations (and Russia). Some have pointed out that the Taliban have broken every promise they have made over the last 18 months. Many in the British military who formerly served in Afghanistan have been highly critical of the allied departure. Colonel Richard Kemp, a former commander of the British forces in Afghanistan has warned that the world is now in a much more dangerous place now. He told Times Radio ‘We now face the greatest threat from terrorism since Islamist State at its height…They [The Taliban] will inspire jihadists everywhere’.

Any hope that the Taliban will adhere to the Doha agreement made in February may be impeded by the fact that the US has already broken its part of the bargain. Point 1F of the treaty states: ‘The United States and its allies will refrain from the threat or the use of force against the territorial integrity or political independence of Afghanistan or intervening in its domestic affairs.’ The US drone strike targeting a ‘suspected’ ISIS K terrorist on Sunday killing 10 Afghans from the same family, including, tragically, seven children, surely violates the terms of the agreement. No arrest, no trial – just avenging the death of US servicemen in ‘an eye for an eye, a tooth for a tooth’ approach. As White House Press Secretary Jen Psaki said: Biden didn’t want the Kabul airport bomber ‘to live on planet earth any more’. Biden considers himself religious, and often quotes the Bible, but does he think he has the right to play God? What happened to one of the keystones of any democracy – the right to a fair trial?

The last few weeks have shown American foreign policy for what it is – an exercise in hypocrisy.  The US intervention in Afghanistan 20 years ago was supposedly to eradicate extremism before becoming an exercise in nation-building, with the aim of promoting democracy and human rights. Yet the Biden administration has shown that when it loses interest, none of this matters. The extremism persists, as do the violations of human rights by the Taliban. The speed at which the US so readily abandoned all its ‘democratic principles’ is telling.

US President Joe Biden himself is steeped in hypocrisy. The man who said that President Putin was a ‘killer’ had no qualms about ordering the death of suspected terrorists recently. Then, in his latest speech on Tuesday, he claimed the era of American nation-building was over, before proceeding to say the US was now more focused on the threats of China and Russia.  Biden himself obviously doesn’t recognize the contradiction in his words. It seems Americans have imperialism written in their DNA.  Whether this US withdrawal from Afghanistan is indeed a retreat from the world stage, therefore remains to be seen.

“Some have pointed out that the Taliban have broken every promise they have made over the last 18 months.” Did we find Sean Hannity’s ghost writer? 1. The Taliban did not attack U.S. troops during that entire interval despite being bombed by the USAF. I’d call that a promise kept. 2. The Doha accords only required that a permanent ceasefire and negotiated end of the civil war be an ‘agenda item’ 3. The UN report said that the Taliban was tightening their control over Al Qaeda and restricting them but it was impossible to make any conclusions about the future. So this is not a promise broken either.

I have not found any promise that the Taliban has broken yet but minority religious groups and woman, I would bank on that one but that was not in the Doha accords.

Whatever the US was doing in Afghanistan it had nothing to do with our “values.” “Nation building” became the announced goal after an understandable rage because of seeming connection to 9/11. To give up on NB is not a demonstration that we don’t respect our “values.” It’s a recognition that it’s a stupid goal that can never be attained. What we do IN the US proves we have no respect for “democratic principles.”

The neocons and other fools will now argue that “terrorists” will now be a threat to the US thousands of miles away. If we didn’t have such an asinine policy of letting millions of Muslims into the US we wouldn’t have to deal with the pathologies that we in fact import.