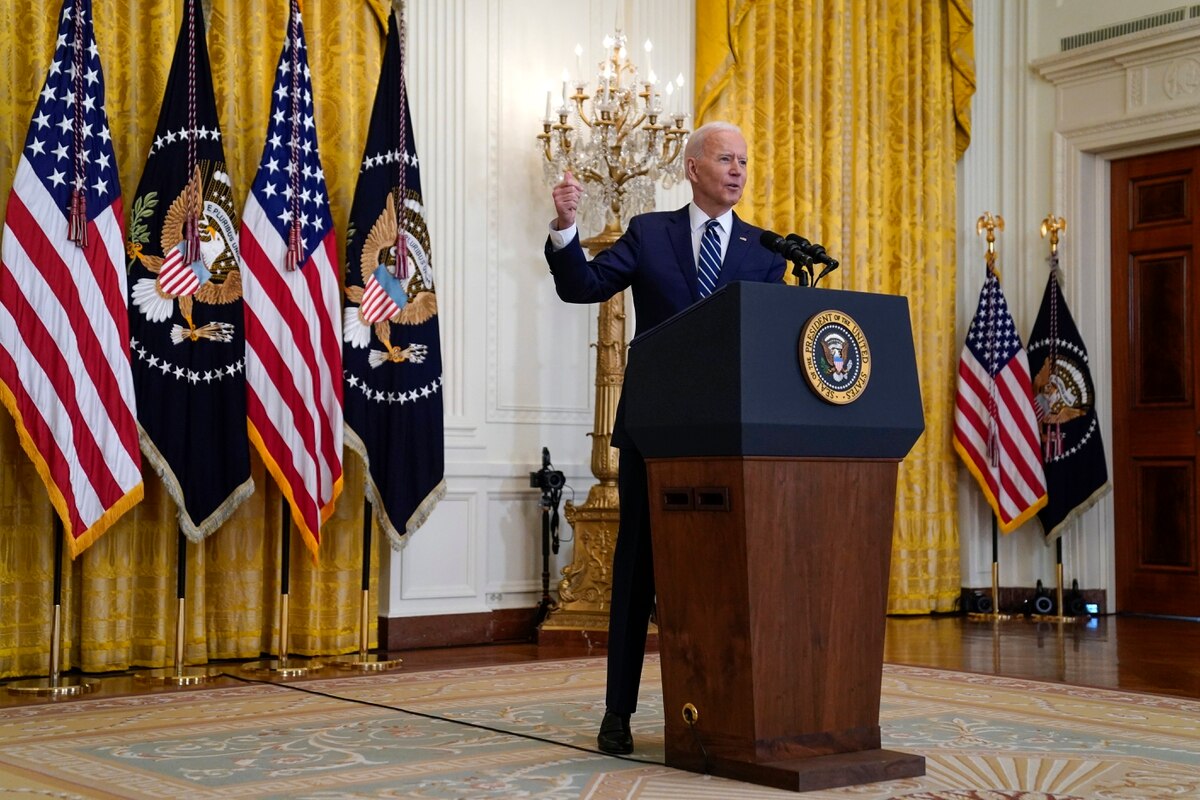 It includes $180 billion in new research and development spending on emerging technologies expected to define the coming decades and drive military innovation.

The American Jobs Plan totals $2 trillion in new spending over a decade through corporate tax increases. It mostly addresses concerns that a lack of federal investment in research and development risks the U.S. seceding the position of the world’s top technological innovator to China.

Leading the world in technology is “critical to both our future economic competitiveness and our national security,” Biden’s plan stated.

If the plan gets through the US Congress, it would invest billions into developing emerging technologies –  including quantum computing, artificial intelligence and microelectronics — that underpin weapon systems and will help the Pentagon compete in increasingly digital battlefields.

“Investing $180 billion in R&D across the federal government and civilian agencies would be a significant down payment on the future of innovation at a time when federal R&D is its lowest in decades as a percentage of GDP,” Tony Samp, senior policy adviser on artificial intelligence and defense for law firm DLA Piper, told C4ISRNET. “And when game-changing technologies touch so many sectors of the economy, there are certainly ancillary benefits to this kind of civilian investment to national security and the Department of Defense.”

The plan calls for a $50 billion investment in the National Science Foundation, where the Biden administration wants to create a new technology directorate to “collaborate with and build on existing programs across the government.”

The proposal is half of the $100 billion plan introduced by Senate Majority Leader Chuck Schumer, D-N.Y., for a similar NSF technology directorate.

Biden also calls for a $40 billion investment in upgrading research labs across the country, “including brick-and-mortar facilities and computing capabilities and networks.”

The Biden plan seeks to address the semiconductor supply chain challenges faced by the U.S. government by spending $50 billion on manufacturing and research.

Semiconductor manufacturing largely takes place outside the U.S., raising security concerns about the core technology for everything from smartphones to 5G networks to fighter jets.

The plan includes $35 billion for climate science and related “technology breakthroughs.” This of course will gain increasing importance in the coming months and years, since the Arctic is rapidly becoming a new hotzone for competition with Russia, and also China.

Additionally, it features $15 more billion for “demonstration projects” for numerous climate R&D priorities, including quantum computing, energy storage, and separation of rare earth elements, which are used in many defense systems.

Remove 10% for the big boy, then another 10% for his son, counts the bureaucratic costs and corruption at various levels, in the real economy even a dollar will not come, apart from the luxury consumption of those who took the own part.

Fine, Will the plan include cleaning up the lead and toxin filled water supplies of Flint Michigan and 3000 other communities? Or fix the broken bridges and potholes, Or renovate the obsolete public transportation system? Just wondering.

Factually a bribed one,whom unlike the media speculates do anything for a few ks in bucks, nothing big really to be frank,liars are good at adding easy zeros too easy,these days=lies!

I’ll believe it when I see it. I bet most of the funding will go to the contractors “consultation fees” than the actual work.

And those ‘consultant-experts’ were likely officers in the armed forces few years ago, directly recommending, and/ or signing-off on, any given procurement project. In US (and many western states) it’s a farcical revolving door situation, between role of public-sector armed forces procurement-oversight officer, and private-sector military-industrial sales-liaison officer.

Hahaha, I read the first few words of the title and was like yankees doing something right…”$2 trillions infrastructure plan” then I remember it is US we talking about here…you need a hell lot more than $2 trillions.

Fake trillions,usaain’t that smart as the majority of media homosexuals rant them on to be! You’d think if they had that kind of confidence,there would be no need for false flag events+rorts? This a sure sign of a dying empire in decay,next billions on dud helmets to out wit the enemy? April fools:

The US hates it’s own people. Undoubtedly this ill be spent for the rich and not the 99%, but the 99% will be on the hook to pay it back. That’s why this country is headed to civil war.

I guarantee most of it will just be lost to bureaucratic waste and corruption. US infrastructure will never catch up to where it needs to be until they stop funding such an over-bloated military.

Fog of War
Reply to  SnowCatzor

I suspect most will disappear into black projects and secret war preparations.