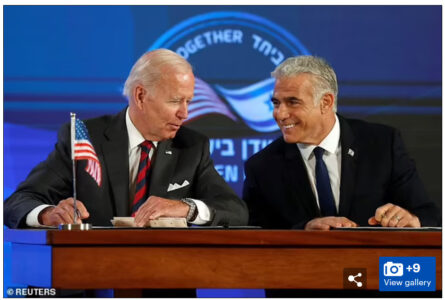 The document, officially called the Jerusalem US-Israel Strategic Partnership Joint Declaration, says the US would use all of its “national power” to prevent a nuclear-armed Iran.

“The United States stresses that integral to this pledge is the commitment never to allow Iran to acquire a nuclear weapon and that it is prepared to use all elements of its national power to ensure that outcome,” the declaration reads.

Despite claims from the US and Israel, there’s no indication that Iran has decided to develop a nuclear bomb as all of its stockpiled uranium is not enriched at the level needed for weapons-grade. Iran appears to be making a serious effort to revive the nuclear deal, known as the JCPOA, which would subject its nuclear program to strict limits and the most intrusive inspections in the world.

Iran is also a signatory to the Non-Proliferation Treaty, which Israel refuses to sign due to its secret nuclear weapons program. Last year, Biden renewed an agreement with Israel on its secret nuclear weapons program. Every US president since Nixon has agreed not to press Israel to sign the NPT, and in return, Israel agrees not to declare its nuclear arsenal and operates the program covertly.

After signing the declaration on Thursday, Lapid told Biden that diplomacy wasn’t enough to stop Iran from developing a bomb. “Diplomacy will not stop them. The only thing that will stop Iran is knowing that if they continue to develop their nuclear program, the free world will use force. The only way to stop them is to put a credible military threat on the table,” Lapid said.

Biden said that he believes diplomacy was the best way forward, but he has taken a hard line on the negotiations to revive the JCPOA. The day before, Biden said that he was willing to kill the deal entirely to keep Iran’s Islamic Revolutionary Guard Corps designated as a “foreign terrorist organization.”

The declaration Biden and Lapid signed also reaffirmed US support for the Memorandum of Understanding (MOU) that gives Israel $3.8 billion in military aid each year, which was signed in 2016. The MOU lasts through 2028, and the declaration expressed support for a follow-on MOU.

The twoo biggest terrorists on the planet just signed there dead sentence. If Iran still do not have the nuclear bomb, it will be soon unther the nuclear umbrella from Russia. And then it will be over and out for the biggest war criminal and the parasite that occupies Palestine. Soon the javelines will be on production in Russia, Iran, China and delivered to Libanon, Syria and Gaza/Palestine, bey bey markeva scrap. Kabooom

Work AT Home
Reply to  A.H.

Last edited 6 months ago by Work AT Home
-1
Reply

Work AT Home
Reply to  A.H.

Last edited 6 months ago by Work AT Home
-1
Reply

There must be something that Israel is holding beneath its sleeves making either Democrats or republicans foreign policies always favorable with chosenites… Could it be the Eipstein magic spell?

It is likely to be financial but the other things come into it too. However, there does not seem to be hardly any repercussions for anything unless the scum decide there is to be so threats of all kinds configure too.

Russia sees the nuclear options as deterrents which it does not want to use because of the nuclear contamination of the world which would result. They use it as a deterrent against being nuked. Their other weapons are very advanced because they did not wish to rely on nukes. Russia has more nuclear bomb shelters for their people than any other nation. Other nations have nuclear shelters for SOME, not all of their people.

Actually they signed FOR something.

jens holm Are you fucking serious?! You’re telling me Palestinians are the obstruct to peace? Here’s a little something for you, in that case:

But of course it’s the Palestinians who are the unreasonable ones.

Say what at this (far) point.

They love You too.

America the Israel bitch is always there to back up the Jews.

Israel, as a nation is paranoid delusional and psychotic. It is also a BULLY and a very nasty nation. They just would not want any peace, they want to move into a land which they have not inhabited as a nation for two thousand years, without any niceties or diplomacy, with the stick, the stick, more of the stick, bigger sticks and no carrots. How can its neighbours get along with them? Their belligerence is that which is going to bring them down. Nobody can continually survive by bullying and bullying because ones enemies have nothing left to fear and just want to take the bully out. Whoever lives by the sword, dies by the sword. Thus America, NATO and Israel will die. This saying now makes much more sense to me. It is not using the sword but LIVING and existing by the sword, without seeking GOOD relations, without seeking peace and detente, that is what makes one die by the sword.

Evil is, as evil does. You can tell they leave a trail of slime where ever they go and depart from.

I love living in America. The great bich to the state of Israel. Such a grand feeling it is to be part of a nation of Kike suckers. USA! USA! USA!

I went to college in ramapo NJ. They had a big statue remember the 6 million Jews killed in WW2. Memorials like that all over America. I guess the rest of the 70 to 80 million killed in that war aren’t as important. Or the 20 something million people killed by the communist in the Soviet union don’t deserve to be remembered. That’s the way it is in America. Jews are important, everybody else’s death, don’t worry.