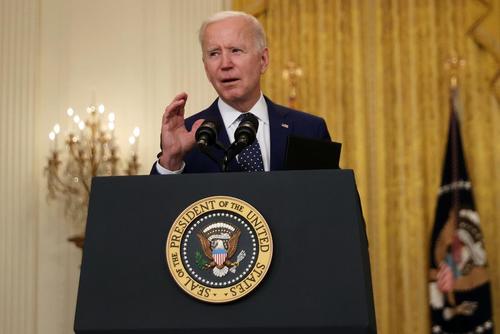 Although obviously not an avid reader or fan of Southfront, Michael Tracey’s concise post of April 16th very clearly captures the irony and hypocrisy of the latest round of sanctions announced by the Biden administration. The allegations of “influencing” or “interfering” in the U.S election process that undermined the public’s trust in the process was actually carried out on a daily basis by right-leaning corporate media such as Fox News or Newmax. Not to mention corporate media’s total censorship of the New York Post’s story on the infamous Hunter Biden laptop. Why were none of these entities sanctioned? Even ignoring the fact that Southfront barely reported on the U.S. presidential elections at all, it is hard to miss the utter hypocrisy of the administration’s selective finger-pointing. By pointing out that Southfront is an “obscure” ( yes, we do not have the viewership of many corporate media sites) and “amateur” website (we are a volunteer, non-profit organization), Michael Tracey further highlights the utter absurdity of the allegation that Southfront somehow influenced the electoral process of one of the most powerful nations on the planet.

Deliberately vague weasel-word terms like “election interference” and/or “influence” gained such purchase in the past four-to-five years for a simple reason: the deliberate vagueness allowed people in power — elected officials, pundits, Intelligence Community functionaries — to claim unspecified expertise on a supposedly emerging range of threats.

The threats were portrayed as particularly scary because of their alleged potential to Undermine Our Democracy. Consequently, these power-wielding people acquired a potent tool in their arsenal to accuse political enemies, whether foreign or domestic, of contributing to the proliferation of new and scary threats. The accusations were so deliberately vague that it was almost impossible to ever rebut them; sometimes even retweeting a meme was sufficient to be implicated in a foreign plot to destroy the very foundations of America. If an act so trivial as clicking one’s mouse on a social media post could be spun as abetting a foreign-backed “interference” or “influence” scheme, then that created an endless number of booby-traps for you to walk into.

So there was nothing new about the suite of anti-Russia charges promulgated Thursday by the US federal government, and parroted as usual with maximum credulity across the US media ecosystem. The charges were again predicated on the idea that Russian “interference” and/or “influence” is an extremely foreboding test for the survival of US Democracy. Taking bold action, the Treasury Department levied sanctions against a bunch more Russians for their claimed nefarious behavior in carrying out this interference/influence — a fulfillment of Joe Biden’s oft-stated campaign pledge that under his watch, Russia would finally “pay a price” for allegedly engaging in such activities. Donald Trump, it was thought, had been appallingly lax in his resolve to confront this threat; now, a new sheriff is in town.

Leaving aside the question of whether it’s prudent to assume that Janet Yellen is suddenly in possession of a foolproof methodology for attributing the provenance of “cyber operations” to specific foreign individuals and nation-states, it’s worth emphasizing what exactly is being alleged in the statement. The Treasury Department document reads: “Outlets operated by Russian Intelligence Services focus on divisive issues in the United States, denigrate US political candidates, and disseminate false and misleading information.”

Noting that these same characteristics could be just as easily applied to US corporate media outlets is so blindingly self-evident as to almost be redundant. Were there not “outlets” during the 2020 election that were “focused” on “denigrating” Donald Trump? Or for that matter, Joe Biden? Do “divisive issues” not tend to be “focused on” by these same outlets as a basic precept of their core business model?

Yet when scary Russian outlets are said to employ this same logic in their own content-production enterprises, it magically becomes dangerous enough to justify all manner of punitive government and corporate action. Including but not limited to: censorship purges, tighter regulation of online speech, and, as Biden announced Thursday, sanctions and expulsion of diplomats. “Disseminating false and misleading information”? The entire US media just got caught “disseminating” a fake story about Russians putting bounties on the heads of US soldiers in Afghanistan. If you’re truly concerned about the dissemination of “false and misleading information” having deleterious effects on the health of US political culture, your first target should be CNN.

One of these supposedly-scary Russian “outlets” identified by the Treasury Department is the website SouthFront. (Gee, way to give them far more publicity than they could’ve possibly generated on their own. I’m sure more than .001% of Americans had heard of this obscure website before this week.) SouthFront is alleged to have committed the grave crime of having “sought to promote perceptions of voter fraud” after the 2020 election. I wrote extensively at the time about how the “perceptions of voter fraud” promoted by Trump and his media allies were mostly ill-founded, overblown, and illogical, and it’s true that consumers of fraud-obsessed media coverage often became more-than-a-little deranged. But that’s not the point: the point is whether or not promoting these theories constitutes some sort of terrifying “interference” that requires a forceful punitive response. In which case, the entirety of US right-wing media could be deemed as complicit, requiring vast state-backed retaliation (which may well be the long-term goal). Promoting ill-founded perceptions of political events might be bad, but it doesn’t generally rise to the level of Democracy-Threatening Existential Crisis unless you have some other motivation for raising it to that level.

In any event, Biden declared a “national emergency” with respect to this vague threat, on the ground that Russia had violated the “sacred” nature of US presidential elections by way of these website postings — even though the criteria invoked would apply to an infinitely wide array of US “outlets” that do exactly the same thing. Nonetheless, it’s henceforth an “emergency” to be on the lookout for irrelevant amateur websites like SouthFront. (Aside: Does anyone really view as “sacred” America’s multi-year presidential election rituals, into which billions of unregulated dollars are poured? Most Normies seem to be actively disdainful of presidential election melodrama and the attention/resources these rituals consume, rather than worshipful of their “sacredness.”)

In his remarks, Biden also introduced what is possibly an even vaguer term than “interference” or “influence” to describe this horrifyingly ever-present threat: Russia, he alleged, was guilty of “engagement in our elections.” And again, this “engagement” was said to consist of Russian Government-backed websites publishing posts about issues related to the 2020 US presidential election.

So now we have an official “national emergency” declared vis-a-vis Russia’s conduct in orchestrating website posts, which has in turn been lumped into another “emergency” that apparently encompasses the ongoing escalation of conflict in Eastern Ukraine — a geopolitical domain Joe Biden has always taken a keen interest in. And this is largely being received not as an ominous development in US relations with a nuclear-armed power, but instead as a cheerful sign that the US has returned to asserting its rightful global dominance.

One neat trick of this whole rhetorical framework is that foreign “interference,” “influence,” and “engagement” will obviously never be completely curtailed, especially if these things consist of internet postings. Therefore, the framework authorizes a perpetual war-like footing against Russia (or whatever country is next in the line of sight) which is especially convenient if you are interested in waging a New Cold War to garner whatever benefits (political, military, economic) you calculate comes with doing so. The rationale for keeping this ridiculous tit-for-tat going in perpetuity is clear — but don’t expect much clarity on that score from the US media, which always takes delight in blaming scary foreign entities for partaking in the exact same Democracy Undermining behavior that it’s guilty of itself.