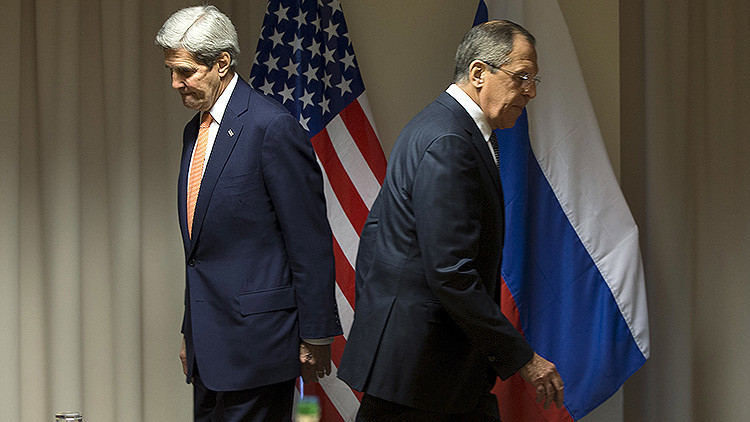 “For the Obama administration came the moment of truth. For two years the White House has been unable to clearly express its intentions in Syria. It led a campaign against the Islamic state and fought against the regime of Bashar Al-Assad, and thus has only created more problems and no solution”, writes the columnist Patric Smith for The Fiscal Times.

In Washington they probably thought they would find a way out of this situation. The need for a joint struggle against the common goal is clear and the only effective option is “join forces with Russia,” said American columnist.

According to him, the foreign ministers of the two countries, Sergei Lavrov and John Kerry realized that their main enemy is the Islamic State and that the overthrow of Syrian President Bashar Al-Assad will lead to “another Libya”.

However, the White House does not have a common position on the Syrian conflict.

“It’s time to restore order and to devote all fight against the Islamic state, which certainly requires a change in the coalition or the real actors in the process will start knocking on the door,” says the analyst.

“The failure of the negotiations in Geneva may have given some results, because the war in Syria which lasts already for more than four years enters a new phase,” according to the article.

“During the discussions, the participants in the peace process have not determined what is even” moderate Syrian opposition, “for which Washington does not know whether they fight against the Islamic state, against the troops of the Syrian president, or perhaps against us”, says Patrick Smith.

The analyst also pointed out the two events that changed the attitude of participants in the negotiations. The first is the progress of the Syrian army in Aleppo, and the other plans of Saudi Arabia to send troops on the ground, which also increased the activity of other US allies in the coalition – Turkey.

The objectives of Riyadh or Ankara are clear. Some want to strike at Damascus and keep their sectarian war, and others also want to oust Assad, but also destroy the Syrian Kurds, added the American columnist.

John Kerry conceded defeat in Syria and wants to start a war together with the Russians ?!

“Russian and Syrian forces have increased their campaign in areas that rebels held around Aleppo, where there still lives about 350 000 people. Reuters writes, “The largest city in Syria before the war might soon fall”??

So what is wrong with the title of this article? Here we have how the good old Reuters and others which say that “Aleppo may soon fall”, which gives the reader the impression that Aleppo is “on the verge of falling into the hands of hostile forces.” Of course this is not a coincidence, because the city is in the hands of foreign militants and a handful of local Islamist fighters for a long time and perhaps will soon to be “liberated”. This is what Reuters should write.

While it is true that Bashar Al-Assad is certainly not merciful leader in the history of the Syrian people, we can bet that the majority of Syrians wish that the war would never started, so they can go back to their lives they had before the so-called “revolution”.

Now in Aleppo and some other cities people live in ruins and with the various Islamist gangs that control their lives. In any case, Reuters claims that Russia and Iran had surrounded Aleppo, and when a city will “fall” it will mean the end “of the opposition,” or at least “moderate” opposition.

Saudis and Turks know it well and they said that to Kerry who is desperately trying to restart peace talks in Geneva. The problem for the US and its regional allies is simple. If the Syrian army with the help of Russia and Iran end up victorious against the opposition on the battlefield, there is no need for peace talks. Assad’s government will be restored, and that’s all.

ISIL will continue to exist in the East, but the main problem of Moscow and Tehran is to quickly liberate major urban centers in which the Syrian army, the people and also the government will be safe.

Riyadh and Ankara are very worried, because it might turn out that they threw in the wind five years of efforts and billions of dollars to overthrow Assad.

On the other hand, the Russians and the Iranians have shown a willingness to discuss a cease-fire, but John Kerry himself said that the opposition does not want to negotiate.

“Do not blame me, but go and accuse those who oppose negotiations”, said Kerry to humanitarian workers at donors’ conference on Syria in London.

He said that one can expect another three months of bombing which will destroy the “opposition”, according to Middle East Eye, adding that Kerry´s support for humanitarian organizations creates the impression that the United States had rejected their efforts in supporting the rebel groups.

In other words, Washington has accepted the fact that in this situation there is only one way out. Or fight with Russia and Iran, or to admit that the concrete efforts for yet another shift of the regime in the Middle East is simply impossible to implement.

“In fact he said that the opposition did not want to negotiate and does not want a ceasefire, and that they were the ones who went from Geneva,” said one humanitarian activist for the agency MEE.

“What do you want from me? To start a war with Russia? Is that what you want?” quoted Kerry´s words one employee of the humanitarian organization for Middle East Eye.

Among the “humanitarians” are many of those who say that the United States completely rejected the idea of ​​”Assad’s departure.”

Washington now only wants to use Assad, so it´ll be able to “sell their story to the public.”

“The third source who in the past six months served as the contact between the Syrians and the US government said that Kerry sent a letter in October to the President of Syria in which was stated that the US does not want his departure,” writes Middle East Eye. Kerry then allegedly said that the story of Assad´s bombing was needed to sell the story to the public.

Of course, Kerry will not be able to “sell” this story the Saudis, the Turks and Qatar, which now openly question their attitudes and are outraged at the US ally, especially after making it clear that the United States dropped the ultimate overthrow of the Syrian president, according to Zero Hedge.

Kerry received many messages of criticism after he failed in Geneva to put more pressure on Turkey and Saudi Arabia. Both countries are very concerned about the possible defeat of the so-called “Syrian opposition” and the United States seem to have abandoned the “Free Syrian Army”.

So, as for the United States to Riyadh, Ankara and Doha this is also the moment of truth – victory or death. Or will this puppet war in the next two weeks turn into a world war or Aleppo will “fall” into the hands of Assad, which will be really humiliating defeat for US foreign policy, and more importantly, it will stop the Saudi efforts to establish hegemony in the Arabian peninsula.

But again, you never know. Who would few years ago say that US and Iranian military commanders would be on the battlefield on the same side, which eventually happened in Iraq. Unofficially though not on a large scale, but it still happened. So that John Kerry will, if it will be necessary, also find a way to sell the story to the “public” and probably also to the “allies”.

“Now he can fully withdraw or take the side of Russia and fight against Islamists.” seriously? just two years ago they started the war in Ukraine and now they are going to join Russia?