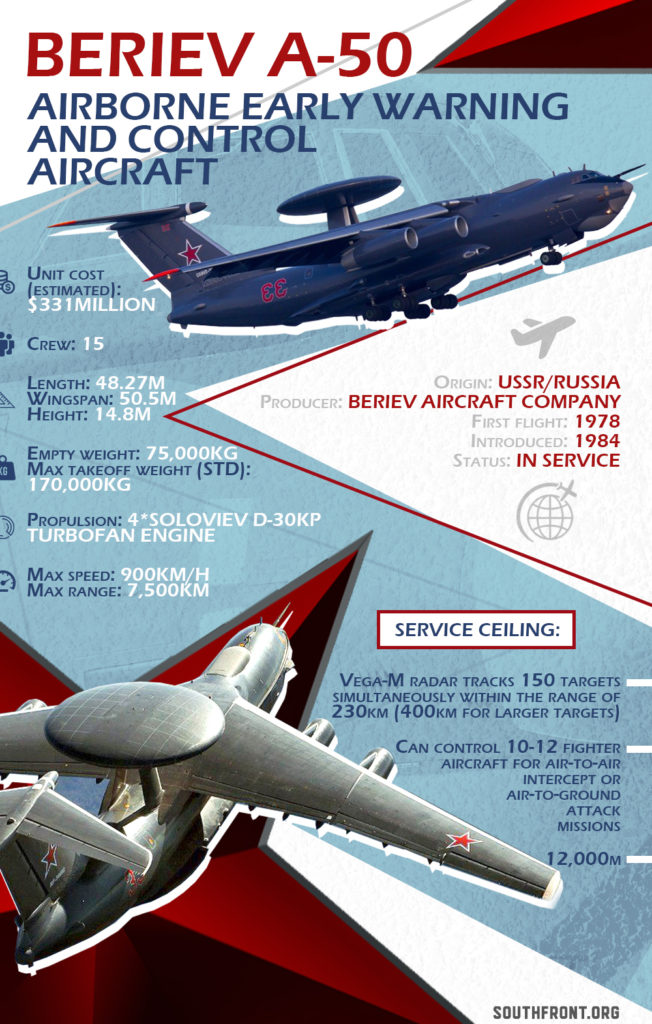 The Beriev A-50 is an airborne early warning and control (AEW&C) aircraft based on the Ilyushin Il-76 transport plane.

first build more than 1 A-50 then we can talk. russkies are a joke

Erhm A-50 have been in service for decades now, know your stats kid.

but but… Rocket Nose says USA is invincible! he claims S-400 can’t detect a F-35 past 17 kilometers lol

Then why do you repeat his BS? Just curious, will daddy keep him out of prison. :/

shut the hell up antisemite, the whole entire world knows the S-400 cant shoot down a stealth fighter like an F-22 past 10km and an F-35 past 17km. I did all the calculations and consulted with experts who verified these claims. S-400 has NOTHING against USAF stealth planes. get over it.

AshkeNAZIsts are not semites, they are the REAL antisemites. Prepare yourself for extinction dinosaur

Khazars are another Shemitic people, like Chinese are decedents of Shem and so are Turks and so on. These people are invaders into Europe and so the indigenous Japethites must liberate their ancestral home lands from the invades who come from a land is Asia East of Turkey. https://concisepolitics.files.wordpress.com/2015/03/khazaria-map.jpg?w=720&h=628 http://www.geocurrents.info/wp-content/uploads/2013/11/6889214_f520.jpg

Let me see your calculations, your notes and conclusion. And please, name your “experts”.

And if you know the facts about “Stealth”, you would know that the correct technical term, wich you clearly dont know because you have nothing more that wikipedia, is “Low Observable”, wich means, you can see me, but you gotta work for it.

let me see… here, National Interest experts wrote an article. https://nationalinterest.org/blog/buzz/war-sky-russias-s-400-vs-americas-stealth-f-35-and-f-22-who-wins-26791 Truth is the S-400 can only get a weapons quality lock on an F-35 from 30km and an F-22 from 17km. It’s basic physics, based off the radar cross section of both planes and the standard detection ranges for the S-400 targeting radar. Meanwhile the F-35 can detect the S-400 from 400km away and launch an anti-radiation missile/glide bombs at it from 150-200 kilometers

Well, funny that the IAF officially said that one of their F-35I was found, locked and shot at by the syrians, and the plane had to divert “due to a birdstrike” on the way home, only to be secretly packed in a container shipped back to the US, and then every F-35 flights stopped.

Every plane with a RWR that works on the radars frequency´s, gets painted by radar can see the radar, with the radar range determing how far away the plane can be hit/see/be seen.

Once again, stealth does not mean invisible, ask the Serbs, that 20 years ago, when they defended there country against another illegal NATO attack.

And the japanese F-35 that crashed; the officially statement says that “..then it dissappeared from our radars…”

Your “calculations” are just theoretical numbers meaning nothing in a real situation, and your “consultation with experts” are just linking to an article.

also this is your last chance to delete your profile or you’ll be added to Josh Gladwin’s second twitter list, “internet nazis”. there are already 5000 nazis added to both lists, you will join it soon if you don’t comply

Kolomoisky nazis are in the list, or AshkeNAZISTs are exempt?

so disagreeing with you on the stealth/AA topics means someone is a nazi? Well you guys escalate things quickly……

how silly. US airforce has jacob’s nose, largest most powerful AWAC on the planet

not funny at all. Wanna know who thinks this crap is funny? NAZIS. That’s who.

Hmm. Didn´t know that I was a Nazi – but you must know. But actually – I´m not a Nazi because I don´t think anymore that you are funny – I found a better expression. It is “hilarious”. You should also be more economical with the Nazi-accusations because to much usage makes it a blunt knife.

You and your masters are nazis/nazionists/zionazis. NAZIsrael and their braindead slaves from ‘Murica.