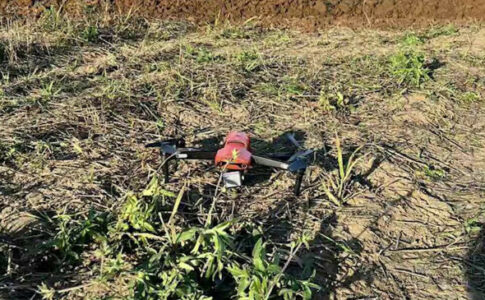 The Border Committee of Belarus reported that Belarusian border guards intercepted a Ukrainian drone. The incident occurred on November 2, 1 kilometer from the Belarusian-Ukrainian border in the Gomel region.

According to the report, border guards noticed a quadrocopter heading from the Ukrainian side to the Belarusian territory and forcibly landed it.

“As a result of the analysis of the UAV’s memory card data, the fact of its launch from Ukrainian territory has been confirmed. It has been established that the quadcopter was used by Ukrainian paramilitary units on the border with the Republic of Belarus,” the ministry stressed.

The contents of the discovered photos and videos indicate that the drone was equipped with an infrared vision system and was used for training the movement and dumping of explosive devices, as well as conducting reconnaissance and shooting technical means of border protection on the territory of the Republic of Belarus.

The incident was likely a result of a technical malfunction or a mistake of the Ukrainian military. Kiev is yet to comment on the incident.

At the end of October, the head of the State Border Committee of Belarus warned the Kiev regime that in case of provocation  against Belarusian border guards, Minsk would give an appropriate response. According to the Belorussian military, the situation on the borders with the Baltic States and Poland is calm. Military units, including territorial defense detachments, were deployed along the border with Ukraine.

Speaking of which, does anyone know how long the $158 mln 2016 anti russian fence partially erected by Yatsenyuk before absconding with the cash, lasted ? wondering how many tanks were stiffled by the chicken wire fence and for how long. LMAO

Hard times to be a drone. It looks tired. It might look for asylum. Good short video and text.

Hundreds of mobilized men are dumped off by their commanders in Crimea, with no food or water.

And with no winter clothes 😀

So far its not winther and as long as You are at the coast the very cold period is not so long.

You should see a climate map for the area. Water might be a problem but many civilans has left.

Of course they are not given food and water, because they are ordered by Putin to rob it from the ukrainians civilian population which they ought (according to their jewish-russian commanders) to rob, violate and kill, after invading and stealing their country. It’s always the same tactic the communists use. It’s called red terror and genocide.

Russia is ready for second strike. i.e. Launch nukes on Russia does not protect USA from MAD.

Joe B. Alzheimer does not understand that USA is an island. USA cannot stop bombs coming from the ocean directly on the costal cities. For instance: only 3x 9Mt bombs can cover the west coast with 1 rad* fallouts. If they come near the base of hurricane, fallouts would cover 1/3 of USA. *or more

Beware!!! Reconnaissance is the first thing the globalists always do.. They hate wasting money.. (not human lives)

Looks like a commercial autel robotics evo II duel R thermal drone, made in the USA. hmm go figure probably got it at best buy.