Russia is forging ahead with plans to establish an airbase in Belarus. President Putin has signed off on the proposals which were first revealed by Russian Defence Minister Sergei Shoigu in 2013. Although there is existing cooperation between Belarus and Russia in terms of finance, energy supplies and military (with Russian SU-27 fighter planes already based in Belarus) this will be the first full-scale base since the dissolution of the Soviet Union.

Against this backdrop of increased military cooperation with Russia, the conflict in Ukraine continues to make demands on Belarus and impact not only the economy, through loss of trade with both Russia due to sanctions and Ukraine due to the conflict, but it also threatens to provide a steady source of armed radicals. As Belarussian mercenaries are unable to fight with the Ukraine army, as Siarhei Bohdan of the Belarus Digest explains, they instead gravitate towards Right Sector and other nationalist and fascist brigades. Extremist groups such as the aptly named Malady Front and other far-right organisations provide a supply of volunteers and mercenaries, with unconfirmed reports that bespoke squads are being formed in North-Western Ukraine (Charter 97).  There they are further radicalised and their hatred of Russia is aggravated, plus they receive combat experience and weapons. Whilst President Alexander Lukashenko walks the line of maintaining diplomatic relations with Ukraine and cooperation with Russia, the returning Neo-Nazis present an increasing threat to Belarus security, especially as Minsk continues to host peace negotiations with participation by the Belarussian Government.

Senior Analyst Siarhei Bohdan explains the cost of the conflict for Belarus, and why Minsk has every reason to desire a peaceful resolution to the conflict between Kiev and Novorussia (introduction by Nenada, the following article appeared in Belarus Digest)

Belarus and the Ukraine Conflict: More Losses Than Gains? 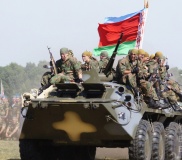 Although the Belarusian authorities have managed to promote their country in a favourable light by hosting the high-level talks on Ukraine, they seriously worry about the direct spill-over of the Ukrainian conflict.​

Belarus has already suffered economic losses from the Donbass war as its trade with Ukraine has fallen by more than 40% in 2015. In addition, it has hosted more than 100,000 refugees and had to resist significant Kremlin’s pressure.

Seeking to prevent the pressure, Minsk decided to avoid siding with anybody and developing relations with all involved parties. Maintaining friendly relations with Moscow and Kyiv, it rekindled its relationship with Europe. Now, Minsk sent another message as President Lukashenka urged Americans to participate more actively in the Ukrainian peace process.

Minsk’s trade links explain much in its behaviour regarding Ukrainian crisis. Having a fragile national economy, the Belarusian government cares about Ukraine as a partner. While bilateral trade in goods in 2012 made up almost $8bn, last year it fell to just $5bn. It was 7.5% of the whole Belarusian foreign trade. That is significantly less than with Russia (48.7%) yet still a lot.

Even more important is the considerable positive trade balance that Belarus constantly had in trade with Ukraine, because Minsk for years has been struggling with a large negative trade balance in Belarus’ foreign trade.

Minsk opted for its current neutral position taking into account not only Russia’s and Ukraine’s significance for the national economy but also the EU’s. After all, more than 30% of Belarusian exports in 2014 went to the EU, and about 20% of imports came from there.

To revive trade with Ukraine, Minsk agreed last month to wider use of Ukrainian hryvnas in bilateral trade despite obvious risks and losses related to such a decision. The significance of the links with Ukraine for Minsk were emphasised by Minsk daring to supply Kyiv with military equipment.

Through Ukraine to Europe?

So far, Belarus has managed to minimise its losses related to the Ukrainian crisis. Further Minsk even succeeded in using the Ukrainian crisis to rekindle its relations with European nations. The OSCE Chairman Ivica Dačić during his visit to Belarus on 21 July announced, “Minsk has became a synonym of peaceful regulation in Ukraine.”

The exact role of the Belarusian government in Ukraine’s armistice talks remains a moot point, although it clearly plays some part and wishes to play an even bigger one. On 9 July, Belarusian Foreign Minister Uladzimir Makei said that the Belarus could host a secretariat for the talks on Ukraine. The Belarusian web-portal Tut.by commented: “That will to the maximal extent possible bring Belarus closer to the role of mediator in the peace process.”

Unlike relations with Europe, Minsk’s relations with US remain essentially in the same troubled state. Washington recently extended sanctions, and put Belarus into the group of the worst violators of human trade, worse even than Afghanistan and Uzbekistan.

Hence the new moves by Minsk. Last week, Lukashenka met with US Republican congressmen Dana Rohrabacher, Gregory Meeks and Stephen Cohen. On Tuesday, in the presence of a journalist of US-run Radio of Liberty he emphasised the necessity of bigger US engagement in solving the Ukrainian crisis.

Nevertheless, the uneasiness that Minsk feels about the conflict to the south of the Belarusian border find its expression in many occasions. For example, usually Belarusian Special Operation Forces celebrate Paratroopers Day at their military bases. This year, however, the Belarusian army made a point of staging military shows of special forces in the centres of Brest and Vitsebsk where the most renowned special forces units are stationed.

Celebrations included demonstrations of combat skills and eloquent gestures. Thus, in Brest, on the Ukrainian border, the show featured Belarus’ deputy defence minister, commander of Belarus’ special operations forces and deputy commander of Russia’s paratroop forces. The demonstration of force became even more pronounced as one of the speakers announced: “We are not the Health Ministry, we will not warn [before acting].”

Top Belarusian officials openly discuss what they consider a threat. On 4 August, Lukashenka told journalists, “there is a lot of violations on the [Belarus-Ukrainian] border… Violations ranging from smuggling to – what worries me the most – infiltration of persons with weapons.” Two days earlier, acting Secretary of the Security Council Stanislau Zas’ also assured a Belarusian TV channel that the government was taking measures to prevent weapons from Ukraine entering Belarus.

On 11 June, the chairman of the Belarusian State Security Committee Valery Vakulchyk said that Belarusians who participate in hostilities in Ukraine will face criminal persecution for mercenary activities. “Men killing men… How can we accept it? And then they will come here with the experience of killing people.” So far, Belarusian state bodies, however, have not launched criminal investigations against any of these combatants fighting on either side.

That Minsk avoids unnecessarily antagonising Kyiv is clear from this stance even as it is widely publicised of cases of participants in Donbass war. For instance, on 27 July, a co-chairman of the oppositional organisation “Young Front” Eduard Lobau announced that he had gone to Ukraine to “aid brotherly people in its struggle against the common enemy [Russia].”

He is not the first opposition activist to do so, and earlier former political prisoner Vasil’ Parfiankou also joined the battalion of the Organisation of Ukrainian Nationalists. These are not individual cases. On Friday, Nasha Niva announced that all Belarusian nationalists fighting in Ukraine would be assembled into one military unit.

Some public statements of Belarusian officials may follow not only from their concerns about the destabilisation in Ukraine but also from the domestic political context. A case in point is the statement by Zas’ who on 2 July said,

We are carefully watching the situation in Ukraine. It is necessary to fortify the borders, to maintain public order. And the most important point is that our people, our countrymen shall understand the value of peace and serenity, realise that they are fragile and defend them.

Before the October presidential election in Belarus, these words sound as a warning about danger the of massive protest actions.

Belarus faces ever more risks related to the conflict in Ukraine. These risks can ruin the country and its independence, if destabilisation and foreign intervention occurs. Yet these risks can also help Minsk to move on the way to changes and building a viable independent statehood. Both scenarios are probable, and much depends not on Belarus.

Siarhei Bohdan is a senior analyst of the Ostrogorski Centre and a PhD candidate at Freie Universität Berlin. He is an alumnus of the Belarus State University and European Humanities University in Lithuania.