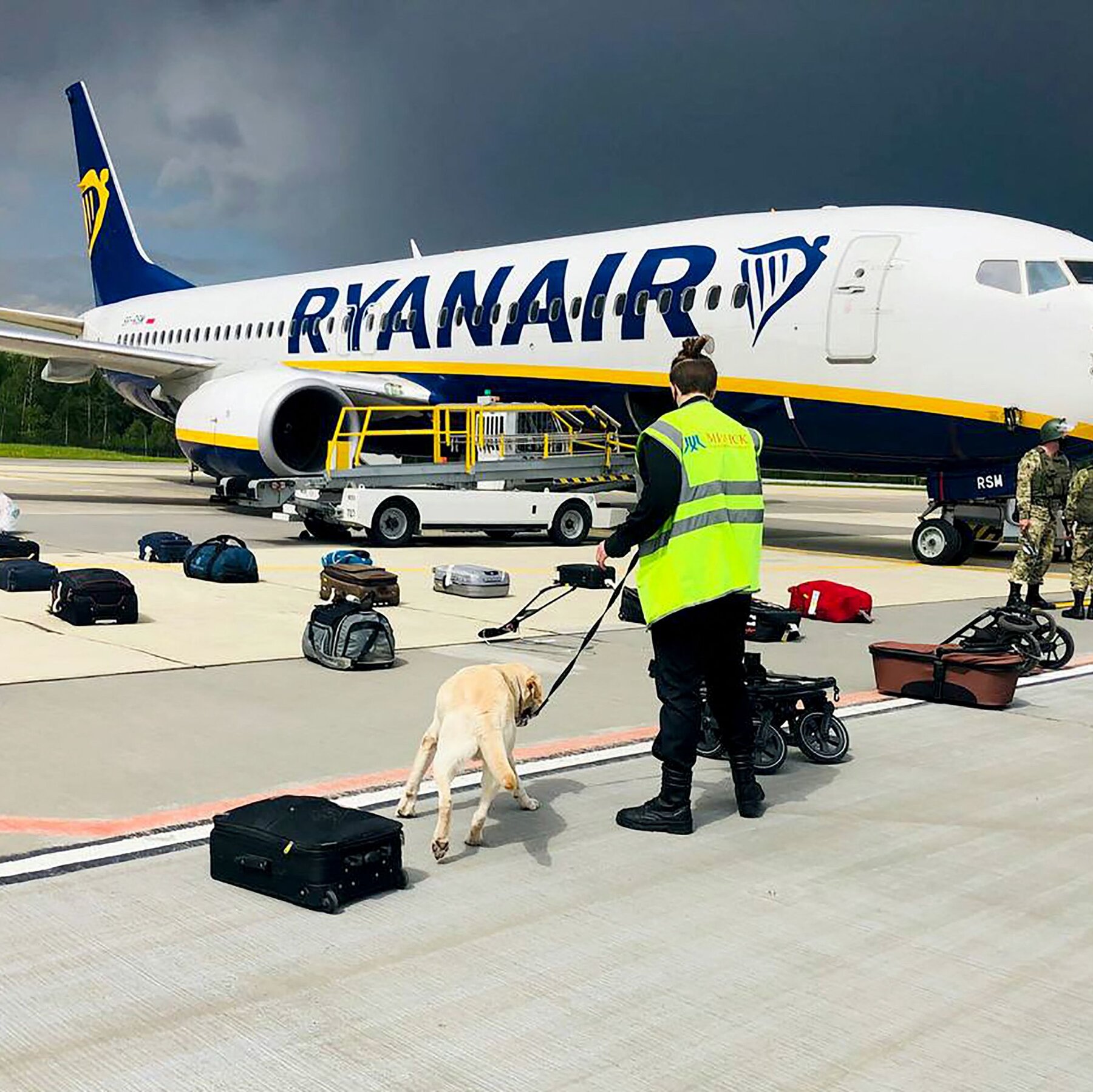 On May 23rd, Belarusian authorities scrambled a fighter jet and flagged what turned out to be a false bomb alert to force a Ryanair plane to land.

When the civilian plane landed, authorities arrested an opposition figure who was on board, drawing condemnation from Europe and the United States.

Roman Pratasevich was arrested after the flight in which he was traveling was diverted to Belarus, allegedly after a bomb threat, in what the opposition and Western officials denounced as a hijacking operation by the government.

Four others also didn’t complete the trip to Vilnius.

Passengers were taken off the plane in Minsk.

After the plane arrived in Vilnius, Defense Minister Arvydas Anusauskas said Pratasevich’s girlfriend and four other people did not reboard.

“We will find out who are the other four that did not travel with the rest. Lithuania has launched an investigation to find out what really happened on that plane,” he said on Facebook.

Flight tracker sites indicated the plane was about 10 kilometers (six miles) from the Lithuanian border when it was diverted. There were conflicting accounts of the move.

The press service of Belarusian President Alexander Lukashenko said the president himself ordered that a MiG-29 fighter jet accompany the airliner after he was informed of the bomb threat. Deputy air force commander Andrei Gurtsevich said the plane’s crew made the decision to land in Minsk.

Ryanair said in a statement that Belarusian air traffic control instructed the plane to divert to the capital.

Lithuanian President Gitanas Nauseda called the incident a “state-sponsored terror act.” He said that the European Council would discuss the case Monday and that he would propose banning Belarusian planes from European Union airports and “serious sanctions” against Lukashenko’s government.

“Belarusian airspace is completely unsafe for any commercial flight, and it should be deemed this not only by the EU but by the international community. Because now, this instrument could be used for any plane crossing Belarusian airspace,” said Lithuania’s foreign minister, Gabrielius Landsbergis.

Pratasevich is a co-founder of the Telegram messaging app’s Nexta channel, which Belarus last year declared as extremist after it was used to help organize major protests against Lukashenko. The channel is operated from Poland.

“It is absolutely obvious that this is an operation by the special services to hijack an aircraft in order to detain activist and blogger Raman Pratasevich,” she said in a statement. “Not a single person who flies over Belarus can be sure of his safety.”

It is utterly unacceptable to force @Ryanair flight from Athens to Vilnius to land in Minsk.

ALL passengers must be able to continue their travel to Vilnius immediately and their safety ensured.

Any violation of international air transport rules must bear consequences.

NATO Secretary-General Jens Stoltenberg said in a tweet that the incident was serious and dangerous and required an international investigation.

Other EU leaders and foreign ministers condemned the incident.

EU High Representative for Foreign and Security Policy Josep Borrell called for an international investigation into the incident with the Ryanair landing in Minsk.

The head of the US Senate Foreign Affairs Committee Bob Menendez, together with colleagues from the Czech Republic, Latvia, Germany, Lithuania, Ireland, Poland and the UK, issued a statement regarding the incident with an emergency landing of the Ryanair plane in Minsk and called for a ban on all flights over Belarus.

“We call on the International Civil Aviation Organization (ICAO) to immediately investigate this apparent violation of free transit between states and threats to aviation,” said a statement released by Menendez’s press office.

“ICAO is strongly concerned by the apparent forced landing of a Ryanair flight and its passengers, which could be in contravention of the Chicago Convention,” it said.

“We look forward to more information being officially confirmed by the countries and operators concerned.”

“We strongly condemn any interference or requirement for landing of civil aviation operations that is inconsistent with the rules of international law,” said the International Air Transport Association.

“A full investigation by competent international authorities is needed.”

Misses von der Leyen(daughter of a politican), nobody voted for ur 4TH REICH Dictatorship!!!!

98% of europe hates u, your a liar and cheater!! She even cheated with her doctoral thesis(like most german politicians)

For me its unacceptable to have a dictator like u or the warlord jens stoltenberg(pentagons lobbyist)!!!

The rotten corrupt/criminal/kleptocratic Witch from the illegitimate unelected EU-Junta is a proven pathological liar and traitor, the apple falls not far from the tree. Her father was a traitor + real piece of work and shit he when he was Governor [Ministerpräsident] of Lower-Saxony he ordered the criminal Deep-State-Terrorists from the BfV [Verfassungsschutz] to stage a false-flag Terrorist attack, they planted a bomb in a prison in Celle [the infamos ‘Celler Loch’] they pinned it on the boogeymans back then to push a unconstitutional/undemocratic ‘Security Law’ for the Regime. That’s what the BfV mostly does for the Regime as well today.

Well done! They got this corrupt/criminal traitor scum, he’s a total sell-out paid by AmeriCunts + Brits Deep-State Regime-Change + Color-Revolution Outfits, by NATO-Mafia + Soros-Mafia as ‘Their’ Agent-Provocateur, Wannabe Putschist, Propagandist and Terrorist. I hope he’s jailed for life and more Traitors of the western sponsored twice failed ‘Coup D’éta’ attempts will be snatched and get what they deserve.

Exactly, they call him “opposition figure”, while protestors from Washington DC they call “domestic terrorists”. This one is more terrorist than them. Bravo for Lukashenko, Belarus and Russia should unite and he should be the president!

Any info on this guy,such as who funds him?

NGOs, he used to work for radio free europe and some story about him working as press officer for Asov battalion in Ukraine, can’t find much online about that though. In short, the usual suspects recruiting nazis to do their dirty work. I bet he shit his pants when they said the plane was landing in Minsk!

Where was the outrage from mass media when US forced Bolivia’s presidential plane down in 2013 because they believed Snowden was on board? Fuck the hypocritical, lying NATO media

Actually it was the jewropean cunts (FrItEsPt) which denied passage at the pindo’s incitement, forcing he plane to land in Vienna.

What’s good for the goose is good for the gander. The US/nato sponsored ‘revolution’ in Belarus has lost all its colour. The usurpers got usurped before they could cause more trouble on behalf of their US/EU pimps.

SPARTANS ARE NOT GAY BUT ORTHODOXY PLENTY OF GAYS IN THE UK ,EU,USA THOUGH SADLY= PROVEN! CAREFULL WHAT BULLSHT YOU READ IT VERY WELL MAY DESTROY YOU TOO!

The Spartans had a special regiment where all the men were gay and had long male time partners. They lived together, trained together, fought together, did everything together, because the generals thought they would perform harder and longer, excuse the pun, if the life of their loved one depended on their lack of effort.

Remember Evo Morales being hijacked over Austria on the 7 th of July 2013. And we have now these indignant and éthical personalities giving the Biélorussians lessons.

What had “Ahem, I’m a woman so give me your chair” Ursula to say about the Presidential aircraft of Bolivia being forced to land so that the empire could check to see if Edward Snowden was aboard?

Same old Nazi propaganda, and they expect it to work still.

amerikan never strong—22 LGBT military vets commit suicide daily in USA “only in USA has the dignity of the father ceased to exists”. Horkheimer/Adorno “amerikan males — feminized by the the tyranny of the school mar’m”. Daniel Boorstin “only in amerika is the father vestigial; the amerikan mind and conscience is feminine”. Geoffrey Gorer amerikan weak condemnation—cry like girl in brothel when hindoo gang rape and only pay rupee

Russians and Chinese sell their girls
Reply to  yuri

homosexual amerikan cannot swim, lose all wars…backward uncivilized. LOL! consume far more alcohol per capita than Russians—more marijuana, coke heroin,meth, LSD per capita than all peoples “amerikans are not at all happy. they feel themselves lacking in something. all the sensitiveness has dried up in them. the crystallization of love is impossible in USA. I admire their kind of happiness but I do not envy it: it is the happiness of a different and inferior species”. Stendhal there is some LOL for you!

“amerikans love big because they feel so small”. Philip Slater

Uh huh, these EU politicians are just reeking of hypocrisy. They’ll bend over a barrel at the click of a finger to get fucked in the ass by their Zionist overlords, keeping their mouths very well self-gagged about their complicity in a multitude of crimes (most relevant to this story would be how far they’re willing to bend over when it came to them grounding a certain Latin American president’s plane on mere Suspicion that Edward Snowden was on it).

P.S. Someone should ask how that Black Box from MH17 is doing. Maybe they should wipe the dust off it and unbox the truth (hah, right), if they haven’t sledgehammered it beyond recognition in some hidden locked room in London.